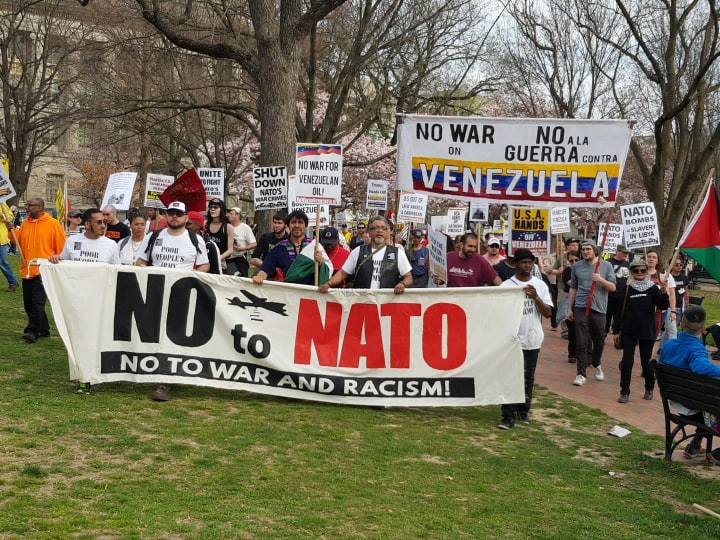 Anti-NATO protesters also condemned the coup attempt in Venezuela organized by the US and its proxies.

Leftist groups and peace activists across the world held protests on the occasion of founding anniversary celebrations of the North Atlantic Treaty Organisation (NATO). The 70th anniversary of the organization was celebrated in Washington DC on April 3, at an event hosted by US secretary of state Mike Pompeo.

In Scotland, various peace groups protested in Edinburgh and Glasgow on April 4, and said the western military alliance “represents a major threat to peace in our world”.

According to a Common Space report, Pete Cannell, an anti-war activist in Edinburgh, said,  “A peaceful future where humanity tackles the crises of the 21st century would be one without the western military alliance”.

The Canadian Peace Congress issued a statement in which they said, “Ever since its founding in April 1949, NATO has served as the vehicle to spur the arms race in the name of ‘peace through strength’.”

“Every time peace activists in Canada raise demands to cut military spending, or to get Canada to sign the UN Treaty to abolish nuclear weapons, or to oppose Canadian arms deals with Saudi Arabia or support other peace initiatives, we are told the same thing by Ottawa and the military-corporate-complex it serves – that this would violate our ‘obligations’ under NATO. That is why withdrawing from this aggressive military alliance is such a central and pressing priority if we are ever to win a truly sovereign and independent foreign policy based on peace and disarmament, not militarism and war. Of course, withdrawal would be only the first step in winning a fundamentally new program for Canada, but it is a necessary and vital step in that direction,” the statement said.

Alexander Neu, German MP from Die Linke (The Left) wrote in Die Freiheitsliebe that NATO poses a significant security risk to the world, using its military force solely to safeguard its own imperial interests. He said the alliance systematically breaks existing law and discredits the United Nations.

Citing the illegitimate and criminal intervention of NATO to defend the ousted dictatorship in Portugal during the Carnation Revolution on April 25, 1974, the Portuguese Communist Party (PCP) denounced the celebrations.

The PCP said, “NATO’s 70th anniversary must be signaled by the strengthening of unity in action the forces of social progress and peace in the struggle for disarmament; against the interference and aggression of imperialism, as in Venezuela; respect for the UN Charter and international law; by the dissolution of the political-military blocs”.

“The aggressive strategy of imperialism, of which NATO is a fundamental instrument, is endangering world peace and threatening humanity.The dissolution of NATO is a requirement of the defense of peace,” PCP added.

On March 30, the United National Antiwar Coalition organized a protest demonstration in Washington. The protesters also extended their solidarity with the Bolivarian Republic of Venezuela which is facing a criminal coup attempt organized by the US and their proxies.

Sputnik reported that protesters had raised placards and banners with various slogans including “Unite to Fight NATO’S Racist Wars”, “Hands off Venezuela”, “NATO Bombs=Slavery in Libya,” “NATO Killed One Million IRAQIS”, “Shut Down NATO’S War Crimes”, “No War on VENEZUELA”, “US Sanctions Caused Venezuela’s Crisis”, and “US Out of Latin America And Caribbean”

The International Peace Bureau noted that “NATO is the largest military alliance in the world with the largest military spending and nuclear stockpiles. While claiming to “preserve peace,” NATO has violated international law and bombed Bosnia and Herzegovina, Kosovo, Serbia, Afghanistan, Pakistan, and Libya. NATO has exacerbated tensions with Russia and increased the risk of nuclear apocalypse.”

Earlier, communist parties and other progressive sectors around the world, especially in Europe, organized various events to commemorate the victims of the NATO attack on Yugoslavia on the 20th anniversary of the invasion.

NATO was formed in April 4, 1949, in the aftermath of the World War II in an attempt to counter the growing influence of the Soviet Union and to ensure the continued influence of the US in Europe. Since then, NATO interventions have sought to promote US imperial interests, and have often led to widespread chaos across the world. These days, NATO has been desperately making moves to expand in the Balkans and eastern Europe in order to counter Russian influence in the region. This is despite assurances by US officials in the early 90s that NATO would not seek to extend its influence in the area.