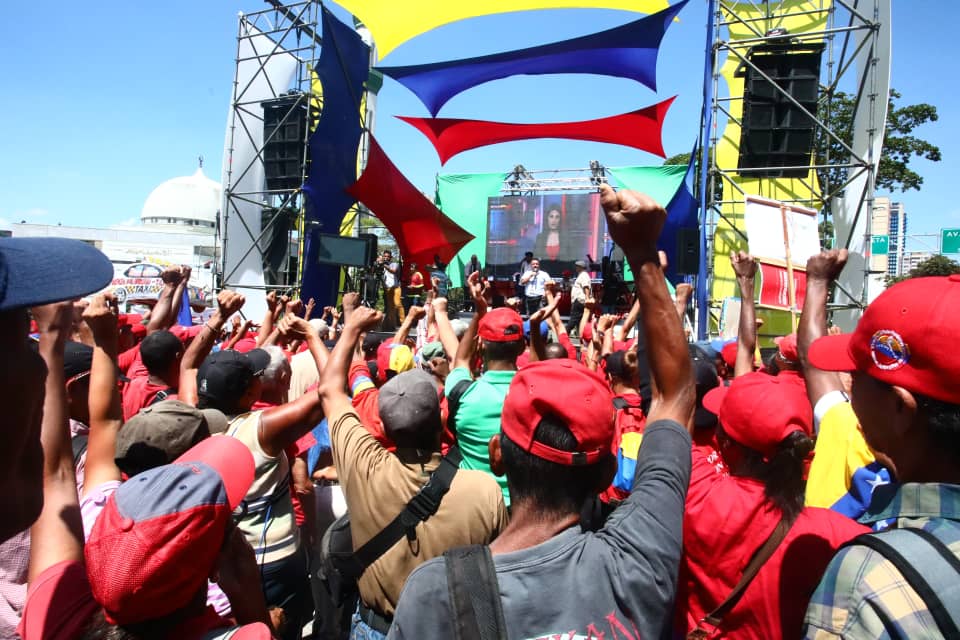 On April 6, tens of thousands of supporters of the Bolivarian Revolution once again flooded the streets of Caracas, Venezuela, to ratify their support for the constitutional government of the democratically elected president, Nicolás Maduro, and to reject the imperialist interventions of the United States and its allies in the region.

The Chavistas mobilized in defense of national sovereignty and peace from different locations in Caracas and marched to the Miraflores Palace, the office of the president of Venezuela. At the Miraflores Palace, the multitude was received by president Maduro. He expressed his gratitude to the people and urged them to continue resisting imperialism. “We have marched again and we will march every day if necessary, to guarantee peace and tranquility of our country,” he said.

The president addressed the Venezuelan people about the investigation of the attacks against the national electric system and pointed out that the recent attacks were carried out from Chile and Colombia. “I had denounced the attacks directed from Houston and Chicago (United States), now we have discovered new sources from Chile and Colombia to damage the Venezuelan electrical system,” said Maduro. He stressed that such imperialist aggression affects the quality of life and the right to economic development of Venezuelans.

During the month of March, Venezuela suffered two brutal electrical attacks on the national electric system, which left 80% of the Venezuelan population without electricity and affected their everyday life. The first series of cyber attacks on the Guri hydroelectric plant in Bolivar State happened from March 7 to 9. The second electrical sabotage happened on March 25.

Maduro requested the governments of Bolivia, Mexico and Uruguay and Mexico, the guarantor countries of the Montevideo agreement, to reactivate the accompanying measures for international negotiations, to help Venezuela achieve a process of dialogue for peace and prevent the continuation of terrorist attacks against Venezuelans. “I call on the presidents of Mexico, Andrés Manuel López Obrador; of Uruguay, Tabare Vasquez; of Bolivia, Evo Morales, and the prime ministers and heads of states of the 14 Caribbean countries, members of Caricom, to resume the initiative of dialogue signed in Montevideo two months ago,” he said. “I ratify all my support, my will to seek a way of dialogue, negotiation and agreements for the good of Venezuela and its future. Let’s put all the cards on the table and stop the terrorist attacks and ambushes,” he added.

On January 31, the governments of Uruguay and Mexico declared their support for peaceful dialogue in Venezuela so their problems could be resolved among themselves. The presidents of the two countries called for an international conference of the Latin American and Caribbean nations, which was held on February 7 in Montevideo.

The march on April 6 was called for by the United Socialist Party of Venezuela (PSUV). President Maduro also invited people to join the patriotic march. “April 6, we are all going to fill the streets of Caracas with popular joy and colors so as to ratify Venezuela’s anti-imperialist spirit. Together, within a permanent mobilization, let’s continue defending national peace and independence. No more interference!” tweeted Maduro.