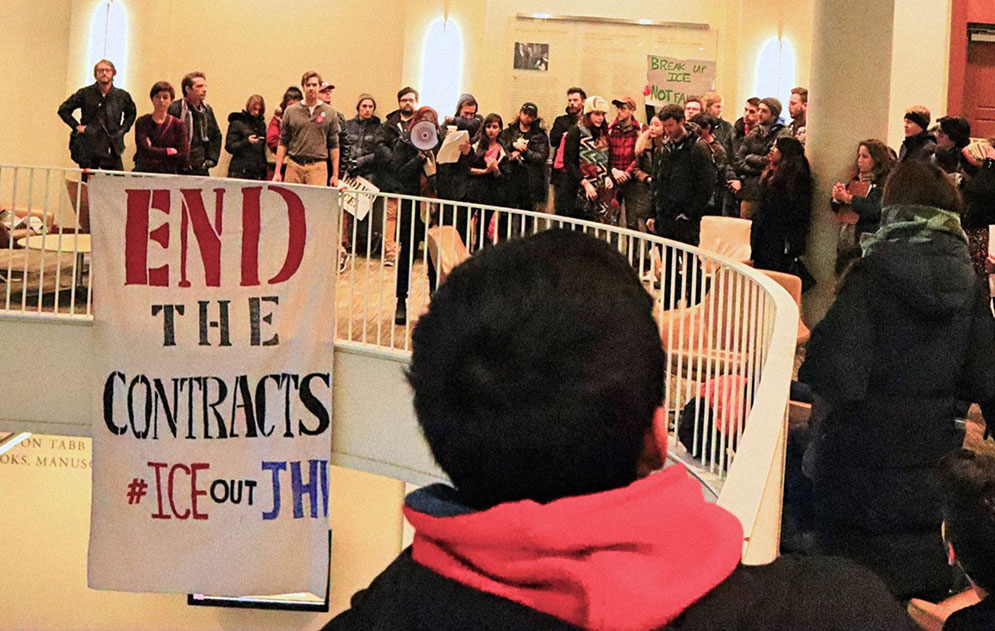 Students and faculty members have been protesting and petitioning against the university’s association with ICE since October 2018. File Photo

A protest by students and faculty at the Johns Hopkins University (JHU) against the institution’s association with the US Immigration and Customs Enforcement (ICE) entered its fourth week on April 23. The students are also expressing their anger at the proposed deployment of a private police force with jurisdiction within and around the campuses.

The students are demanding that the university withdraw all contracts with ICE and abandon plans to constitute a private police. They are also demanding that the university pledge the amount received in profits with ICE contracts to the Baltimore Immigration Defense Fund. The legal defense fund was set up by the city administration of Baltimore in March 2018 to aid refugees who are victims of the Trump administration’s crackdown. Other demands include the recognition of workers’ unionization in the university, as well as student and faculty representation on the university’s board of trustees.

Students and faculty members have been protesting and petitioning against the university’s association with ICE since July 2018, when JHU was set to renew the contracts of ICE with its constituent faculties, the School of Medicine (JHUSOM) and the School of Education. The contracts provide various training programs and certificate courses for law enforcement officers, including those of ICE. The JHUSOM has been associated with the ICE since 2004. The school’s Center for Law Enforcement Medicine has provided specialized physician oversight and has trained federal law enforcement personnel as paramedics and emergency medical technicians.

According to the university’s official news portal, The Hub, they “do not see their work as an endorsement of current immigration policies” but the protesters have argued otherwise. In an interview with Democracy Now!, Mariam Banahi, a doctoral student at JHU and a participant at the sit-in, stated, “The administration puts [the contracts] in terms that it’s supportive of medical care and things like that, rather than actually supporting the detaining of asylum seekers. However, we see that as a kind of abstraction of the violence being enacted, because they support the actual structures that facilitate the workings of ICE.”

The university administration makes millions of dollars through these contracts. According to the university gazette, when the School of Education signed a contract with the ICE in 2009, it received a total of USD 11.4 million. But this is just the tip of the iceberg with regard to JHU’s involvement in the military industrial complex, said an op-ed written by three current and former students in the Baltimore Sun, published in July 2018. According to a Vice News list of most militarized universities in the US, JHU is among the top defense contractors in the country.

The university’s association with the military is also reflected in its plans to create its own police force. It tried to push for a legislation in the State legislature of Maryland, first in 2018 and then this year. The latter attempt was successful. Students and members of the communities where the university’s different campuses are located have vehemently protested this move.

For the students, it marks the militarization and policing of campus spaces. The residents of the neighborhoods of the university campuses find it extremely disconcerting that JHU, being a private establishment, is allowed to raise a police force with jurisdiction over them. In an interview with Democracy Now!, Chris Bilal, a member of the Students Against Private Police, stated, “Johns Hopkins University knows better and knows that more policing does not equate with less crime, but that more policing actually causes gentrification… causes the extraction of wealth from communities and also normalizes state-sanctioned violence and terror.”

The university’s president, Ronald Daniels, has refused to engage with the protesting students. Daniels has previously defended JHU’s association with the ICE, stating that working with the agency does not imply endorsement of their policies.

The policies and measures of the ICE have faced significant criticism, especially because of its history of sexually abusing undocumented immigrants. Recently, it has come under attack from progressive US citizens and international organizations. In April 2018, the Donald Trump administration declared an ongoing “zero tolerance policy” against undocumented immigration. The measures implemented by ICE following this policy included separating children from their families as a supposed deterrent to potential undocumented immigrants, who might cross the US-Mexico border. The policy separated hundreds of children from their guardians and parents, most of them without proper documentations, making reunification extremely difficult. The administration had to eventually put a halt to the policy in June 2018 after national and international outrage and a federal judicial verdict, but the policy reportedly continues on a smaller scale.