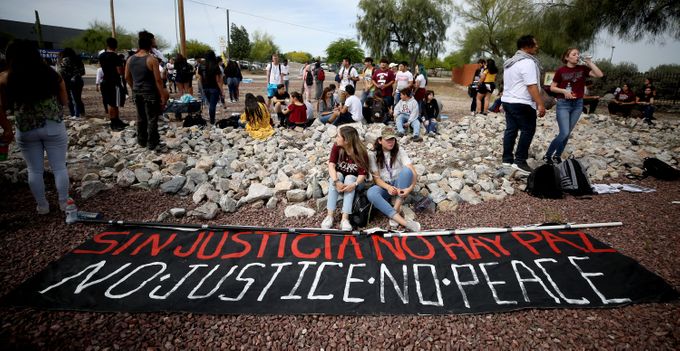 Over 120 students at Desert View High School in Tucson, Arizona, walked out of their classes on May 7, protesting the detainment of their classmate, Thomas Torres-Maytorena, an undocumented, Mexican-American immigrant, by the US Customs and Border Protection the week before. The students organized a rally in front of the school’s campus and marched to the sheriff’s department headquarters, demanding the release of Torres-Maytorena before his graduation. They also called on all law enforcement agencies to cease collaboration with federal immigration authorities.

Torres-Maytorena’s schoolmates marched nearly 6 km from their high school, chanting “Free Thomas Now!” and holding banners that read “Without Justice, There Is No Peace”, “Thomas is the American dream” and “Abolish the Border Patrol”.

The high school senior was detained after deputies from the sheriff’s department stopped him at a traffic light, purportedly for a “routine” verification of the vehicle’s registration. They contacted Border Patrol and turned him over to the federal authorities after he revealed that he did not have a license since he was undocumented.

The 18-year-old left Mexico as a toddler and has since been residing in the US with his extended family. He is scheduled to appear in the immigration court to fight deportation to Mexico on May 22, which is also the day that he is scheduled to receive his high school diploma.

For the Latin American and Hispanic students of Desert View, Torres-Maytorena’s detention is a grim reminder of the threat that they face under Donald Trump’s hard-line, anti-immigration administration. Over the last couple of years, citizens of Tucson have witnessed increased cases of racial profiling and of law enforcement being given a free hand in immigration issues.

“We feel that any of us could be taken,” said Daffne Anselmo, a friend of Torres-Maytorena’s. He said that they could be detained “just because of a race that we are.”

The sheriff’s department recently voted to accept federal funding as part of Operation Stonegarden, which enhances coordination among local, state and federal law enforcement agencies to secure US borders. Residents fear that the grant would encourage racial profiling through increased collaboration between Border Patrol and the sheriff’s department.

“Collaborative law enforcement operations between our local sheriffs and federal immigration agencies are oppressive and harmful to the most vulnerable in our community,” said resident Ryan Kelly.

Trump’s crackdown on undocumented immigration has become an acute issue for immigrant students who are being increasingly targeted by the federal authorities. For many, Torres-Maytorena’s detention is reminiscent of Dennis Rivera Sarmiento’s detention in 2018, when the 19-year-old student faced deportation to Honduras after getting involved in a schoolyard scuffle with one of the other students.