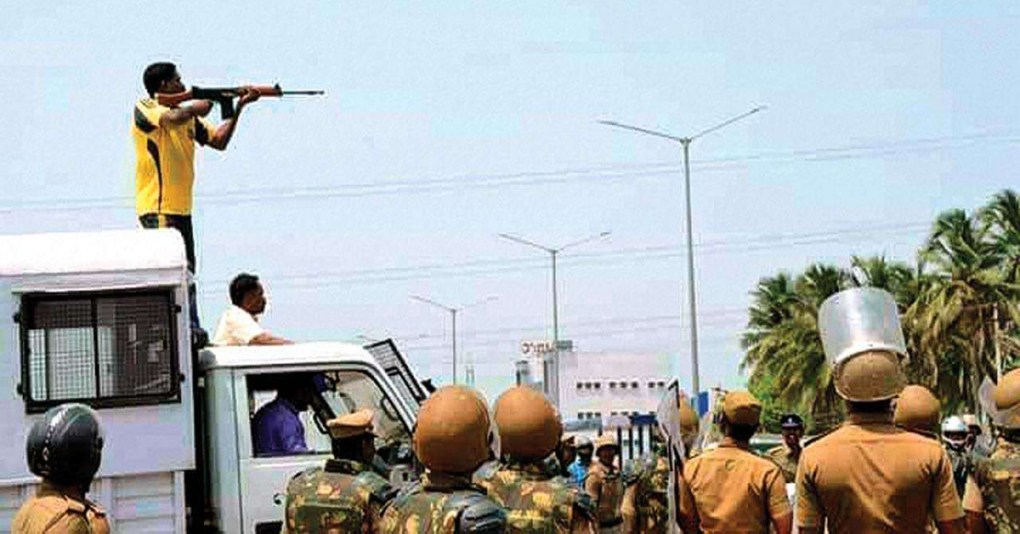 A year after 13 protesters were massacred in the Thoothukudi police firing, the people of souther Indian state of Tamil Nadu paid tribute to the victims who were fighting against the Sterlite Copper Smelter Plant owned by Vedanta group. On May 22, 2018, the police had opened fire at a march which was taken out on the hundredth day of a continuous protest against the severely polluting Sterlite plant, injuring several hundreds of protesters.

On that day, thousands of people had participated in the march towards the District Collector’s Office demanding the closure of Thoothukudi Sterlite plant but had got bullets as response from the government of Tamil Nadu. The District Collector was conspicuous by his absence on a very critical day. The administration was literally under the control of the police department.

Even after year, the situation has not changed much. The district police department even denied permission for public meetings to mourn the death of the victims on the first anniversary.

The residents of various villages around Thoothukudi town had been protesting against the Sterlite plant ever since the plant became operational in the year 1996. However, the protests gained steam after several gas leakages, and severe air and water pollution were reported in the recent past. The protesters claim that cancer and other respiratory diseases have been on an increase during the last several years.

As a result, the people had taken out a peaceful march towards the District Collector’s office when the police opened fire. Videos and photographs showed policemen in plain clothes firing from the top of police vehicles with long range sniper guns. Civil rights activists claim that the riot like situation was created by the police and not by the protesters. The television channels which were live telecasting the march stopped the telecast for reasons best known to them.

Edappadi K Palaniswami, the Chief Minister of Tamil Nadu replied in a press conference that he came to know about the police firing only after watching the news channels which drew severe criticism from all quarters. The Bharatiya Janata Party state president Tamilisai Soundararajan even went to the extent of commenting that the police firing was done in order to protect the life of thousands of other protesters.

Later, the government went on to claim that an officer in the rank of Deputy Tahsildar concerned had ordered the police to fire. The question of how a deputy tahsildar is empowered to order police firing remains unanswered.

CBI YET TO FILE CHARGE SHEET

Considering the pathetic way in which the All India Anna Dravida Munnetra Kazhagam (AIADMK) government handled the issue, the Madurai bench Madras High Court ordered a Central Bureau of Investigation enquiry during August 2018. The order was passed after hearing a number of Public Interest Litigations filed before the court. The court also ordered the CBI to file the charge sheet within four months. But the charge sheet has not been filed so far.

The government went on to claim that certain anti-social elements infiltrated the protests and started to attack the government offices. However, the video footages and photographs submitted by civil rights groups strongly refute such claims of the government.

The CBI too seems to have taken the same path of the AIADMK government in denying justice to the victims.

The district administration denied permission to all organisations which requested permission to mourn the death of the firing victims citing law and order issues. The Sub Judicial Magistrate (SJM) even issued notices to the anti Sterlite activists as per the Code of Criminal Procedure section 107 and summoned them to appear before the SJM. The summons demanded explanation on why action should not be taken against them and demanded to submit an undertaking that they will not be involved in anti-government activities for the next six months. The move was severely criticised by the opposition parties as an attempt of victimisation. The anti-Sterlite activists claimed that the state government is acting on the behest of the vested interests. The various organisations and political parties are conducting the anniversary in closed door meetings.

The Madurai Bench of the Madras High Court severely condemned the move of the district administration to issue notices to the activists today. The court questioned why the notices were issued when government itself has decided to close the Sterlite plant which is also the demand of the protesters. The court has also ordered not to take any final decision on the notices issued to the protesters.

Meanwhile, the Vedanta group has been strengthening its roots in the state of Tamil Nadu. Cairn Oil and Gas, a subsidiary of Vedanta has obtained permission to drill 274 exploratory wells in the delta district of the state. The project is estimated at a cost of Rs 13,550 crore and spread across more than 4,000 square kilometres apart from few thousand sq kms in the Bay of Bengal. Each well dug in the land surface will be 3,000 to 4,000 meters deep. The Vedanta group has even demanded exemption from conducting the mandatory public hearing for obtaining the clearance from the Ministry of Environment, Forest and Climate Change.

Farmers and fishermen have been continuing their demonstrations against the project which will demolish the ‘Rice Bowl’ of the state. They fear that their livelihood will be affected by such projects. In this protest too, the union and state governments are not considering the plight of the stake holders and have resorted to the use of brute force to suppress the struggle of the farmers.

The Bharatiya Janata Party government’s eagerness to promote the private players was once again evident in the priority given to Vedanta group overlooking the ONGC. Due to the central and state government’s apathy, the fate of the delta farmers too is hanging on the balance like the anti-Sterlite protesters.

(The article first appeared on Newsclick.in)