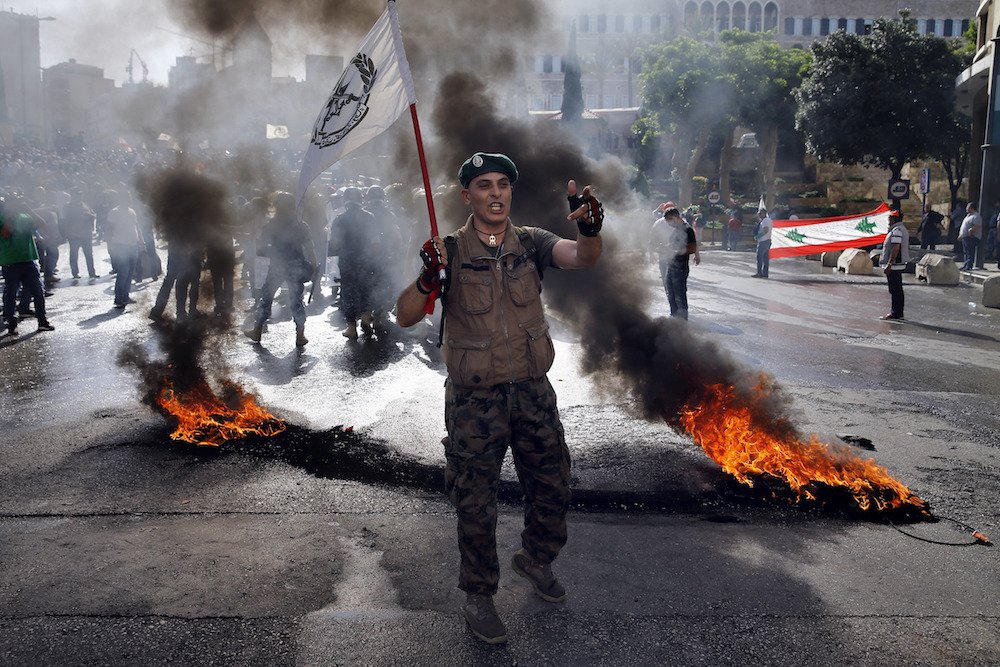 Anti-austerity protests were held outside the Government house in downtown Beirut on May 20 as the Lebanese cabinet met for its 16th session to reach an agreement on the highly divisive austerity cuts. Lebanese security forces used water cannons on more than 100 protesters in an attempt to prevent them from advancing towards the Grand Serail, the location of the prime minister’s office.

The protesters clashed with the police and tried to push back the police lines. They also set fire to tires outside the building. One protesters and two policemen were injured in the clashes. The protest was joined by public and private school teachers, as well as retired soldiers and military veterans.

On the same day, veterans protested outside the central bank against cuts to pension and benefits that the government might introduce in its budget to combat the fiscal deficit. Around 100 veterans gathered outside the central bank building, telling reporters that they aimed to stop bank employees from entering the building on Monday morning. General Sami Ramah, spokesperson for the retired soldiers, said that they would picket the bank until their demand was met. Protesting ex-soldiers also blocked roads with burning tires to protest cuts to their pensions and benefits. Protesters blocked the banks’ three entrances, including the one for vehicles.

Retired soldiers and military veterans had picketed the country’s central bank on May 12 and protested outside the prime minister’s office on May 10 against the proposed austerity measures. On the first occasion, they burnt tires and chanted slogans, calling Lebanon’s leaders “thieves” and claiming that they were being forced to pay for the mistakes and failures of “ineffective” and “corrupt” politicians.

Prime minister Saad al-Hariri’s coalition government is seeking to frame a budget that will reduce the deficit. Lebanon currently has a public debt equivalent to 150% of its gross domestic product (GDP). The draft budget aims to reduce the deficit to below 9% of the GDP from 11.2% in 2018. These are in line with recommendations of international finance organizations which deem the reduction of the deficit to be important even at the cost of reducing benefits for people.

Lebanon must also implement fiscal and economic reforms in order to obtain the USD 11 billion worth of pledged loans by international donors in the Economic Conference for Development through Reforms with the Private sector (CEDRE) conference last year. One of the proposals in the draft budget suggested cutting wages and benefits of public sector employees, including army veterans.

Protesters demanded that the government first target “corrupt businesses and politicians” instead of people from the working and salaried classes in its attempts to reduce the deficit and budget gap.

The protesters met the country’s defense minister, Elias Bou Saab, on Friday. They said that Saab assured them that their demands had been met and articles in the draft budget pertaining to the 3% cut in veterans’ pensions have been removed.