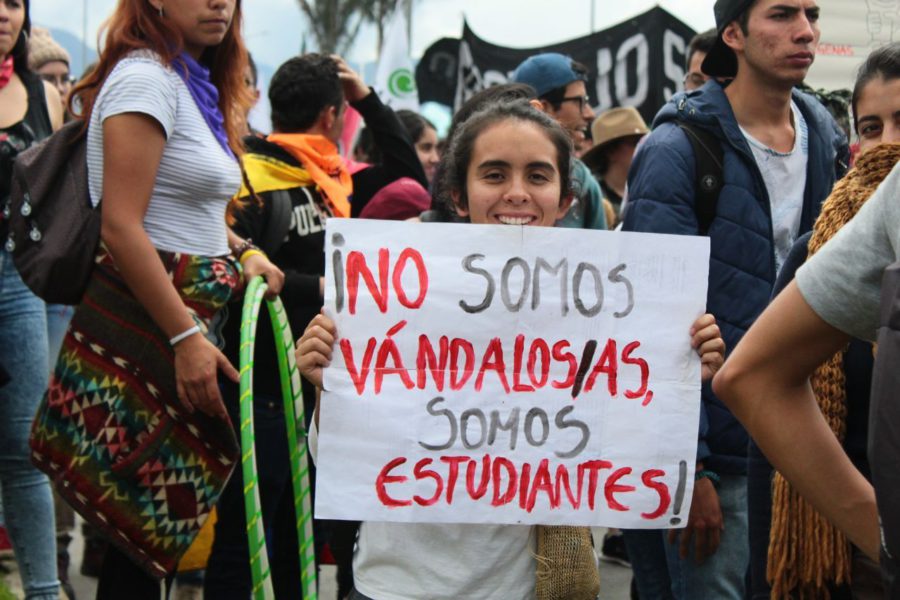 “We are not vandals, we are students”. Photo: Colombia Informa

Last week, on May 20, a letter signed by the Bloque Universidad de Antioquia de las Aguilas Negras (the Bloc of Black Eagles in the University of Antioquia), threatening six students and various student organizations associated with Institutes for Higher Education (IES), began circulating on the university campus. In the letter, the six students were named and warned directly not to enroll for the next semester or else they would be declared as military targets.

The student leaders and organizations mentioned in the letter actively participated in the countrywide student strike and mobilizations in October, November and December last year to demand that the government increase the budget for public higher education.

“The time of social cleaning of the UdeA [University of Antioquia] is approaching (…). The rebels who supported strike, are reminded that you come to the university to study and not wanting to change the country, (…). You are a hindrance to the university, we have identified you and we know where you live,” read the letter.

Several different student and human rights organizations have condemned the stigmatization and threats to students and have demanded that the national government and the university rector take necessary action and ensure the safety and integrity of the threatened students.

The Faculty of Social Sciences and Humanities of the university released a statement, condemning any types of violence in the university space, saying that it should not be a space of controversy, confrontation or violent threats.

Students are demanding that the authorities investigate this case with the same rigor as they did in January with the false reports of possible infiltrators of the members of National Liberation Army (ELN) in the university.

The Aguilas Negras or Black Eagles is a far-right paramilitary group operating in Colombia since 2006. The group is involved in several illegal activities, such as extortion, robbery, kidnapping, illegal gold mining and land theft operations. It has been continuously targeting social and peasant leaders. It is almost entirely financed from drug trafficking. According to experts, Aguilas Negras is a name used by far-right extremists in politics, private sector and security forces to impose terror.

(With inputs from Colombia Informa)

“In Arauca we have suffered every form of war”
RECENT ARTICLES