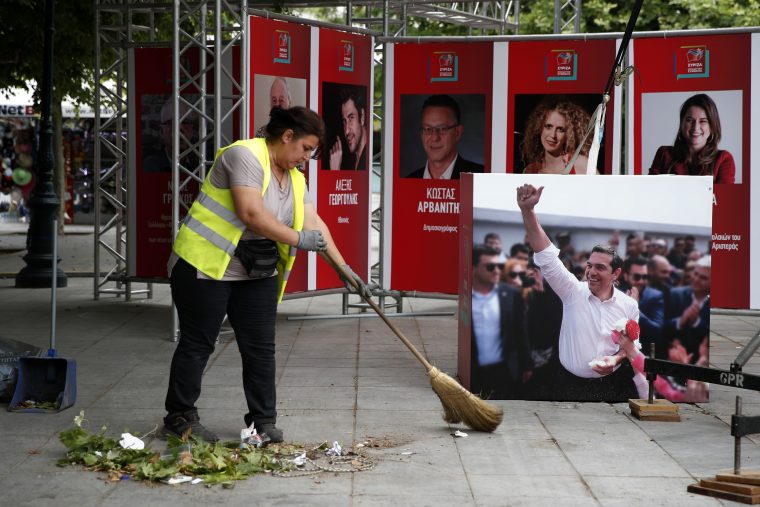 SYRIZA, which came to power riding a wave of anti-austerity protests, has lost a lot of popularity for continuing the previous governments' policies. Photo: National Herald

The ruling SYRIZA (Coalition of the Radical Left) party in Greece faced severe setbacks in the European Parliament elections and local body elections held on May 26. In the wake of the electoral defeat, Greek prime minister Alexis Tsipras called for early parliamentary elections, which will be held by the first week of July. The center-right New Democracy (ND) party emerged the leader, both in the European parliamentary elections, as well as the local body polls.

SYRIZA’s vote share declined from 35.5% in the 2015 general elections to 23.77% and only six of its candidates were elected as members of the European Parliament (MEPs). ND obtained 33.13% votes and eight MEPs. The center-left, led by PASOK, garnered 7.71% of the votes and two MEPs. Meanwhile, the fascist Golden Dawn party collapsed from 9.4% of the votes in 2014 to 4.87%, and got two MEPs. The right-wing Greek Solution party obtained 4.18% votes, with one MEP.

The vote share of the Communist Party of Greece (KKE) remained the same, at around 5.3%. Two of its candidates, Papadakis Konstantinos and Nicolaou-Alavanos Lefteris, were elected as MEPs. KKE candidates also won elections to the post of councillors in several municipalities and regions, and moved to second round elections in 5 cities, Patras (with 40.6% votes), Icaria (33.9%), Kaisariani (29.8%), Chaidari (25.4%) and Petroupoli (23.6%).

KKE general secretary Dimitris Koutsoumpas said the election results reflected the popular discontent with the SYRIZA government. In recent years, SYRIZA has implemented anti-people policies, following in the footsteps of the New Democracy and PASOK governments, and has been enticing people with “crumbs”. “However, it is not good that people turn to old and failed options like ND and PASOK / KINAL or to other forces that are ready to play the role of bulwark or complement an unpopular management government,” Koutsoumpas said.

“Of course, we do not underestimate the fact that the balance of power is still very negative in Greece and Europe, and that the popular worker movement has not yet passed into a phase of dynamic counter-attack. But the results of the KKE sent a message of hope to the communist parties and militant forces of other countries that are struggling in difficult conditions to trace a radical line of recovery and a grouping of the communists and workers movement in Europe, far from the deadly embrace of social democracy, from the embellishment of the European Union (EU) or the illusion of being able to reform it for the benefit of the popular interest and from the policy of integration and participation in the anti-people bourgeois management,” he added.

SYRIZA had risen to power in Greece in 2015, riding the high tide of the anti-austerity, anti-EU protests of 2010-2012, sparked by the economic crisis in the country. But after coming into power, the government backtracked on most of its promises and continued the austerity policies of the previous governments.