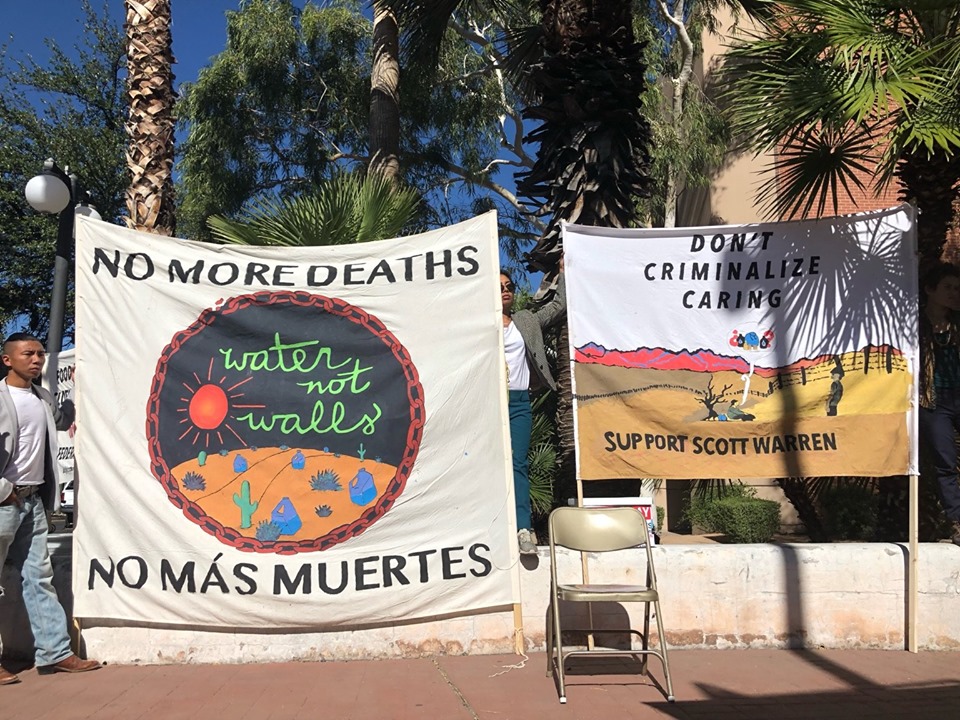 Scott Warren, an activist associated with the organization No More Deaths, is facing trial over federal charges that carry total maximum jail sentence of 20 years. Warren stands accused of one count of conspiracy to transport and harbor two migrants illegally into the United States and two counts of harboring ‘illegal’ migrants. Warren pleaded not guilty to all charges. No More Deaths has maintained that he and the organization have only offered humanitarian aid like food, water and medicine to the people trying to cross the international border through very harsh climatic conditions.

Warren along with the two undocumented immigrants were arrested in January 2018, by the US Border Patrol at a house at the edge of the town of Tuscon in Arizona, called “The Barn”. Warren’s trial has attracted national attention as it highlights the deep contradictions in US policy which triumphs “human rights” abroad, while it violates the basic human rights of migrants and even criminalizes citizens who attempt to provide humanitarian aid.

The Mexico-US border traverses through some of the harshest terrains in North America, especially the segment that borders the state of Arizona. Average temperatures often rise upwards of 50 degrees celsius. Many undocumented immigrants coming from Central America are escaping situations of violence and mass destitution. Their journey to the border is arduous and life-threatening. They walk over 150 kilometres on foot, with the hope of safety and jobs once they arrive.

Even though border crossing constitutes a minority of the cases of undocumented immigration in the US, the incumbent administration of president Donald Trump has focused on intensifying punitive measures to bring an end to cross-border immigration. Ever since coming to power in 2017, the Trump administration has pushed for a very strong punitive measures to deprive entire regions in the Chihuahuan and Sonoran deserts at the border, outside of normal human habitation, of food, water and other basic resources. Although this policy is not especially new, it has been intensified under the Trump administration and has been named “scorched-earth policy” by US media, likening it with an intense war tactics.

It has been estimated that since 2001, over 3,000 people have died trying to cross the border, either out of exhaustion and dehydration in the desert or after getting attacked by animals and robbers. In the region around Tucson, Arizona, which lies just under 100 kilometers from the US border, several humanitarian aid organizations like No More Deaths, Humane Borders and Tucson Samaritans have emerged after local communities have taken it upon themselves to bring down the deaths in the region.

However, they have been faced with numerous problems with the government. Tucson is one of the cities that lies within the “100-mile (160 kms) border zone”, where the Border Patrol has immense lease of power to stop and search and even investigate homes without warrants. It is also the place where the ‘scorched-earth’ policy has reportedly the most intense, with the region having a larger than average proportion of Border Patrol agents operating. This often comes in the form of confiscating and destroying supplies and resources put across the border region by aid workers.

No More Deaths have had their share of run-ins with the Border Patrol. They have previously accused the Patrol agents of destroying their water jugs, food packets and other supplies that they leave out in the desert for those crossing the border.

Border Patrol has a history of arresting and prosecuting people for leaving aid supplies in the desert, under charges of “littering” and “vandalism”. This is despite the fact that No More Deaths have constantly shared their protocol of action with the Border Patrol to keep themselves on the right side of the law, and have operated with more or less overt and tacit approval of the Patrol officers.

In 2018 January, the Patrol raided one of the facilities that the organization uses, called “The Barn” in Ajo where the organization conducts their aid operations in the desert. The Patrol agents found two undocumented migrants who were recuperate in the facility after being found in the desert suffering heat stroke and severe dehydration. Warren was arrested and charged for having harbored and transported “illegally” immigrants into the US.

According to the Liberation News, the raid came within hours of No More Deaths posting a video that showed Patrol agents dumping dozens of litres of drinking water, that they had left out for migrants. This has prompted accusations of the raid and the charges against the Scott Warren as vindictive and politically motivated.

In the trials that began on May 26, at the US District Courthouse in Tucson, dozens had assembled outside the court in support of Warren. His argument in the case has asserted that there has been no attempt on the part of him or the organization to transport or harbor any immigrants, contrary to what has been accused by the Patrol agents. His attorney Greg Kuykendall reportedly told the jurors, “Scott Warren never committed anything but basic human kindness.”

The assistant US attorney, Nate Walters, who represents the prosecution has disputed that the case is about No More Deaths or humanitarian aid, but about Warren’s intention of transporting people illegally and “to shield illegal aliens from law enforcement for several days.”

Nevertheless, the question of what constitutes humanitarianism, at a time when the government has actively created conditions at the border whereby any attempt at crossing it is now near-fatal, has been raised. The defense has also raised questions of whether aid workers should simply stop at leaving supplies in the desert or can take in and care for those that have been fatally weakened by the arduous journey.

Supporters of Warren believe that the federal prosecution against humanitarian aid is to have nationwide implications for aid workers everywhere. Talking to CNN Warren’s father Mark Warren said, “I do think they’re making an example of him… He’s the means by which they mean to send a message.” “It’s a difficult, frightening, profound moment for humanitarian workers,” said Peg Bowden, an aid worker with the Green Valley/Sahuarita Samaritans, among Warren’s supporters to be present in the trial, told CNN.

No to criminalization of anti-racist movement in US
RECENT ARTICLES