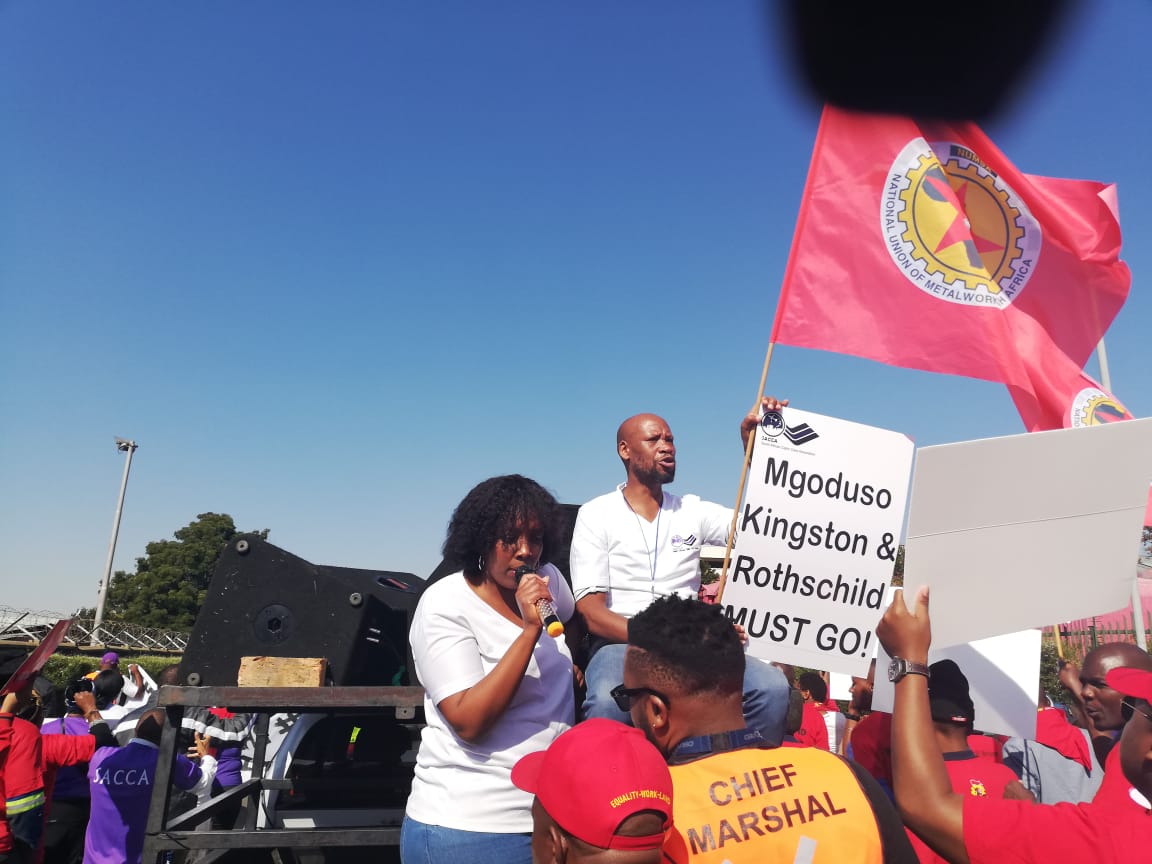 On June 11, the two unions had mobilized its members working for the airlines to picket outside all the major international airports. For them, if privatization of the enterprise goes forward, it would cause many workers would lose their jobs and airfares would sky rocket.

We are warning the management of SAA that this picket is a taste of things to come. We demand that they respond to our demands or else as SACCA and NUMSA we will shut down the airline!#SAAPICKET#SAVESAA#SAVEOURSOES

Following the mobilization, the two unions jointly delivered a memorandum stating the demands. They gave one week for the resignation of the three board members and demanded that Jarana be reinstated in 48 hours.

Later, the board met with the unions and asked for a week’s time to deliberate on the demands, which was granted. Though, the unions have said that in the meantime they will be mobilizing for a “mother of all strikes” should the government fail to meet the demands.

“Key among our demands is that President Cyril Ramaphosa must intervene and engage his ministers. Our position is that Vuyani Jarana must be brought back to execute the current turnaround strategy,” reads a joint statement issued by the two unions yesterday.

Jarana, who was appointed as the CEO in 2017, tasked with addressing the financial distress of the airlines, had resigned on June 2, stating as his reason the lack of support from the government in his effort to stabilize the company’s finances.

His turnaround strategy, which the government had approved, would have made the airline financially self-sustainable by 2021, provided the government gave the financial support it had committed to.

However, the government, he lamented in his resignation letter, not only failed to provide the support it had promised, but even came in the way of his initiatives to raise the finances from other private sources. Jarana, had worked closely with the unions, to whom he had assured that he will not let SAA be privatized.

According to the unions, three board members – Thandeka Mgoduso, Martin Kingston and Peter Tshisevhe – have “sabotaged” Jarana’s strategy, because a recovery of its financial health would defeat their privatization agenda.

Martin Kingston is a former CEO of the Rotchsild and co. “Last year, during the Eskom wage negotiations, NUMSA stumbled across a letter which was written by the very same Martin Kingston…[in which he advised] Eskom GCEO on how the Rothschild’s should be appointed to advise and consult on how privatizing Eskom could be achieved,” the joint statement read.

“In essence,” the statement continues, “the Rothschilds were writing a specification on how they should be appointed, in a clandestine fashion, in order to privatize Eskom.” The unions believe that Kingston, works for the interests of the Rothschild family and has the same agenda with regards to SAA. They believe that Peter Tshisevhe is aiding Kingston.

With regard to Thandeka Mgoduso, they maintain that she has been interfering in the daily operations of the airline and does not have an interest in the profitability of SAA. They cite that “Her goal is to ensure that it is sold off piece by piece to cronies of the ANC elite, which in this case are the Rothschild’s.”

Overall they state, “these three constitute a permanent “weak link” within SAA, whose mission and task is to further the aims for wholesale privatization. The Minister of Finance, Tito Mboweni acted recklessly as demonstrated when he publicly said that if it was his money, he would not put a cent in the SAA turnaround strategy. Quite frankly, such statements constitute nothing less than to sabotage the genuine effort and contribution that Vuyani Jarana put together to turnaround our SOE.”

Should this sabotage succeed, the unions warn, “If after exhausting all avenues of persuading government to support the current turnaround strategy and to bring Jarana back, as unions, we will be left with no option but to embark on an indefinite strike action until our demands are met, and the result will unfortunately ground our national airline.”

Though the unions agreed to give the board one week to deliberate, they warn that the board should not take them for granted, “Whilst they deliberate, we will continue to mobilize on the ground in preparation for the possibility of the mother of all strikes in aviation if this board continues to ignore the demand to take the necessary steps to #SaveSAA.”