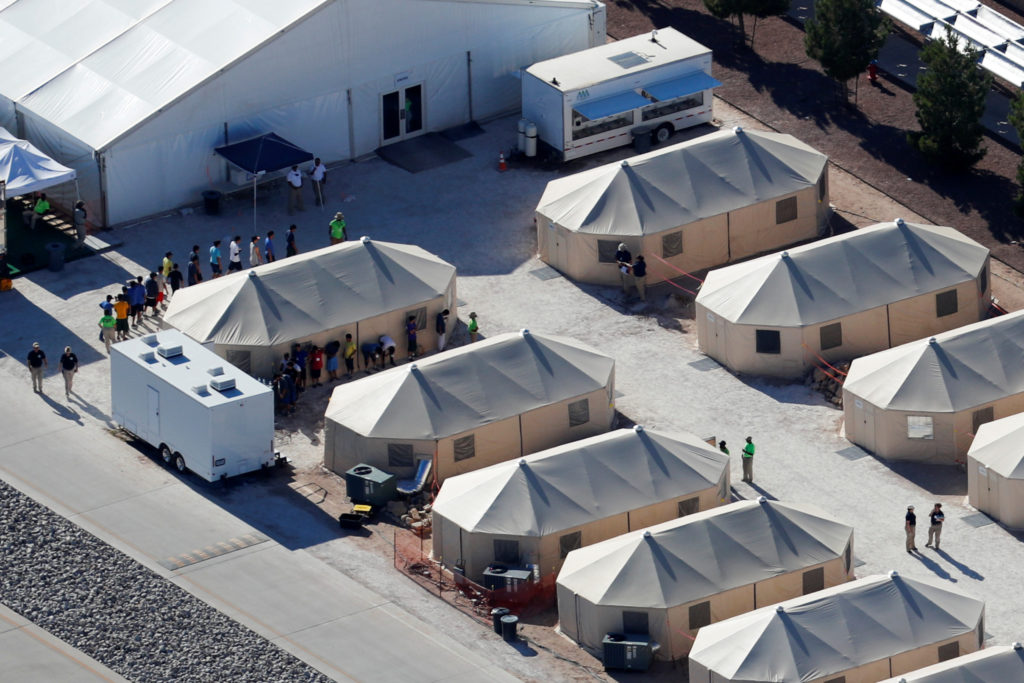 Immigrant children now housed in a tent encampment under the new "zero tolerance" policy by the Trump administration are shown walking in single file at the facility near the Mexican border in Tornillo, Texas, U.S. June 19, 2018. Photo: REUTERS/Mike Blake

On June 26 a photo of Oscar Martinez and his two year-old daughter Valeria drowned in the Rio Grande river on the US-Mexico border circulated on different media platforms. The wife and mother who survived told the media later that the family had left El Salvador in April to seek asylum in the United States.

The family had been held in a migrant camp in Mexico after a long and dangerous journey without food and in an oppressive heat. In order to escape the camp life, the family decided to take a different path to cross the border, by way of the river, when this tragedy happened. 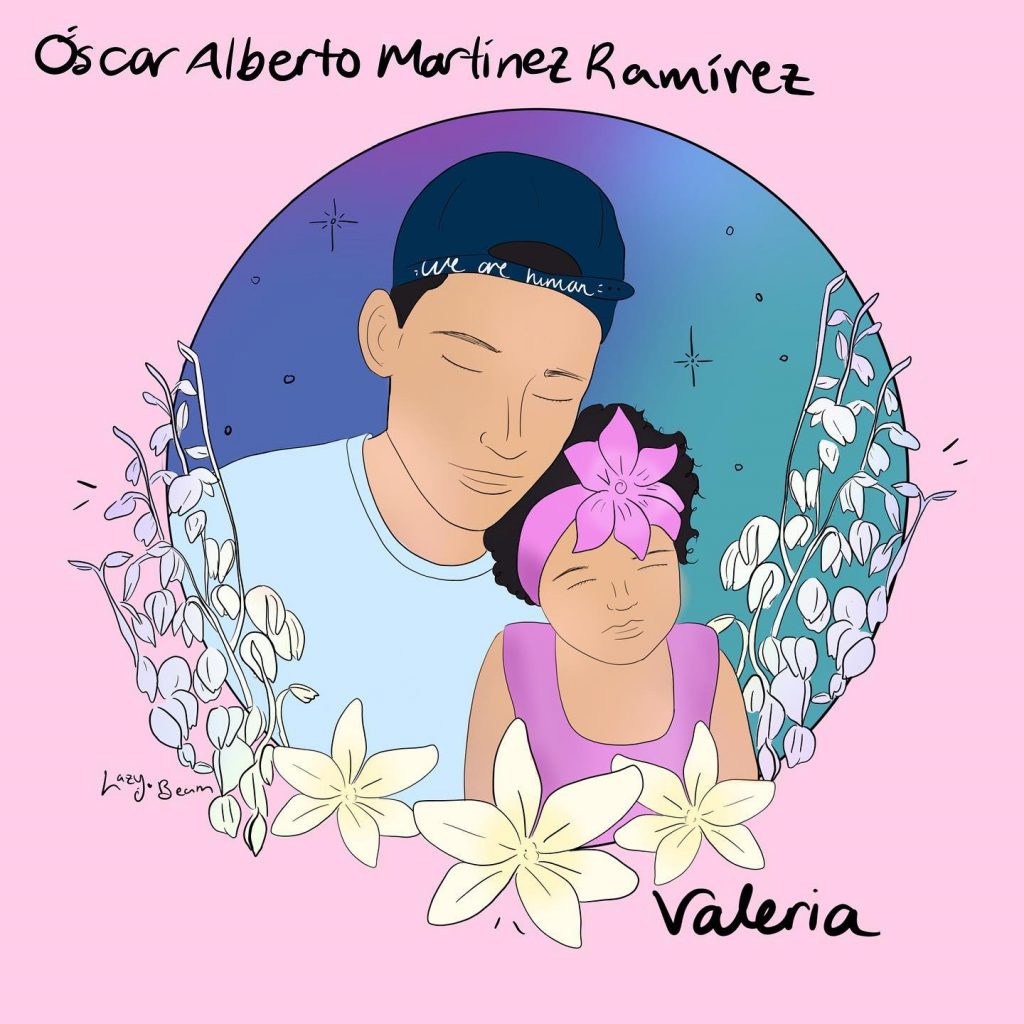 Such deaths have become regular. The strict border control policies part of the Trump administration’s so called “zero tolerance” policy on migration is the immediate cause of such deaths. Since coming to office, Trump has enacted a serious of hard-line policies to deal with the arrival of migrants to the US and another set related to people already living in the US. His tough policies are part of a global trend which seek to punish migrants for the social and economic problems created by the capitalist crisis.

The majority of migrants arriving to the US’ southern border attempt to apply for asylum which can be done in two different ways. They can present themselves at the port of entry and file application or they can cross the border ‘illegally’ and turn themselves to the authorities or Border Police. In both the cases, migrants are arrested and kept in detention centers for the period of processing of their application. As per the 1980 Refugee Act and Immigration Act of 1991 asylum is a right of people. People are leaving their countries of origin to avoid a lot of socio-economic conditions, primarily a result of imperialist policies followed by the US in the region. However, today, many migrants moving to the US seek asylum primarily citing violence in their own countries.

Since asylum is a right, no one can be turned away from the border without a proper process. The most common form of immigration control used by US authorities is ‘Metering’, which restricts the number of immigrants allowed each day to enter the US border legally. This mechanism was first adopted during the Obama administration and is now used extensively by the Trump administration.

Under Trump, several policies have been adopted in order to discourage people from attempting to migrate to the US. The policy of “family separation” at the detention centers in which children are separated from their parents and kept separately from each other is one of these notorious mechanisms. The twisted logic is that the cruelty of family separation is meant to be a strong enough deterrent to stop people from migrating.

In both child and adult detention centers, often the most basic amenities such as food, water, health care and sanitation are lacking. In many detention centers there is no protection to safeguard detainees from the oppressive weather conditions. Six children, all from the Central American countries, have died in such detention centers due to the lack of proper health care. There are currently around 2,000 kids in the US Customs and Border Protection Agency (CBP) custody.

Since waiting period has been extended from days to weeks to months the camps are often overcrowded and the bad weather makes the condition ever worse. People are sometimes forced to sleep on the streets.

While migrants are arriving to the US from a diversity of countries seeking jobs and better living conditions, an overwhelming majority are from Central America. Though there are no clear figures available, according to the most cited estimates, the total number of migrants to the US from the region is expected to cross 700,000 by the end of September this year.

The social, economic and political crisis in Central America is the driving factor behind the migration. Rates of unemployment and violence have skyrocketed, there is a growing lack of accessibility to basic services like health and education, an increase in militarization and territorial control by criminal groups as well as rampant and unchecked corruption. This situation is caused by a unique partnership between the local oligarchies and the US government. The imperialist ambitions of the US to control resources and politics in the region has led to consecutive US administrations to extend their wholehearted political, military and economic support to the ruling classes whose oppressive policies safeguard US interests.

In the recent times the people in Central America are also suffering the effects of the twin disaster of free trade and climate change which have destroyed local agriculture and dried up other sources of livelihood.

Lately, the partnership has been strengthened as the US has joined hands, sometimes forcibly, with these governments to take a tough stand on immigration. On June 7 the US pressurized the newly elected Mexican government of Andrés Manuel López Obrador to sign a deal on immigration. Under the deal Mexico has agreed to the deployment of 6,000 additional National Guards across the country with a priority to its southern border with “northern triangle” countries El Salvador, Guatemala and Honduras. Mexico agreed to take additional steps to check the human smuggling network, a euphemism for movement of migrants. According to the deal, the US will send the detainees at the border back to Mexico. They will stay in Mexico while their applications are processed in the US.

Guatemala also signed a “safe third country” deal. This means all the people who want to apply for asylum in the US have to apply in Guatemala and live there till their applications are processed.

On June 24 and 25 thousands of protesters across the US took the streets to protest Donald Trump’s announced policy measure according to which millions of “undocumented immigrants and asylum seekers” will be deported back to their countries of origin through US immigration and Customs Enforcement (ICE). The protesters came from different immigrant advocacy organizations, left groups and trade unions. There was also presence of workers from Wayfair who have been protesting the company that was recently exposed for supplying furniture to detention centers.

Human rights and immigration rights activists have also blamed tech companies such as Palantir Technologies and Amazon Web Services for helping the Trump administration to get crucial information and data in executing its regressive policies on migration.

After the protests Trump tweeted that he is ready to delay his planned forced deportation for two weeks. According to some observers this policy, has caused panic and fear among the millions of migrants who have been living in the US for decades.

Amid the protests against Trump’s announcement and reported complaints about the deteriorating conditions of the detention centers, the US House of Representatives passed a bill to sanction $4.5 billion to emergency border aid on June 25. The bill attempted to restrict the flow of money towards immigration enforcement and the Department of Homeland security and instead focuses on meeting basic humanitarian conditions in the centers.

The Republican party and its leader President Trump were critical of the bill. In an interview with Fox News on Wednesday Trump said, “I’m not happy with it because there’s no money for protection. It’s like we’re running hospitals over there.”

On June 26, the Republican controlled Senate, passed a fresh emergency aid bill which provides $4.6 billion without the same restrictions set by the House. Due to pressure, the House was forced to pass the Senate’s bill in order to release the aid to the centers.

Though, since the approval of the emergency aid, the Trump administration has not given any assurances. The reports of deteriorating condition of detainees in the camps continues. According to one such report, at a detention center in Clint in Texas hundreds (more than 350) of children have been held for weeks without proper food and sanitation.

A day before the Senate bill was passed, John Sanders who was the acting head of U.S. Customs and Border Protection (CBP), resigned. Many speculated that the growing crisis related to the inhumane conditions in the detention centers was the reason for him stepping down. Though, the CBP has yet to admit that conditions are dire.

The Trump administration, in addition to ordering ICE raids and deportations, has been attempting to attack the legal framework that currently protects undocumented migrants in the country.

The Deferred Action for Childhood Arrivals (DACA) passed in 2012 currently protects hundreds of thousands who were brought to the US as children by their parents and overstayed their visas. DACA has been a centerpiece of Trump’s crackdown on undocumented immigrants in the country and in 2017 he ordered that it be ended. While legislators were unable to save it, federal courts in several states including Virginia, California, Washington and New York blocked Trump from ending it. This past Friday, the Supreme Court announced that it will make a decision on whether Donald Trump can in fact terminate the program.

Meanwhile, though his termination has not been successful yet, the Trump administration has tempered with the process for exemptions accorded in the policy. Records of criminal or economic offenses are used to deny exemptions and extensions to persons protected under the DACA. Once denied, people who have spent their life time in the US, are deported back to their country of origin.

In a speech last month, Trump reiterated his administration’s preference for skilled immigration. He believes that most of the current policies are against merit and encourage low skilled people. His proposal is to supposedly increase the percentage of applicants accepted on the basis of merit from 12% to 57%.

This announcement is unsurprising given the nature of the current crisis of capitalism. Migrants who for decades provided cheap labor and kept the profit rates high for the US businesses are no longer welcome. The changing nature of the production has released a large number of people from their jobs. New jobs are few and require high skilled professionals.

Therefore, while past US governments adopted a slightly more lenient view about the number of people who can apply for asylum, the Trump administration seeks to control and limit this number. This policy change on migration, which started with the Obama administration, is a reflection of the failures of the policies adopted under Washington consensus. The US is still struggling to recover from the economic crisis of 2008. The country which has been the champion of globalization, of free trade and movement of people is now using the worst forms of protectionism. The centralization of wealth, joblessness, stagnation of real wages and growing poverty in the US are the most glaring contradictions of the capitalist crisis in one of the wealthiest countries in the world.

Trump’s rhetoric against the migrants resounds the xenophobia and white supremacist beliefs prevalent among a substantial section of American population. These ultra nationalist conservative sections that claim that migrants are a threat to social fabric and economic interest of the US, refuse to acknowledge their own history. This strain of right-wing nationalism has been rising across the world and mobilizing millions, but sooner or later it will become clear that Trump and all the other strong men’s xenophobic policies will never solve the crisis of capitalism.

In times of COVID-19, US escalates threats against Venezuela 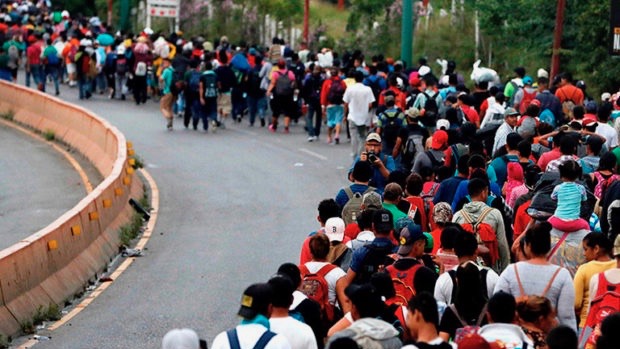