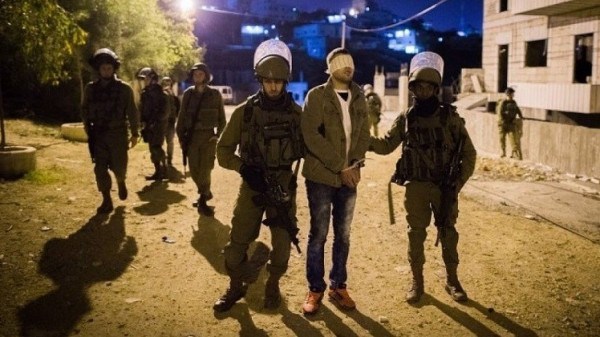 Birzeit students were the targets of the latest early morning raids carried out by Israeli forces on July 2.

Israeli security forces arrested thirty-four Palestinians in raids at dawn on Tuesday June 2 in the occupied West Bank and East Jerusalem. Seven of those targeted are students and several of them are current members of the student council of Birzeit University. Twenty-two of those arrested are from the West Bank and twelve are from East Jerusalem.

Sources said many of those arrested were active with Hamas’ student movement, the Islamic Bloc, in Birzeit university. The laptops and mobile phones of the students were also confiscated by the Israeli forces.

In the town of Beituniya, the coordinator of the Islamic bloc, Mu’taz Abed, and the secretary of the public relations committee in the student council, Bara Asi, were arrested. Israeli troops also broke into the homes of former head of the student council, Osama al-Fakhouri, and students Amir Adnan and Izz al-Din Hassouna.

The secretary of the finance committee of the student council, Mohammad Nakhla, and another student, Bilal Hamid, were arrested after the Israelis broke into the Jalazoun camp. There were also reports of violent repression of Palestinian civilians in Qalqiliya and al-Khalil where Israeli forces fired stun grenades and tear gas canisters.

On Monday evening, Israeli forces arrested 10 Palestinians from Jerusalem while they were leaving the town of Issawiya and then later arrested two more Palestinians from inside the town. Residents of the region said Israeli forces, who had stormed into their villages late at night, fired rubber-coated metal bullets, stun grenades and tear gas canisters at young men who protested these atrocities. The protesters responded by throwing stones and empty glass bottles.