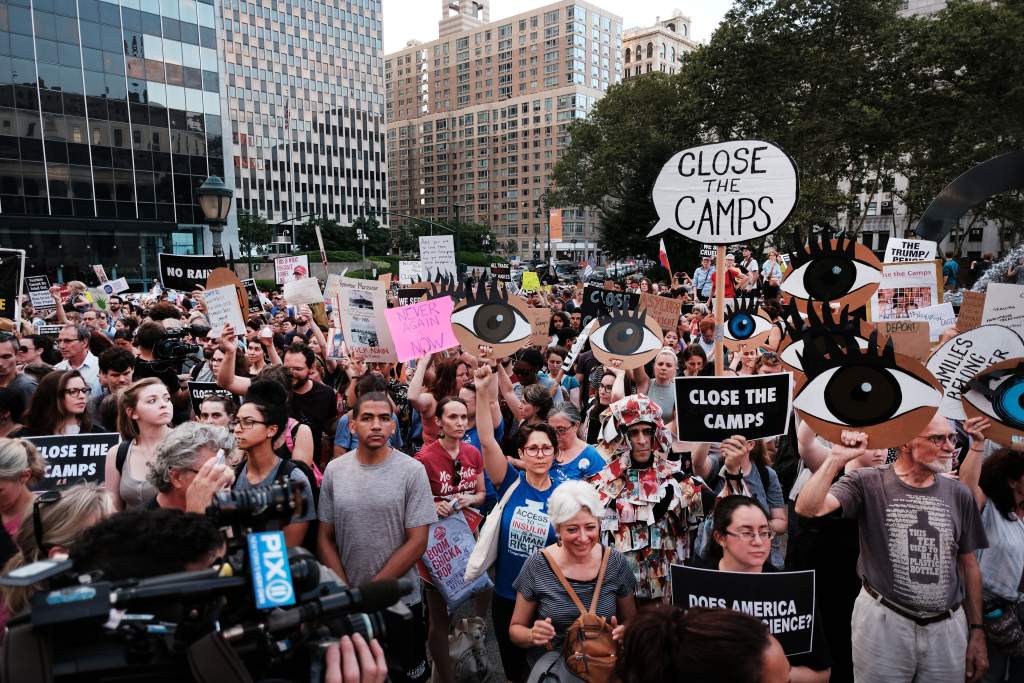 Thousands gathered in cities across the country on July 12 to protest the detention of immigrants in the US. Photo: Getty

Yesterday the raids threatened by Donald Trump to deport ‘millions’ were set to begin and will supposedly continue until Wednesday. Until now, widespread raids have not been reported but the looming threat has shaken migrant communities across the country.

All US presidents since Bill Clinton, who authorized compulsory detention of asylum seekers and undocumented migrants crossing the border in 1996, have taken punitive measures against immigrants. George W. Bush founded both the Customs and Border Protection as well as the Immigration Customs Enforcement Agency (ICE) in 2003 and also pioneered the first “zero tolerance policy”. Later, Barack Obama’s administration managed to give a humane face to the biggest ever deportation drive of any US administration in history. It deported close to 3 million people, including several asylum seekers, and even separated those who had family members who are US citizens.

While there are very few differences between the policies adopted by administrations preceding Trump’s hard-line policies to supposedly “combat” immigration, there are certain things that make the current policies stand apart. Although deportation-wise Trump is still far behind compared to his predecessors, his government currently maintains an extensive network of detention and imprisonment centers, nearly 1,500 facilities with horrid conditions, for immigrant families to the profit of the prison-industrial complex. Here is a comprehensive look at it.

Deserts, swamps and prison cells, you don’t know what kills you

Over two weeks ago, the international media was awash with the picture of a Salvadoran father and child dead by drowning after their fatal attempt at crossing the Rio Grande river to enter Texas. The picture highlighted the routine deaths of asylum seekers fleeing violence and crushing poverty from central America and certain parts of Texas, braving the extreme conditions at the US-Mexico border.

According to the US Customs and Border Protection (CBP), over 7,216 migrants have died trying to cross the border between 1998 and 2017. According to reports by the CBP, during the eight years of Obama administration, migrant death numbered anywhere between 200 to 300 at any given year, sometimes even higher than 300. These figures remained more or less the same, with some reductions, under Trump but with the only difference that the proportion of those dying under custody, especially minors, have increased alarmingly.

Since the mid-90s several humanitarian groups have come up in border towns across the southern United States, trying to provide supplies like bottles of water and food for those crossing the border. They have been targets of generalized hounding by the US Border Patrol, who act with a generalized policy of destroying these supplies that are left behind by the activists in the deserts.

Recently, the government has also started prosecuting aid workers for helping migrants. The case of Scott Warren of the Tucson-based organization No More Deaths, who is currently facing a retrial over charges of transporting and harboring undocumented migrants, caught national attention. The case ended in a mistrial a month ago and is being retried by federal prosecutors. Warren was prosecuted for giving shelter to two dehydrated and weakened asylum seekers in a building near the desert that is used as a staging point for humanitarian work by his organization. In case of a conclusive judgement, it would determine the limits and scope of humanitarian work within the US, and more importantly, whether people have the right to undertake humanitarian aid at all in their capacity.

In the past few months, several child deaths have been reported across various detention facilities in the US. The Trump administration’s policy of separating refugee children from their families, as a supposed deterrent to prevent migrants and asylum seekers from crossing border, has been roundly condemned.

Earlier, the Office of Refugee Resettlement (ORR) under the Department of Health and Human Services (HHS) that handled cases of thousands of underage and unaccompanied asylum seekers, was made to take up detention of those who were deliberately separated from their families. Because most of these children were sent to the ORR, the proper records of the adults that had accompanied them were often not kept, making it next to impossible for the families to trace their children.

Earlier this year, the government gave a figure of 2,737 separated children, most of whom had proper documentation that made it relatively easier to trace them back to their families. The government later conceded to the possibility that thousands more could have been separated, but a number is difficult to arrive at because of a lack of paper trail. Nevertheless, the number of children detained under the ORR increased a staggering six-fold from around 2,400 in May 2017 to nearly 13,000 by the end of 2018. Although the number of detained adults under the ICE and CBP increased exponentially, the rate was nowhere close to that of detained children under the ORR.

The conditions under which most children are detained are not merely subpar but often resembling cattle pens. A recent visit by a group of lawyers inside a border detention facility in Clint, Texas, found that the facility was overcrowded, with children lacking access to families, beds, medical attention, and even basic facilities like regular baths, drinking water or clean clothes. The permanent facility held 350 minors in what the visiting attorneys said were “inhumane” conditions.

One of the attorneys, Elora Mukherjee, who was also the director of Columbia School of Law, approached the media because of the squalor she saw in the facility. The attorneys had visited the Clint facility for an ongoing litigation over the violation of Flores Agreement, that stipulates that migrant children can not be held in detention for more than 72 hours.

Most of the children in similar detention centers across the southern US border region were detained for more than the 72-hour limit, and this included toddlers in overcrowded cells and tents without any adult supervision.

But along with the terrible treatment by the guards, these children also have to endure sexual harassment on a massive scale. In February, a set of documents were released by Florida Congressman Ted Deutch, revealing thousands of sexual abuse cases of detained migrant children.

Between 2014 and 2018, over 4,500 cases and over 1,300 cases of sexual abuse against unaccompanied detained migrant children were filed with the ORR and the Department of Justice, respectively. A large number of these cases came from detention centers that were contracted out to private parties.

The NBC News obtained reports from various government case handlers of harrowing details of sexual abuse and retaliatory action by detention authorities. According to the dozens of accounts in Arizona, on top of routine molestation of teenagers, the camp officers would also retaliate against those who complained about unsanitary conditions that they are put into.

Deaths in custody a new reality

The reports mentioned above contextualize the eight reported deaths of refugee and migrant children while under custody or shortly after being released. Mukherjee noted that no such death happened in the 10 years preceding the Trump administration. All of these children that died in custody survived harsh journeys of more than a thousand kilometers, mostly on foot, with their families, but died in some of the most well-funded prisons in the world.

The same goes for adults as well. Overall, 24 migrants died while under detention by the ICE and 4 others died shortly after their release. A large number of these deaths happened in the months after September 2018 when Trump administration amped up the immigration control on a war footing.

But questions have been raised over the actual number of deaths inside the detention centers. It has to be noted that the ORR, CBP and ICE, the three federal agencies that detain thousands of migrants, have repeatedly tried to cover up the deaths. For instance, the sixth reported death of a child in custody was revealed 8 months later, after the CBS News revealed the death of a 10-year old Salvadoran girl in custody that was covered up by authorities for months.

The worst part of all of this is the massive profits raked in by the nation’s prison industrial complex. According to a 2018 report by the National Immigrant Justice Center, as of November 2017, a staggering 71% of the ICE detainees were held in privately-run facilities. This share has increased over time as new contracts have been signed with private companies but no new government-run facilities have come up in the past year or so, that get sanctioned by federal agencies even with histories of flouting local and federal regulations. For instance, the three recently acquired ICE detention centers in Mississippi and Louisiana, reported Mother Jones, were all private facilities with at least one with a prior history of being a prison with inmate deaths and a riot.

In yet another damning report by NBC News, the federal government in 2018 spent approximately USD 775 per day per child to detain unaccompanied migrant children. The amount is more than the cost of an average luxury suite in a major metropolitan city. Despite the enormous funding, these centers function as if they are without supplies or funds to begin with. This was done during Trump’s family separation policy despite the fact that keeping families together would have cost the government around a third on an entire family in a government-run facility.

In the financial year 2018, the ICE had reportedly overspent its Congress allocated budget, having reported an expenditure of USD 807 million for private detention centers. The two biggest contractors to the detention facilities are GEO Group and CivicCore. The two together own most of the facilities and also happen to have extensively funded the Trump presidential campaign.

The GEO Group was the first private company to land a contract with the ICE under Trump administration, to the tune of USD 110 million for detention services. CivicCore still holds a renegotiated four-year contract for the same, that began during the Obama administration, and is worth close to USD 1 billion. Others in the racket of immigration control include tech services from Thomson Reuters and Microsoft, worth USD 6.8 million and USD 19.4 million, as well as medical and officer training services from Johns Hopkins University School of Medicine, worth USD 11.4 million. The organization Mijente has also uncovered massive contracts with tech giants Amazon and Palantir.

Moreover, an estimate from 2017 put the total expenditure by the ICE alone at over USD 1.7 billion on over 5,000 contractors for services ranging from detention centers to the supplies that go into maintaining them, including the programs and technology that handle the database of those detained. Even though no clear concise data is made available to the public on how much it costs to detain and deport asylum seekers and refugees, except for few snippets of data that are revealed through anonymous sources or scrutiny from the Congress, the budgetary allocations are revealing enough.

The ICE has been allocated USD 7.6 billion for the financial year 2019, a steep jump from USD 6.2 billion that it was allocated in the previous two budgets. Even though the CBP did not see a similar jump in its allocations, it still receives close USD 15 billion in budgetary allocation from the federal government. Between the two, we are looking at an annual budgetary expenditure of more than USD 22.4 billion. A large part of this is spent on overpriced private contracts, and if one were to go by the overspending by the ICE to pay for private prisons in the previous financial year, there is a great likelihood that it will not stay within the budgetary limits.