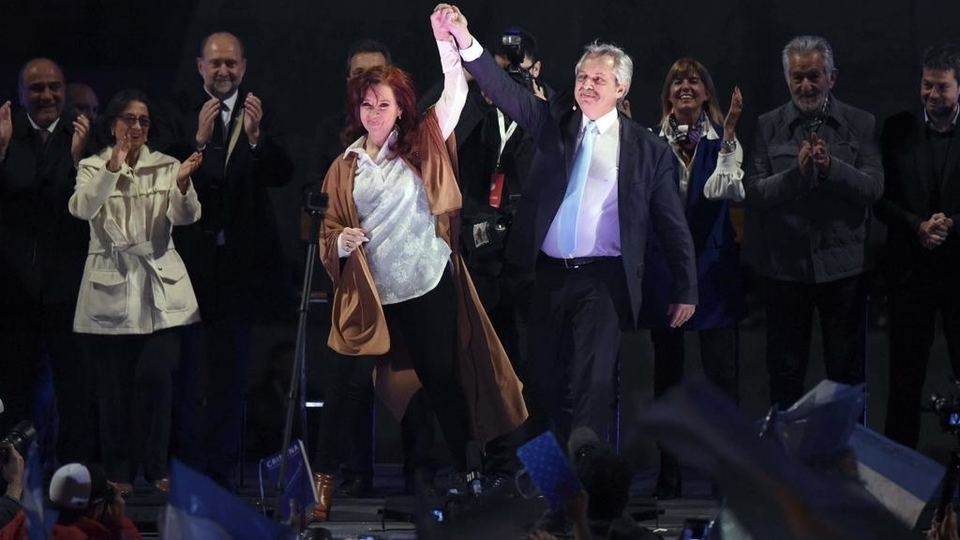 Cristina Fernández de Kirchner and Alberto Fernández celebrate their victory in the primary elections in Argentina.

The primary elections, also known as the primary, open, simultaneous and mandatory (PASO), were held in Argentina on August 11. Alberto Fernández of the Frente de Todos -a coalition of the center-left parties- emerged as the winner of the election with 47.22% of the votes, defeating the current right-wing president Mauricio Macri with a margin of 15%. Macri of the Juntos por el Cambio (formerly known as Cambiemos) secured the second place with 32.36% of the votes.

Following the top two candidates were Roberto Lavagna, the independent candidate, with 8.39%; Nicolás del Caño of the Workers’ Left Front (FIT) with 2.88%; Ricardo Gómez Centurión of the Frente Nos with 2.62%, and José Luis of the Frente Despertar with 2.21%.

After the results were announced, Fernández thanked and addressed the crowd gathered around his campaign bunker. “We did not come to restore a regime, but to create a new Argentina, that takes into account the best experiences, that ends with this time of lies and that gives Argentines a better horizon for the future. I am sure that today we, the Argentines begin to build another history and I want to thank everyone who gave us the vote, the commitment of their trust,” he said in his victory speech in Buenos Aires. Former President Cristina Fernández de Kirchner is Fernández’s running mate and vice-presidential candidate.

The victory in the province of Buenos Aires was also remarkable and significant. Axel Kicillof of the Frente de Todos obtained 49% of votes, while the current governor, María Eugenia Vidal of Cambiemos, was in second place with 32%. With nearly 12.5 million voters, the district is important as it represents almost 37% of the total electoral roll.

The leaders of several social movements and organizations as well as trade unions celebrated the success of the Fernández ticket. “Today we had a victory that is a turning point in the struggle of our patria grande (great homeland) for its liberation in the face of the outrageous intervention of all the imperialist powers. Our people are an example of conscience. The Latin American working class is an example of this persistent struggle. We are sure that the freedom of Lula, the freedom of all our America has come closer with this victory,” said Juan Grabois, leader of the left political platform Frente Patria Grande.

33 million Argentines were called to vote this Sunday. The primary elections serve as a great national survey, without any margin of error, in order to define the campaign strategies for the final elections.

Since the beginning of this year, Argentines have been continuously mobilizing against Macri’s neoliberal economic policies. His electoral promises of change and progress, zero-poverty, reducing inflation and providing better employment opportunities have fallen apart. His administration’s policies have created an unstable and vulnerable economy. The social and economic condition of the country is deteriorating; the value of the Argentine peso is falling; Argentina is experiencing one of the worst recessions in its history; employment, poverty, homelessness, food insecurity, 55% inflation have pushed the majority of the Argentine working class to the extent where they are everyday struggling to make ends meet. With the result of these elections, Argentines have made it clear that they choose to return to the progressive governments instead of the neoliberal misery of Macri.

The general elections are scheduled for October 27 in Argentina. In order to directly win the presidency in October, a candidate needs at least 45% of the votes or 40% and a difference of 10% over the second-place runner. This implies that if the results of these primary elections are repeated in the general elections, Fernández will be the new president of Argentina without going to a second round. And in case there’s no clear winner, voters will return for a run-off on November 24.