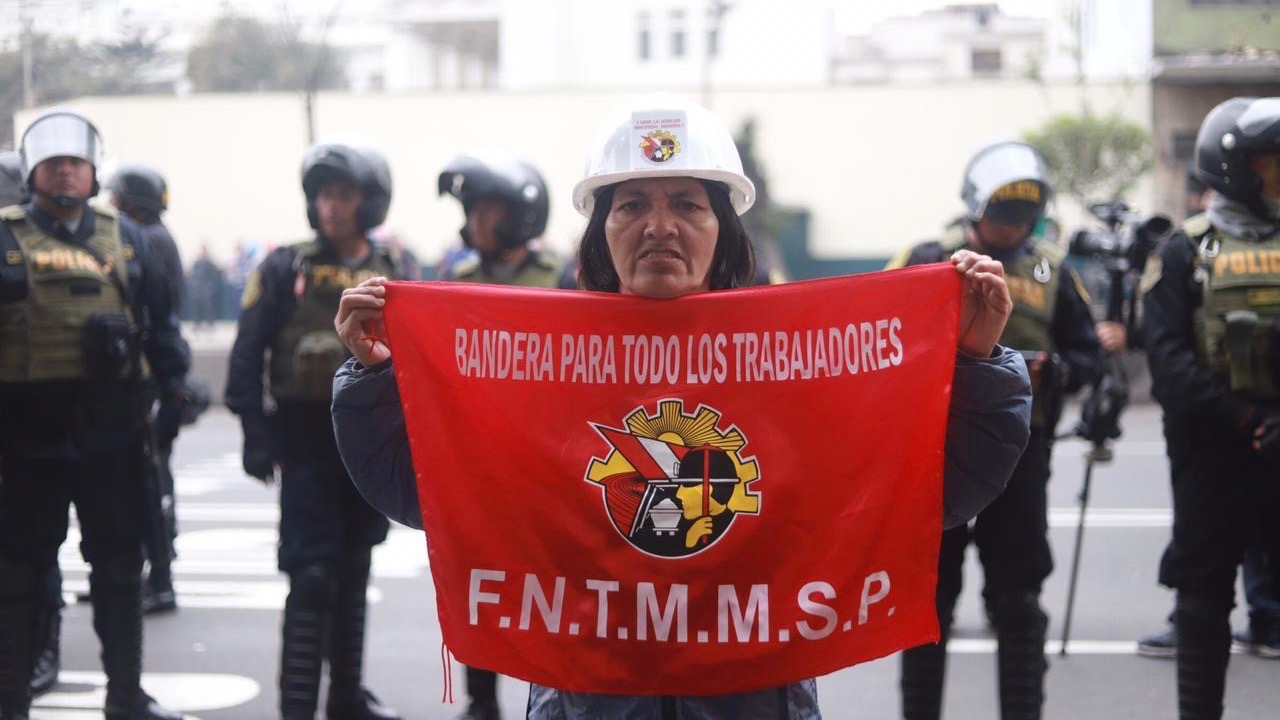 A participant of the national mine workers strike holds up a flag of National Federation of Miners, Metal and Steel Workers of Peru. Photo: Twitter

On September 10, the Peruvian mining industry workers began an indefinite general strike to demand the right to collective negotiation, an increase in salaries and better working conditions. In the capital, Lima, hundreds of mine workers marched from different parts of the city to the Plaza San Martín, where they were addressed by various union leaders. According to reports, on September 11, the second day of the strike, mine workers in Lima were attacked by the police who threw tear gas canisters at them and confiscated their banners.

The call for the strike was given by the National Federation of Miners, Metal and Steel Workers of Peru (FNTMMSP). It was called in response to the unwillingness of the employers and the administration of President Martín Vizcarra to sit and dialogue with the workers about their demands. The federation called on the workers from all its 102 associated mine workers unions to take part in the strike and join the mobilization in the capital and at points across the country.

For the past five months, the federation has been demanding to meet with the National Mining, Petroleum and Energy Society (SNMPE) through the Ministry of Labour and Promotion of Work (MTPE) to demand a similar negotiation agreement reached with the construction sector for the mining sector.

“All we ask for is a fair, equal and dignified agreement for mining industry workers,” said the federation in a letter sent last month to president Vizcarra, requesting that he engage in dialogue.

The strike was also called to reject the anti-labor reform promoted by the government through the National Policy of Competitiveness and Productivity (PNCP) or decree no. 345-2018-EF, approved by the president in the month of July. Trade unions across Peru believe that it represents a set-back to labor rights and only favors business owners. They deem it an exploitative and slavish reform as it seeks to implement a series of regressive measures such as reducing the number of paid leaves, reduction of the Compensation for Time of Service (CTS), taking away retirement benefit, collective dismissals without compensation and temporary and contractual jobs without stability. It also takes away the right to wage bargain and strike as well as the right to prosecute the company for dismissing a worker on an invalid reason.

The mining sector is one of the most important sectors in Peru. Peru is the world’s third largest producer of copper, silver, zinc and tin, and the seventh largest producer of gold. The mining industry is the principal economic motor. Every year, the country’s economy makes millions of dollars from its mineral commodities.

Jorge Juárez, the general secretary of the FNTMMSP, reported that the mining companies have increased their revenue by up to 50%, with profits that reach 160% per year and an overall amount of 29 billion Sols a year (about 7 billion dollars). “Meanwhile, the workers only receive a 2% annual pay increase,” he said.