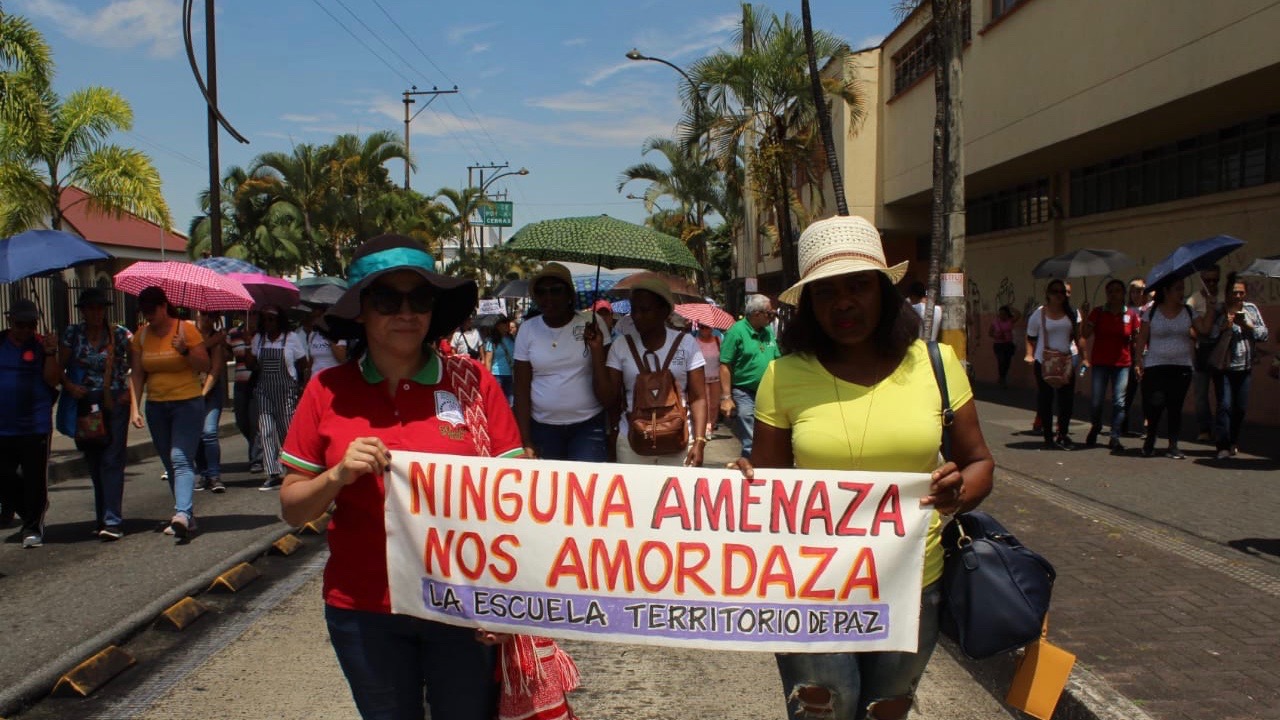 No threat can silence us. The school is territory of peace. Photo: Fecode

On September 12, teachers across Colombia took part in a 24-hour national teachers strike and mobilized throughout the country, with the slogan “For life, peace, democracy and school a peaceful territory”. The call for the strike was given by the Colombian Federation of Education Workers (FECODE), in the aftermath of the death threats to the Executive Committee of the federation by the far-right paramilitary group Aguilas Negras (Black Eagles).

Five large-scale mobilizations were carried out in Bogotá, Barranquilla, Bucaramanga, Cali and Medellín to reject all forms of violence against education workers, which were joined by teachers from neighboring departments. In Bogotá, the protesters marched in large numbers to the Plaza de Bolívar from three different points of the city. Demonstrations, rallies and assemblies were also held in the departments of Meta, Boyacá, Vaupés, Nariño, Risaralda, Santander, Bolívar, Valle del Cauca, Antioquia, Vichada, Cauca and Córdoba.

The strike was called to reject the threats against the members of the executive committee of FECODE and its affiliated unions as well as demand guarantees for lives and physical well-being of the teachers, social and trade union leaders. Under the current right-wing government of President Iván Duque, so far, 10 teachers have been killed and nearly 700 have received death threats. In addition, at least 226 social, peasant and Indigenous leaders have been assassinated so far in 2019.

The teachers also ratified their support to the peace process and respect for the Special Jurisdiction for Peace (JEP). Nelson Alarcon, the president of FECODE said that the organization rejects “all forms of violence wherever they come from.”

The mobilizations received the support from students, parents, social organizations and trade unions nationwide. Internationally, the teachers from Mexico, Argentina, Peru, Brazil and other countries that are members of the International Education (IE), extended their support and solidarity to the Colombian teachers.

The federation denounced that “on the night of September 2 and the morning of September 3, threatening messages and a pamphlet signed by the Aguilas Negras, in which they threatened the Executive Committee, arrived in the general secretariat’s email”.

As a result of these threats, the teachers suspended their “caravan for life, peace and democracy,” a peaceful rally which was scheduled to take place on September 6, 7 & 8 from the capital Bogotá to Cauca, one of the departments most affected by violence.

Last month, the FECODE called for a 48-hour national strike on August 28 & 29 to protest the violence against social and union leaders, including teachers. During the first day of the strike, thousands of teachers hit the streets of Bogotá and marched from the National Park to the Ministry of Education demanding security for teachers and leaders. The strike was called after the assassination of professor Orlando Gomez in Cauca department of Colombia.

The Aguilas Negras or Black Eagles is a far-right paramilitary group operating in Colombia since 2006. The group is involved in several illegal activities, such as extortion, robbery, kidnapping, illegal gold mining, land theft operations, and has alleged links to drug trafficking. It has been continuously targeting social and peasant leaders. According to experts, Aguilas Negras is a name used by far-right extremists in politics, private sector and security forces to impose terror.