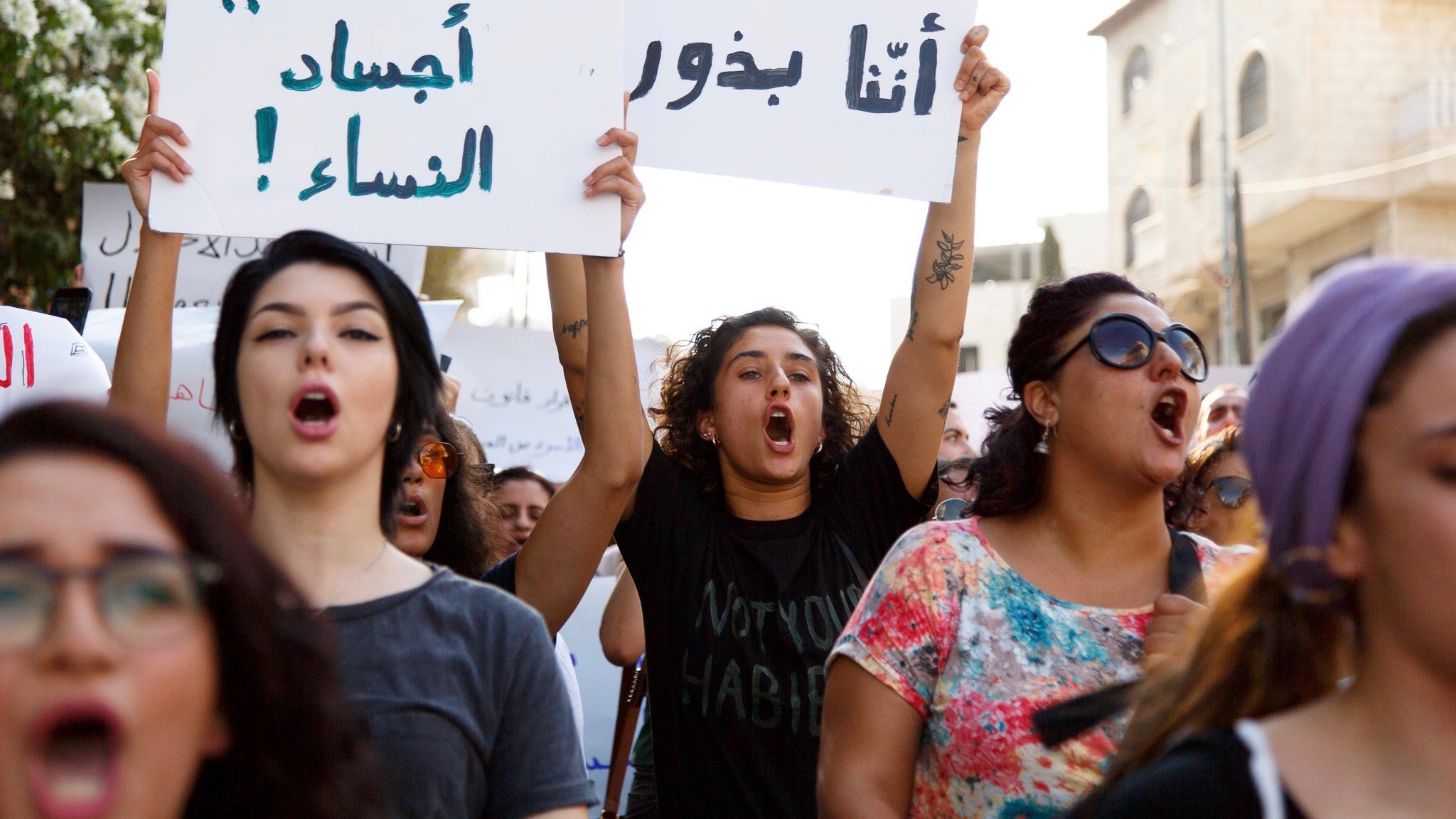 Palestinian women mobilized outside the prime minister's office in Ramallah after the killing of Israa Gharib to demand action be taken to stop violence against women. Photo: Twitter

On September 26, Palestinian women and communities across Historic Palestine and the diaspora will mobilize to reject gender-based violence and oppression, stressing the idea that the liberation of Palestine cannot be achieved without the liberation of women. The call for the mobilization was issued by Tal3at, a collective of Palestinian women across Historic Palestine who were moved to action following the brutal femicide of 21-year-old Israa Gharib who was murdered by members of her family in late August.

Tal3at (طالعات in Arabic), translated as “Going out into the streets”, seeks to break with the NGO-ization of the fight of Palestinian women and to re-center the struggle against patriarchy and patriarchal violence as an integral part of the political, economic and social struggle for the liberation of Palestine.

So far, mobilizations are planned to take place in the Palestinian cities of Haifa, Ramallah, Rafah in Gaza, Nazareth, Beirut, Al-Taybeh, Yaffa, Jerusalem, Arraba and Al-Jish, as well as in Beirut in Lebanon and Berlin in Germany.

Riya Alsanah, a Palestinian researcher and activist and a member of Tal3at collective, spoke to Peoples Dispatch about the women’s struggle in Palestine and what was the catalyst to organize the mobilization on the 26th.

Peoples Dispatch: How have women, feminists and anti-patriarchal activists been organizing in Palestine? What are the challenges?

Riya Alsanah: Palestinian woman have always been part of the struggle against Israel’s colonial rule. However, with the NGO-ization of the Palestinian struggle, we increasingly saw that women’s organizations sectionalized the struggle of women and framed it through a rights-based approach, rather than being part of a much bigger fight for social, economic and political change.

This process of NGO-ization framed our struggle as one solely against patriarchy, without taking into account our specific context of being a colonized people, living the adverse consequences of Israel’s over 7 decade-long settler-colonial regime. This has led some organizations in Palestine ’48 (Historic Palestine) to work with Israeli organizations, because for them, the central question is women’s oppression, which is something that is universally shared by all women.

For political parties and within the general discourse, the issue of women’s emancipation is treated as a secondary and an isolated matter and is not seen as a central element of our fight for justice for the Palestinian body politic as a whole.

Our group, Tal3at, which is organizing the actions on the 26th of September, came as a response to these narrow framings and to the heavy weight of the institutional response. We came to say that ordinary women can unite in action and solidarity and that the struggle for gender-based liberation and justice is intrinsically political and has to be integral to our struggle against the violence inflicted on us by the political and economic system we live under.

PD: How did the femicide of Israa Gharib ignite an urgency in the struggle of women in Palestine?

RA: The killing of Israa shook Palestinian society not because it was the first, but because of its brutality and how it exposed the multi-layered nature of institutional complicity. It showed how violence against women and their killing is not an individual matter but a broader social one in which institutions are deeply complicit. In fact, Israa is one of 28 Palestinian women who were killed in 2019. In 2018, 35 Palestinian women were murdered. These, of course, are the official statistics and we know that the real numbers would be even higher. So in a sense, we see that this is a widespread issue and it is an epidemic that is spreading throughout our society.

Israa was beaten nearly to death by family members who then followed her to the hospital to finish the crime. A widely circulated video that was taken at the hospital documents her screams and the fact that no one intervened in her defense. Following her murder, the family started spreading a number of theories about what happened to her and why. Their explanations were predictable and went along general tropes that are used in the defense of violence against women worldwide. They claimed that she was mentally ill and/or that she was possessed, as if even if these were true, that they would be legitimate reasons for murder. Then even her autopsy was a farce.

Israa’s case came at the point where people just felt that enough is enough, and that something had to be done.

PD: On September 26, there will be mobilizations across Historic Palestine. What is the central message of this mobilization?

RA: On the September 26, Palestinian women and communities across Historic Palestine and in Lebanon, and in the diaspora, will unite in action against violence against women in its varying forms – verbal, physical, psychological and political. We want to highlight that the violence women are subjected is not inflicted by an unknown monster, but often by a family member within the supposedly safe space of the home.

We want to say that this is not an isolated or an individual matter. It is part of a broader social and political issue that we have to confront and fight against collectively. We see our struggle for women’s emancipation and liberation as part and parcel of our broader struggle for liberation for an equal, just, and safe living for all. We want to centralize women’s struggles in our broader political struggle for liberation. These for us are interconnected and one cannot happen without the other. The act of taking to the streets and publicly calling out the system that we are fighting against is our first step in fighting against isolation and fragmentation and building a collective base that can strengthen us and unite us; and to fight for a better society and a community for women but also for all of its members.

The following was written by another member of the Tal3at (طالعات) collective as a reflection on the mobilization tomorrow:

We struggle to put an end to all kinds of physical, psychological, sexual and economic violence that women face on a daily basis.

We are struggling as Palestinians based on our understanding of our reality within a colonial system. As such, we are trying to create solidarity that breaks the geographic, social and political fragmentation imposed on us by this system.

We are also trying to restore our society to be a just and safe society for everyone as part of our struggle against colonialism.