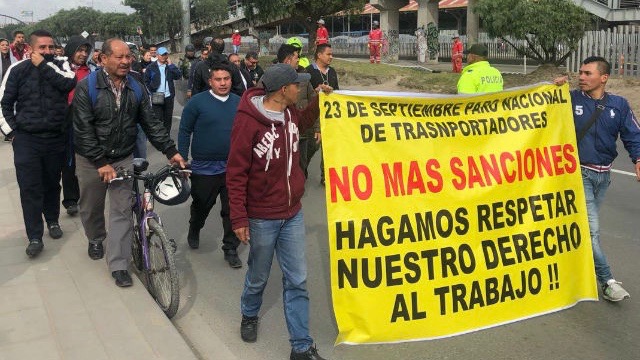 “No more suspensions. Respect our right to work”. Photo: RED+

On September 23, Colombian transport workers began an indefinite national strike demanding that the right-wing government of President Iván Duque revoke the suspension of driving licenses of over 45,000 of workers, who have been unable to work because of a traffic law on repeat offenses. The call for the strike was given by the Colombian Drivers’ Union.

According to the National Traffic Code, a driver is penalized when he violates a traffic rule more than once within six months and his driving license is suspended for a period of six months. The law also establishes that a driver can be changed with serious crimes and prosecuted for continuing the work with a suspended license.

“No one wants to help us with the problem of driving licenses that are suspended for months, a year or even a lifetime, for violating traffic rules,” said Hernando Chávez, representative of the union, calling on workers to halt their work. Chávez indicated that this year the driving license of over 13,000 drivers has been suspended for a year and of another 350 for a lifetime.

As per the figures available from the Mobility Secretariat, this year till the month of August, licenses of more than 33,000 drivers have been suspended due to repeat offenses only in Bogotá, leaving thousands of workers without any source of income and pushing their families to the streets. Chávez called the practice as a business and abuse of power by the traffic police officials.

The strike has been joined by truck drivers, taxi drivers, muleteers, minibus and inter-municipal bus drivers as well as drivers associated with digital transportation services such as Uber, Beat and Didi.

On the first day of the strike, workers mobilized in different departments of the country and blocked many important roads. In the capital Bogotá, a massive mobilization was held along with road blocks at key intersections like Ciudad de Cali Avenue, Boyacá Avenue, El Dorado Avenue, 68th Avenue and NQS Avenue. Hundreds of workers marched from these different avenues to Plaza de Bolivar. However, on their way, they were repressed by a special unit of the Colombian National Police, the Mobile Anti-Disturbance Squadron (ESMAD). At least five protesters were reported to have been injured severely. The actions left several parts of the country without transportation services.

Incidences of police repression were also reported in other parts of the country, where protesters blocked roads and prevented the movement of vehicles.

Chávez also informed that the transporters of municipalities of Pitalito, Florencia, Ocaña, Barranquilla and Medellín, among others would also join the strike. In total, at least 100,000 drivers have joined the strike throughout the country. Chávez reiterated that the demonstrations would continue until the authorities listen to their demands and modify article 124 of the National Traffic Code.

The strike was also called in rejection of the assassinations of drivers in recent months and to demand the government measures to ensure the security of the drivers.