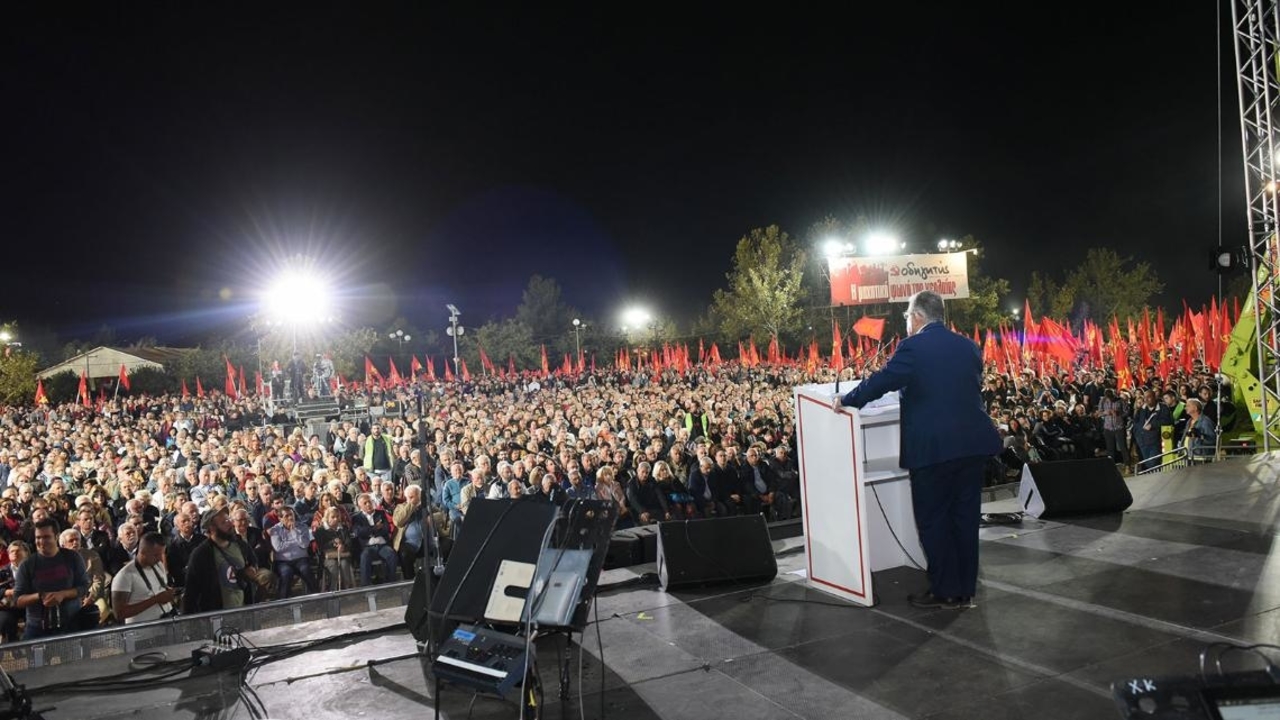 Dimitris Koutsoumbas, general secretary of the Central Committee of the Communist Party of Greece, addressing the closing ceremony of the KNE Odigits festival.

On September 21, the vibrant festivities of the 2019 KNE- Odigits festival culminated at the Antonis Tritsis Environmental Awareness Park in Athens, the main venue. The event had begun on September 19. The 45th edition of the annual festival was organized by the Communist Youth of Greece (KNE) and the Odigitis magazine, drawing tens of thousands of people, of all ages, from across Europe.

Dimitris Koutsoumbas, general secretary of the Central Committee of the Communist Party of Greece (KKE), addressed the closing ceremony of the festival saying, “KNE Festival, even though it is 45 years old now, remains always fresh. It evolves year by year, taking into consideration the contemporary worries and concerns of the young generation.”

“The festival is a pole of attraction for young people because when everyone tells them that things do not change, the festival presents a different point of view; with our struggles, dreams and strength we will build a free, open and hopeful world through Socialism. It is also a great opportunity for those who believe that they have undeniable answers within the framework of this system [capitalism], to reconsider their overall stance. Because much more is within the power of the young generation than what the defenders of the system are trying to convince them of! Every young person who feels aversion to today’s barbarity has their own place in our struggle, looking towards change, towards the new society that we need,” he added.

This year’s festival involved numerous events that were organized in over sixty locations, across Greece.

The three days of festivities at Thessaloniki, from September 12-14, included a massive political rally and an exhibition marking the 20th anniversary of the NATO-led aggression in erstwhile Yugoslavia.

Festivities in Patras, held from September 13-14, saw numerous concerts, performances and art works. The two-day event at Larrissa, from September 14-15 featured discussions, a political rally and an exhibition celebrating the centenary of the Communist International, besides including several concerts and activities for women, students and workers.

Various events were also organized in other regions of the country, including at Crete, Thrace, Aegean, Peloponnese and Thebes.

At the main venue in Athens, more than 30 Communist Youth organisations, from around the world, came together and installed their booths from September 19-21. Some of these were the “Student Stack”, the “Culture Stack” and the “Red Balloon” (a space for elementary and high school students). There were also some anti-drug and therapeutic community booths, along with booths for refugees, immigrants, young workers and those who are unemployed. A playground and bookstores were also available for the visitors.

During the three days of the festivities in Athens, a large exhibition titled “Proletarians of all countries unite”, marking the 100th anniversary of the founding of the Communist International, was also installed, in addition to other exhibits.

KNE’s Central Committee secretary, Nikos Abatielos, while addressing the closing ceremony in Athens, denounced the renewal of the Greek-US military cooperation agreement. He also condemned the anti-communist resolution passed by the European Parliament on September 19.

Abatielos proclaimed that “the dozens of Communist Youth participating in the 45th KNEE Festival make it clear in all tones, that anti-communism and the fabrication of history will not pass.”

“Whatever resolutions and decisions the European Union makes”, he added, “the future cannot be banned and that future is Socialism!”