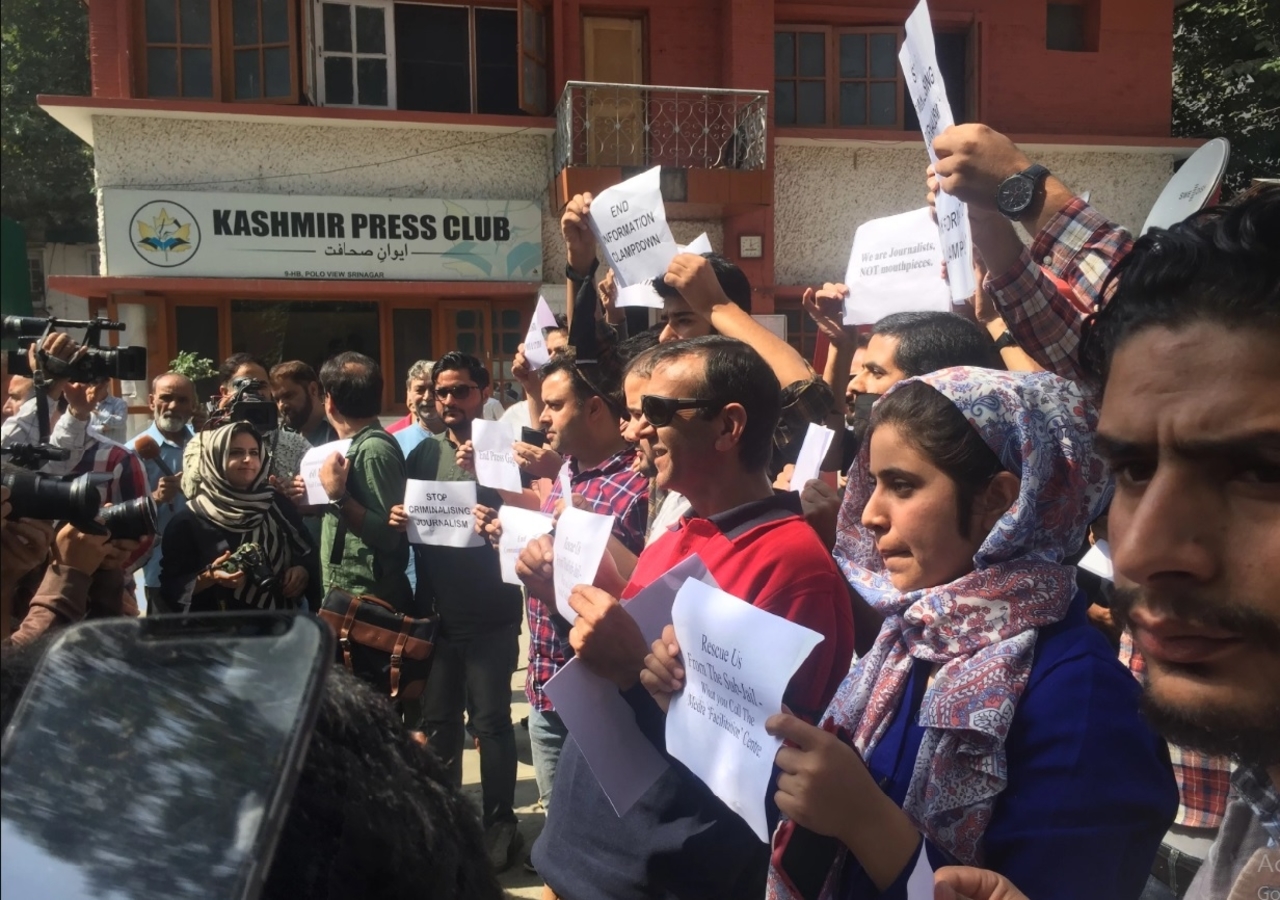 Kashmiri journalists hold a sit-in protest at the Kashmir Press Club in Srinagar on October 3, against the attack on press freedoms in the state and the harassment of members of the media during the ongoing communication blockade. (Photo: Anees Zargar)

At least 100 journalists associated with the local and international press, held a sit-in protest at the Kashmir Press Club in Srinagar, on October 3. They wore black masks and bands, while carrying placards reading slogans like, “Stop criminalizing journalism in Kashmir, End information blockade in Kashmir, End communication blockade, We are journalists not mouthpieces, Allow journalists to work freely.”

Ever since the clampdown in Jammu and Kashmir was imposed by the Narendra Modi-led Bharatiya Janata Party government on August 5, journalists and the larger media fraternity have been one of the worst affected. Due to an atmosphere of extreme fear and uncertainty created by this unprecedented siege, protests against the ongoing communication blockade are being held by media professionals.

During these months of the ongoing blockade, several journalists have been beaten up, harassed, humiliated and arrested by the Indian security forces, while reporting on the curfew that has been imposed by the state government. Qazi Shibli,  editor of The Kashmiriyat website, was detained on July 25. The Kashmir police then arbitrarily raided the house of Irfan Amin Malik in southern Tral at midnight, and arrested him on August 14. Another photo journalist from south Kashmir’s Kulgam was picked up by the Indian army as well. Similarly, Haziq Qadri, a correspondent for Brut India, and Aakash Hassan, a correspondent with Network18, were also detained briefly in August.

Haris Zargar, a senior journalist from Kashmir’s Srinagar was roughed up in Karan Nagar area on August 11. “We were planning to cover the protests. I told the counter-insurgency group officer that we were journalists and trying to reach Soura. The policeman asked me to get out of the car. He lined me up against the road divider and hit me with a fiberglass rod, abused and threatened me with dire consequences if I didn’t leave the spot immediately. He shouted he will break my bones,” Haris told Peoples Dispatch.

According to Rashid Maqbool, a journalist associated with the local newspaper Rising Kashmir, the people are being subjected to an unprecedented clampdown. “Our journalists take days to cover news as most of the modern tools of journalism, like phones and internet, have been rendered useless. The moment we follow an update it becomes stale given the number of hurdles created due to the clampdown,” he lamented.

In order to send out a message of normalcy in the Kashmir region to the world, the State police has set up a media center with a working broadband connection. Initially, the number of desktops functioning here were only four, but were later increased by a few more. There are security cameras also installed inside this “Media Facilitation Center”, where almost the entire journalist fraternity is being allowed to access the internet for only a brief 15 minutes. Many have termed it as a sub-jail, as in the times of modern information technology these make-shift exercises appear as an aberration from modernity, with the Indian government keeping a tight check on the media, in an attempt to control what is being reported on the situation in Kashmir.

Kashmiri Working Journalists Association termed the current situation as “utterly disabling and perilous.” In its statement, the association also claimed that with the ongoing harassment and pressure from the government agencies, the local media (which excludes online websites as most of them have been rendered completely defunct) and daily newspapers have also been forced to self-censor their content and news. Almost all the local newspapers are “avoiding reports about the human rights violations, even skipping reports about local protests, clashes, large-scale arrests and detentions, not daring to question the official propaganda, and sticking to government hand-outs, even if they fail to make sense on the ground,” the statement read.