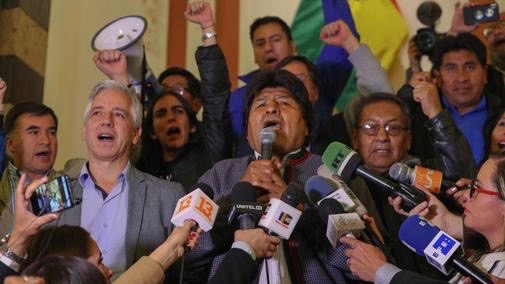 Bolivian President Evo Morales expressed his faith in people for an outright victory.

President Evo Morales seems to have emerged as the front runner in the presidential elections held in Bolivia on October 20. After around 83% of the votes were counted, the Supreme Electoral Tribunal of Bolivia (TSE) announced that Evo Morales of the Movement Towards Socialism (MAS) was leading with 45.3% of votes, followed by Carlos Mesa of a center-right political coalition called Citizen Community (CC) with 38.2%, Chi Hyun Chung of the Christian Democratic Party with 8.7% and Carlos Óscar Ortíz of Alianza Bolivia with 4.4%.

These preliminary results indicate a run-off between the top two candidates as neither received more than 50% of the votes or more than 40% of votes with a 10% lead over the second most voted candidate. If these results hold, Morales and Mesa will face-off in the second round on December 15.

After the preliminary results were announced, President Morales addressed the people of Bolivia through a press conference from the presidential palace and thanked the people for their support. He said that his party recognize the preliminary results and expressed with great optimism his faith in the remaining 17% of the votes from rural regions -that are yet to be counted- for a clear victory. “We are going to wait until the last vote is counted. I am sure that we will win again with the votes from rural areas,” said Morales.

Over 6.9 million Bolivians were eligible to vote and the TSE commended the high level of participation.

The elections were held to elect the country’s next president and vice-president as well as 36 senators and 130 members of parliament for the period of 2020-2025. With these results, Morales’ party, the MAS, obtained a majority in the lower house as well as the upper house of the Plurinational Legislative Assembly.

Before this victory, Morales tweeted: “There are four consecutive elections that we won. And most importantly, sisters and brothers, we, once again, have an absolute majority in the chambers of Deputies and Senators. This is the result of the conscience of the Bolivian people.”

In his speech Morales reiterated his commitment to the project of transformation that he began 13 years ago in 2006, when he first came to power. Under the governance of President Evo Morales and vice-president Álvario García Linera, Bolivia has experienced tremendous economic and social progress. The country’s economic growth has been consistent since 2006. From 2000 to 2012, the poverty rate dropped 32.2% in the country. In addition, the country registered a significant increase in the employment rate, salary and in the minimum wage during Morales’ governance.

While the neo-fascist leaders in many Latin American countries such as Argentina, Ecuador, Peru, Chile, etc. have been plunged their countries into chaos, imposing neoliberal economics and uncontrolled exploitation of natural resources, Bolivia established it’s economic programs on the nationalization, industrialization, and salvaging of state companies. Morales’ government initiated a number of social programs in healthcare, education, agriculture, and science and structurally transformed the social reality of the country.