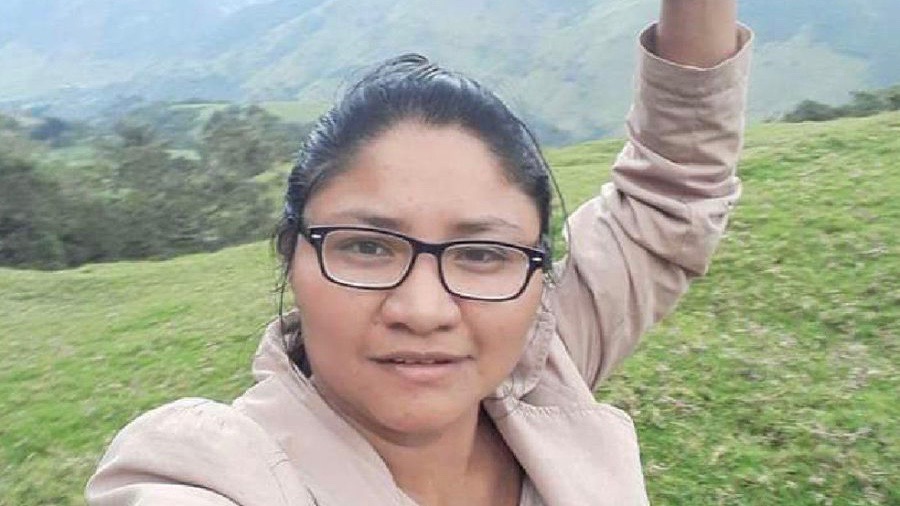 Cristina Bautista, leader of the Nasa Indigenous community, was one of the victims of the ambush in Cauca Department, Colombia, on October 29. Photo: Colombia Informa

The rampant persecution and assasination of Indigenous people continues in Colombia. On October 29, four members of the Indigenous Guardia and an Indigenous authority were killed in an armed attack in the Tacueyó town of the Toribío municipality in the Cauca Department in Colombia. In addition, six other people were seriously injured.

The Association of Indigenous Cabildos of Toribío, Tacueyo and San Francisco, Project Nasa, through an official statement informed that unidentified armed men, allegedly members of the ‘Dagoberto Ramos’ dissident group, ambushed the bus in which Indigenous guards were travelling and opened fire indiscriminately against them. The association reported that the attack continued for more than 10 minutes and that the attackers even fired at the ambulances transporting the injured people to the hospital. The association called on “human rights organizations, international organizations and the national government to pronounce, accompany and support the Nasa People.”

Among the fatal victims of the ambush were Cristina Bautista, leader of the Nasa Indigenous community, and the members of the Indigenous guard: Asdrubal Cayapu, Heliodoro Finscue, José Gerardo Soto and James Wilfredo Soto.

The Regional Indigenous Council of Cauca (CRIC) also condemned the massacre perpetrated by the armed group against the Indigenous community. The CRIC demanded that the national government guarantee the right to life and physical integrity of the Indigenous people.

The National Indigenous Organization of Colombia (ONIC) denounced the massacre and held a press conference today, on October 30, to reject the ceaseless aggression against Colombia’s Indigenous people. During the press conference, the Indigenous leaders held President Iván Duque’s administration responsible for the massacre and genocide, and cited that it has failed to provide the necessary security to the country’s Indigenous population despite constant denouncements from Indigenous organization over threats to their physical safety. The organization demanded immediate resignation of the Ministers of Defense and Interior responsible, who they claim have done nothing to prevent the persistent violence in the region. The organization also gave the call for a ‘National Mobilization for Life’ on November 8.

Gustavo Petro, the head of Colombia Humana, a left-wing political platform, expressed his concerns about the massacre of Indigenous people in Tacueyó and requested the attention of the International Criminal Court to the matter. “In Colombia, an indigenous genocide is in progress and it will not stop if international justice does not intervene,” he tweeted.

Senator Gustavo Bolívar and Aída Avella called on people to take part in the vigil in the evening at the Plaza de Bolívar to commemorate the victims of the massacre of Tacueyó.

Two weeks ago, the CRIC had also denounced the murder of Toribio Canoas, an Indigenous guard in Tacueyó. Earlier, in the month of August, at least three incidents of violent killings of Indigeous guards and leaders were registered in Cauca. According to the ONIC, so far in 2019, more than 120 Indigenous people have been killed in the country.

Cauca is one of the departments most affected by the armed group violence in the country, where indigenous people are the main victims. The Indigenous Guardia is a humanitarian mechanism of civil resistance of the Indigenous communities of North Cauca that has spread to Indigenous, Afro-Descendant and Peasant communities across the country. The members of the Indigenous Guardia defend the ancestral territories and people from actors that attack them. This is the reason why they have become the main target of drug trafficking, illegal mining and other paramilitary groups operating in the country.

Since Duque took office in August 2018, the humanitarian crisis in Colombia has escalated not only for Indigenous communities, but for all those who fight for peace, structural changes and rights. Instead of taking structural measures to eradicate violence from Indigenous territories, he has stigmatized these communities and their social struggles. He has also repeatedly jeopardized the country’s peace, by questioning the peace agreements signed between the guerrilla group, Revolutionary Armed Forces of Colombia (FARC) and the government of former President Juan Manuel Santos and suspending talks with the revolutionary left-wing armed group, the National Liberation Army (ELN).