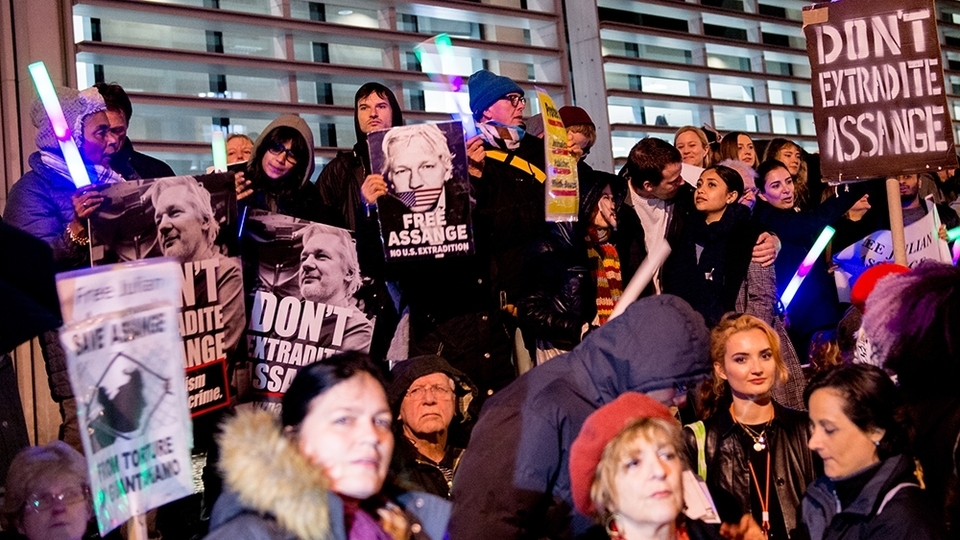 Hundreds attended a rally in London on November 5 to protest US attempts to extradite Wikileaks founder Julian Assange. The ‘Don’t Extradite Assange’ rally was held outside the UK Home Office in London and was addressed by Assange’s father John Shipton, who has been campaigning for his release in Australia and the UK. Many of the protesters wore masks with Assange’s face.

The rally attracted widespread attention after British rapper and musician Mathangi Arulpragasam, more popularly known as M.I.A., confirmed that she would be performing in support of Assange. M.I.A was joined by another rapper, Kareem Dennis, known as Lowkey, who performed a piece in tribute to Assange.

Fashion designer Vivienne Westwood was also among the speakers demanding his release and donned an Assange mask as well. Other speakers included John Rees from Stop the War Coalition and Srećko Horvat, Croatian philosopher and co-founder of DiEM25, who had also paid Assange a visit earlier in the day at Belmarsh prison where he is currently being held.

Once Upon a time there were men with beards…

Later it could be u or me

Coz Jesus loves me.

C u tonight 6pm outside the home office pic.twitter.com/v1BPSomhoP

Assange has been languishing in the high-security prison for several months now, after he was sentenced to 50 weeks by a local British court for violating his bail conditions. He has been put in solitary confinement by the prison authorities. In a detailed account of the trial, former British diplomat Craig Murray said it was akin to a show trial, and that the prosecution and the court were engaging in “case management,” only to arrive at a time-table for his extradition.

According to various reports, Assange’s health has deteriorated rapidly in jail and he has lost nearly 15 kg. The UN Special Rapporteur on Torture, Nils Melzer, and Murray have pointed out that Assange is even displaying signs of being tortured. Assange’s deteriorating health was visible to all when he appeared for his extradition hearing on October 21, at the Westminster Magistrates Court.

The trailblazing publisher is currently facing an extradition request by US federal prosecutors who want him to stand trial in the US on espionage charges that could carry a total of 175 years of imprisonment. Meanwhile, several activists and celebrities have called for the immediate release of Assange over concerns for his health.

In Australia, similar concerns regarding Assange’s health and the nature of the looming US prosecution have led to a call for his return by leaders across the political spectrum. Many in Australia have stated that the extradition will be an infringement on the political sovereignty of Australia, especially since the charges against him are political in nature.

Assange’s father John Shipton was the first to speak at the rally in London. He thanked those assembled on behalf of Assange and pointed out that the many movements, along with parliamentarians from across the world, had come forward in support of his son. He ended his address on a hopeful note, telling the crowd that “not only can we win, but let me tell you we are winning.”

Vivienne Westwood cited Murray’s report on Assange’s trial to point out that “the guilty verdict is already decided.” Westwood echoed the concerns about his health, saying that “Julian Assange will die unless we set him free.” The protesters at the rally chanted slogans calling for his release and also demanded that the judge presiding over his case be replaced, as she has been accused by many for acting in a prejudicial manner.

Srećko Horvat also addressed the crowd, opening with the details of his meeting with Assange. He passed on a message from Belmarsh to the protesters, telling them that, “this is not about me, this is about you.” Horvat reiterated Assange’s message that, “it is about freedom of the press, freedom of speech, it is about human rights. It is about democracy.”

“No one has fought for us the way he has,” M.I.A, who was the last to speak, told the crowd, emphasizing that she too has been a victim of slander. She added that, “just because he isn’t part of corporate news, that makes billions of dollars handing out fake news, he shouldn’t be the one that pays the price.”