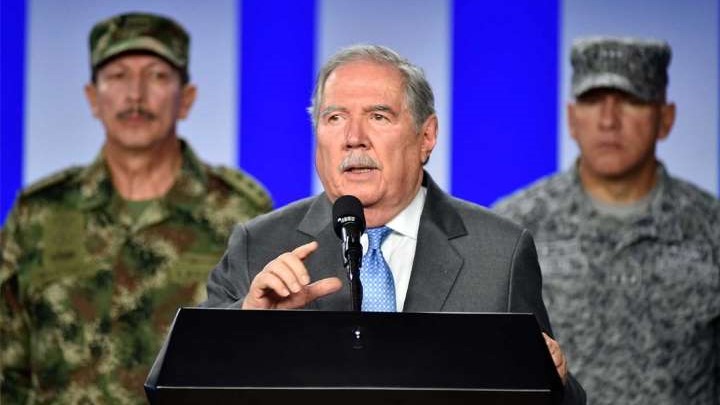 Colombian minister of defense Guillermo Botero resigned after an investigation revealed that at least eight children were killed in a bombing he had ordered. The incident took place on August 29 and immediately after, the government claimed that “14 criminals,” members of a supposed Revolutionary Armed Forces of Colombia (FARC) dissident group had been killed. After news of the death of the children came out and the minister’s role was revealed, several center-right parties in the Colombian congress announced that they would support a motion of no-confidence against him. Shortly after, with no options left, Botero announced his resignation.

The information about the bombing was presented by senator Roy Barreras of the Social Party of National Unity on November 5, Tuesday, during the debate on the no-confidence motion against Botero. Barreras said that on September 2, when the minister announced the “results” of a military operation in San Vicente de Caguán in the department of Caquetá against the supposed FARC dissident group, he proudly announced, “14 criminals have been killed” and hid the fact that eight minors had been killed.

The senator revealed that the coroner’s report on the victims of the bombing had identified the eight minors. Among those killed were Abimiller Morales (17), Willmer Castro (17), Diana Medina (16), José Rojas Andrade (15), Jhon Edinson Pinzón (17), Sandra Patricia Vargas (16) and Ángela María Gaitán (12). The eighth minor’s identity is still unknown.

The day before the bombing, a section of the FARC announced their return to armed struggle. President Ivan Duque authorized an offensive operation against the “group of narco-terrorist criminals” and rewards of 3 billion Colombian pesos for apprehending each person who appeared in the video in which the announcement was made.

Many have denounced that not only did the Colombian government hide the fact that the children were killed in the bombing, but they were also aware that children were present when they ordered the bombing. A local official, Herner Carreño, from the neighboring municipality of Puerto Rico reported that the government had knowledge about the presence of minors in the camp before the bombing as he himself made numerous denouncements to different government authorities and the Public Force about the forcible recruitment of minors to armed groups in the zone.

After the operation was carried out, president Duque characterized it as “meticulous, impeccable and with great rigor.”

During the debate, former president and and current right-wing senator, and political mentor of Duque, Álvaro Uribe, of the Democratic Center party, supported Botero and the decisions of the government. He justified their actions stating: “If there are children in a terrorist camp, what does one think? Would they have gone there for curiosity to play football or were they recruited by the terrorist?”

The debate on the motion of no-confidence was called for by Barreras in response to concerns over issues of security and violence in Colombia. Some of the key issues are the alarming number of assassinations of social leaders, human rights defenders and ex-combatants, the growing number of legal cases against members of the armed forces for grave violations, and the recent cases of extrajudicial executions by the Colombian army. Botero and the army tried to hide the truth about many of these executions and suggested that those killed were active combatants. The cases of Dimar Torres, a FARC ex-combatant who was assassinated by the army in April in the Catatumbo region, and peasant leader Flower Jair Trompeta Paví were examples of this.

The resignation of Botero is a definite win against the institutionalized impunity enjoyed by members of the Colombian government and armed forces. These sections have for decades ordered and carried out assassinations of innocent civilians and members of the insurgencies in order to show positive results in their ‘war on crime and terrorism.’ As lawsuits against directives and members of the army begin to multiply, this impunity will be chipped at little by little. However, the fact does remain that Colombia is still under the leadership of Iván Duque who is following the same script as his mentor Álvaro Uribe.

Hours after Botero’s resignation, a journalist from the Colombian news organization El Heraldo approached Duque when he was leaving an event at a city on the northern coast of Colombia and asked him about the bombing. Duque responded “What are you talking about man??” and the journalist was apprehended by security. Duque has yet to comment on the bombing but tweeted that he accepted the resignation of Botero and thanked him for “his commitment, sacrifice, and leadership in the sector. Thanks to his management we achieved excellent results in these 15 months.”