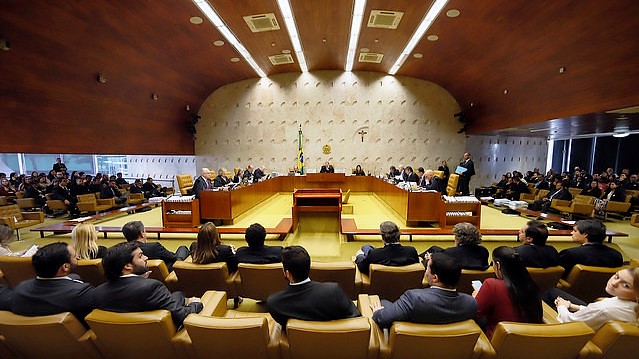 The Brazilian Supreme Court declared on Thursday, November 7, that a person convicted in a case can only be imprisoned after all possibilities of appeal are exhausted. The debate which began on October 23 was finalized on Thursday with a vote of 6 to 5 in favor of this position.

The decision is considered the most important of the year, and could result in the freedom of almost 5 thousand people who are incarcerated without a firm conviction, among them ex-president Luiz Inácio Lula da Silva, a political prisoner since April of last year.

The decision will be implemented by sentencing judges on a case-by-case basis, with the possibility of enforcing preventative prison.

The session held this Thursday, the third on this issue, began with a partial vote tally of 4 to 3 in favor of incarceration after the first appeal with justices Carmen Lúcia, Gilmar Mendes, Celso de Mello and the president of the court Dias Toffoli to be the deciding votes.

Carmen Lúcia reiterated her traditional position with regards to the issue, voting in favor of imprisonment after losing the first appeal.

Gilmar Mendes, who in the past has supported imprisonment after a conviction is upheld in the first appeal, changed his position on the issue. When he presented his vote, he explained the change in his position and said that the case of former president Lula da Silva had influenced this shift.

“The case of Lula contaminated the discussion. This did not contribute to the rational debate. People can suspect I am many things, but not of being a Workers’ Party supporter. The Lula case shows how the system works badly. And I am not talking about The Intercept. The fight against corruption should be done within the framework of legal due process,” he said.

Celso de Mello, who voted after Mendes, also was against imprisonment after a conviction is upheld in the first appeal. He affirmed that, despite the gravity of corruption in the country, the guidelines established by the Constitution should be observed in their totality.

Dias Toffoli, who was the last to vote as he is the president of the Court, began explaining his position affirming that the technical question in the present process is related to the adjustment of the rules of the Penal Code in accordance with the Constitution.

In this sense, he affirmed that the legislators who wrote the penal code were in agreement with the constitutional text in establishing that imprisonment is only possible after exhausting all possible appeals. He indicated, on the other hand, that there would not be a problem in the case that the Congress would in the future want to modify this legal norm.

According to Zanin, “the decision of the Supreme Court confirms what we have always said: there is no possibility of an early execution of the sentence. The ex-president has been incarcerated for the last 580 days, contrary to what is in our Constitution.”

By law, Lula could already be in a semi-open condition, but he had denied the modification of his sentence because he believes that it would damage his dignity. “I want you to know that I do not accept bargaining of my rights or my liberty,” the former president said.

::Exclusive | Lula: “We have to recover the Brazilian people’s rebellious spirit”::

This Thursday, the lawyers of the former president, Cristiano Zanin Martins and Valeska Martins, also affirmed that they will reiterate the request for the Supreme Court to rule on the habeas corpus that asks for the annulation of the process, alleging the “dishonesty of the former judge Sergio Moro and of the prosecutors of Operation Car Wash, among other numerous illegalities.”

On October 23, the justice overseeing the case, Marco Aurélio Mello, voted against imprisonment after one appeal. He affirmed that the harmony between the Penal Code and the Constitution is “complete” and, as such, imprisonment is only possible after exhausting all appeal options and legal resources.

Alexandre de Moraes presented a divergent position. He stated that the position in favor of imprisonment after the first appeal prevailed for twenty four years and began with the promulgation of the Constitution of 1988.

Edson Fachin and Luís Roberto Barroso followed the position of Moraes and the first day of voting was closed at 3 to 1.

In the second day of voting, October 24, the expectation was around the position of Rosa Weber. This is because she had already raised questions on this issue in the ruling on the habeas corpus of the ex-president Luiz Inácio Lula da Silva.

Weber, who voted against imprisonment after the first appeal, stated, “The Supreme Court is the guardian of the Constitution, not its author. When the judge is more rigid than the law, it is unjust. We were not given this authority to declare the Constitution itself unconstitutional.”

The same day, Luiz Fux voted in support of imprisonment after one appeal, while Ricardo Levandowski voted against, leaving the vote tally at 4 to 3 against the literal interpretation of the Constitution.

Imprisonment after the first appeal

The majority of the judges of the Supreme Court decided, in 2016, that the Court could request imprisonment of those who were accused and whose conviction was upheld in their first appeal. Item 57 of article 5 of the Constitution affirms that “no one will be considered guilty until all of the resources of the adverse judgment are exhausted.”

In communication with Brasil de Fato, legal experts classified imprisonment after a conviction in the first appeal as a “clear and frontal violation” of the Constitution and the Penal Code, and even an interpretation that “violates logic,” a product of a “vulgar debate.”