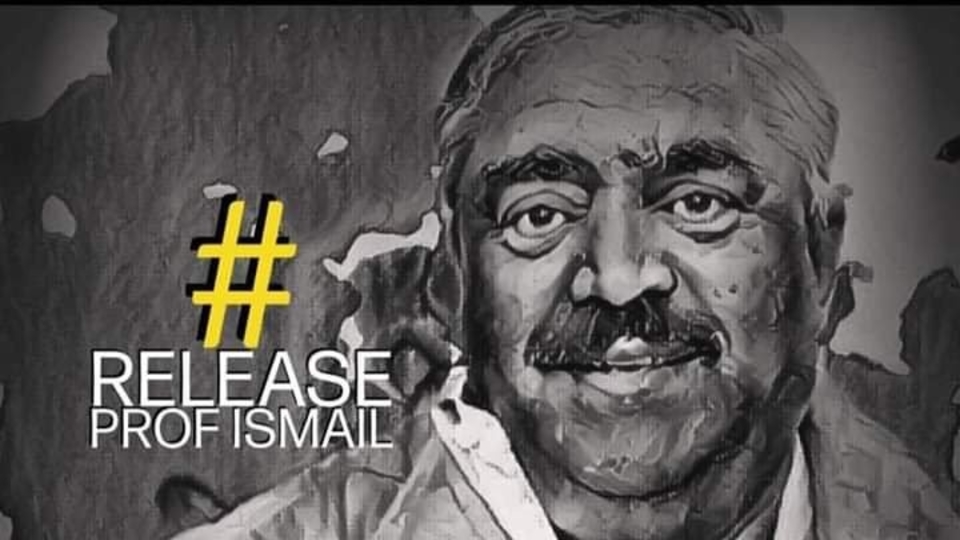 Mohammad Ismail has been arrested for allegedly speaking against government institutions in Pakistan.

In yet another attempt to curb dissent, Pakistani state authorities have targeted 64-year-old activist and professor, Mohammad Ismail, who is also the father of prominent women’s rights activist, Gulalai Ismail. Arrested on October 24, Ismail was issued 14 days of judicial remand under provisions of the draconian anti-terror laws in the country. His bail plea was rejected by a court on November 4.

Ismail, who teaches Urdu literature, has been facing continuous “surveillance, threats and intimidation” for the last six months, according to Amnesty International. His house was raided multiple times by “men wearing militia dress.” Amnesty has called him a “prisoner of conscience” and has demanded his immediate release.

Regarding his bail plea, his daughter Gulalai Ismail noted that the court’s rejection comes despite the fact the cyber crime case against him, for allegedly speaking against government institutions, is malicious. “He was abducted right from the premises of high court. I’m disappointed with the unfairness  of the court,” she tweeted.

According to local reports, the professor was picked up by unidentified men outside the Peshawar High Court on the same day he appeared for the hearing. His family also confirmed that they were only informed about his whereabouts later in the night, when he was brought into the custody of the Cyber Crime Wing of the Federal Investigation Agency in Peshawar.

“(Now) I’ve been informed that my father is treated miserably in the prison. He has been denied a medical checkup and medical assistance in the detention center. Though as a political prisoner, he qualifies to be given Class-B but he has been kept in the worst barrack,” she added further.

32-year-old Gulalai Ismail is a well-known human rights defender from Pakistan and has been recognized for her advocacy on women’s rights. Her outspoken support for Pakistan’s Pashtun Tahaffuz Movement – a movement that campaigns against extrajudicial executions, enforced disappearances and other human rights violations suffered by Pakistan’s Pashtun population – is widely believed to be the reason for her family being intentionally targeted and harassed by the Pakistani agencies, especially since she applied for political asylum in the US.

“Relentless crackdown against me by the state had a huge mental toll on my parents, the trolls may see it as a matter of political asylum or glorification but it has destroyed my parents health and well being,” Gulalai stated.

In the First Information Report (FIR) registered against Mohammad Ismail on 12 July 2019, the police had accused him of obtaining funding from “foreign countries” and aiding “terrorist organizations” under the guise of social work. “The complaint is regarding … hate speech and fake information against government institutions of Pakistan on Facebook and Twitter,” the FIR read.

“Professor Ismail is suffering from multiple health problems and his detention will likely exacerbate them. Freedom of expression, assembly and association have come under attack in Pakistan in recent years. Human rights defenders and journalists face restrictions in both online and offline spaces. The clampdown on civic space has intensified in 2019, through draconian laws that enable violations of human rights,” Amnesty said in its statement.

In a letter sent to the Pakistan foreign affairs ministry, the group states, “We call upon your government to immediately and unconditionally drop all charges against Professor Ismail.”