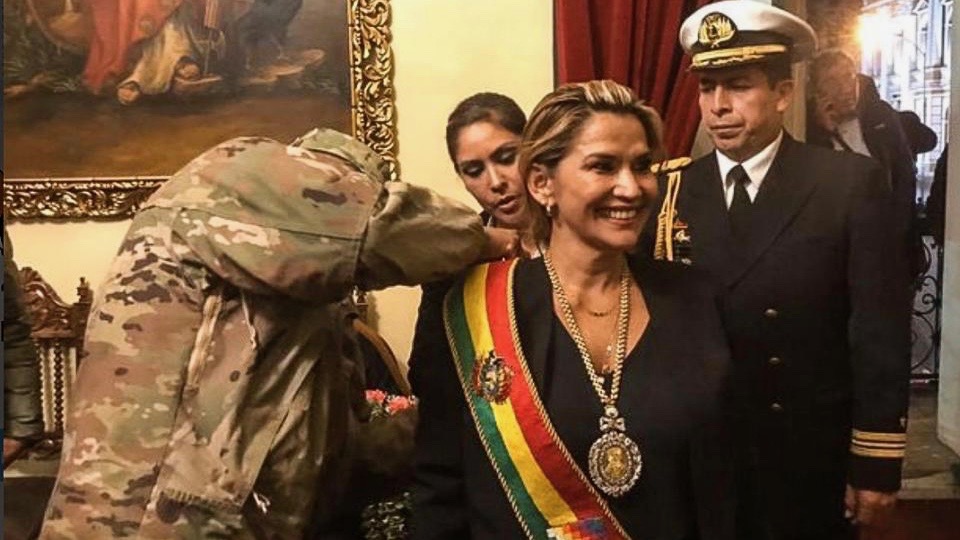 Amid increased repression against anti-coup protesters by Bolivia’s Security Forces, the de-facto government of self-proclaimed ‘interim president’ of Bolivia Jeanine Áñez passed a decree which protesters claim will embolden Security Forces even further.

The Supreme Decree no. 4078, passed on November 15 states that the personnel of the Armed Forces of Bolivia “participating in the operations for the restoration of order and public stability”, will be “exempted from criminal liability” when “in compliance with their constitutional functions, as they act in self-defense or in the state of need.”

The order also authorizes the security forces to use extreme force to suppress social protests. “The Armed Forces must frame their actions as established in the approved Manual on the Use of Force (…) and may make use of all available means that are proportional to the operational risk,” reads the decree.

Said decree was issued on the same day that the massacre was carried out in Cochabamba, in which over 9 protesters were killed by the security forces and hundreds were gravely injured. It has received widespread condemnation nationally and internationally.

National condemnation of the decree

The decree has been widely denounced across social sectors in Bolivia. The working-class, Indigenous people, social movements and human rights organizations that have been on the streets mobilizing in defense of Evo Morales and against the coup have condemned the decree not only for protecting the repressive forces but also for encouraging violent repression. They have deemed it “the decree of death”.

The immediate withdrawal of the decree as well as the resignation of self-proclaimed ‘president’ Áñez, have become central demands in the nearly daily protests carried out by thousands of Bolivians in areas across the country.

Yesterday, on November 18, thousands of people from the 20 provinces of the La Paz department and the 14 districts of the El Alto municipality, carried out multitudinous marches to the capital city to reject “the decree of death”. Similar large-scale mobilizations, rejecting excessive use of force against peacefully demonstrating people, were carried out in the Santa Cruz and other departments of the country.

Indigenous, peasant and social organizations as well as trade unions, such as the Six Federations of the Tropic of Cochabamba, the Federation of Neighborhood Councils of El Alto (FEJUVE), the Executive Committee of the United Trade Union Confederation of Bolivia (CSUTCB), the Trade Union Confederation of Intercultural Communities of Bolivia, the Peasant Workers Federation ‘Ponchos Rojos’, among others, also condemned the aforementioned decree, the massacre in Sacaba and the violation of human rights by the de facto government.

On November 17, the organizations gave the self-proclaimed president an ultimatum of 48-hours to resign from her position. They also demanded the expulsion of Carlos Mesa, Luis Fernando Camacho, and other coup perpetrators, from the country for inciting violence among Bolivians.

The organizations also demanded an immediate withdrawal of the armed forces from the streets and immediate release of detained people, leaders and democratically elected authorities. They declared that if their demands were not met, they would adopt more radical measures, such as indefinite strikes in all parts of the country and the erection of road blockades at a national level, to block all 100,000 interdepartmental and inter-provincial roads.

The legislators of Morales’ party, the Movement Towards Socialism (MAS), also denounced the decree and said that it grants a “license to kill” to the Armed Forces. The MAS leaders announced that they would present an appeal of unconstitutionality before the Constitutional Court against the decree.

International condemnation of the decree

The United Nations High Commissioner for Human Rights, Michelle Bachelet, also expressed her concerns about the unnecessary and disproportionate use of force in Bolivia, though she has been widely criticized for not taking a firmer stance on the issue.

Amnesty International said that Decree 4078 should be revoked immediately and that it is necessary to ensure that security forces act in accordance with international norms and standards on the use of force. They also stated that security forces should protect the human rights of all people who protest regardless of their political opinion. In addition, the international human rights organization demanded that the decree must be revoked immediately.

The coup-supporting Police Force and Armed Forces have been brutally repressing those in the streets against the coup. They are attacking the multitudinous mobilizations with tear gas, firearms, beating up and arresting protesters and people suspected of pertaining to Morales’ party, the Movement Towards Socialism (MAS) and carrying out violent house raids.

The protesters have denounced that the repressive measures have been intensified after the decree was ruled.

Yesterday, on November 18, in the Cochabamba department, the national security officials brutally repressed another demonstration by coca farmers. On the road that joins the capital of Cochabamba with the municipality of Sacaba, a police-military contingent attacked the coca farmers and prevented them from advancing towards the capital. The security agents used a large amount of tear gas, suffocating dozens of people. In addition, the agents shot rubber pellets against the protesters, injuring a dozen people and arrested more than 30 protesters.

A day before, on November 17, in El Alto city, a young journalist who was video recording the anti-coup protest, was shot dead by the military officials. The same day, in the capital city, La Paz, a police and military contingent prevented a peaceful multitudinous mobilization from entering the capital and sprayed poisonous gas against them.

Similarly, in Cochabamba city, a group of protesters denounced that the national security forces locked demonstrators mobilizing with white flags in a tunnel for several hours. They reported that the officials closed the entry and exit points of the tunnel while hundreds of people were inside. The inhabitants of Villa Pagador city, who maintained blockades of roads in the city, also denounced that they were attacked by both the police and military forces with tear gas late in the night.

The illegitimate government has not only intensified repressive measures against the demonstrations in support of Morales, but has also threatened to start institutional persecution of the MAS legislators. Arturo Murillo, a cabinet minister of Áñez’s ‘government,’ announced that they would create a “special apparatus of the Prosecutor’s Office” to carry out the arrests of those deputies and senators who oppose the coup. Murillo said that there are several MAS legislators who are inciting violence and that legal action against them would soon be initiated.

Evo Morales and the people of Bolivia have continued to receive immense support internationally. Yesterday, on November 18, a massive mobilization was carried out in Buenos Aires, Argentina, in support of the constitutional government of MAS and Evo Morales. Tens of thousands of people marched to the Plaza de Mayo to express their support to the popular resistance against the unlawful government. The Bolivian community in Argentina was key to delivering Evo’s victory in the elections held on October 20.

On November 17, mobilizations against the right-wing coup and violence were carried out in Brazil and Peru. In São Paulo, Brazil, thousands of Bolivians living in Brazil and along with Brazilian social and political leaders mobilized to the center of the city to reject the right-wing coup in Bolivia. Likewise, in the Junín region of Peru, members of the left-wing political party, Peru Libre, along with the party leader, Vladimir Cerrón, carried out a march in solidarity with Morales and the struggle of the Bolivian people against the fascist government.