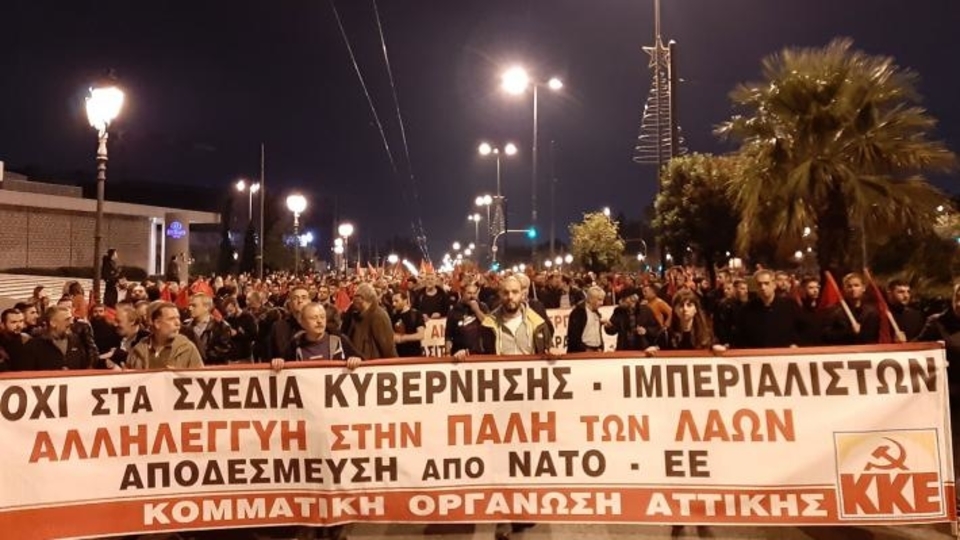 On November 17, Sunday, tens of thousands of Greeks took part in an anti-imperialist march to the US embassy in Athens on the occasion of the 46th anniversary of the Polytechnic Uprising against the US-backed military junta in Greece. The march was attended by various political groups, including the Communist Party of Greece (KKE), Communist Youth of Greece (KNE) and All Workers Militant Front (PAME), along with other student, anti-imperialist, anti-war and anti-NATO groups. The uprising took place on November 14, 1973.

The marchers raised banners against the right-wing government in Greece, NATO and the European Union, 902.gr reported. They carried messages such as “No to government and imperialist plans,” “Solidarity with peoples’ struggle” and “Free from NATO and the EU.” Demonstrators associated with the KKE and the KNE burnt the US, EU and NATO flags outside the embassy, declaring their opposition to the imperialist plans and military interventions by these powers.

Some reports claimed that more than 30,000 people marched in Athens and around 10,000 people participated in the march in Thessaloniki. Massive rallies were also organized in Patras, Volos, Xanthi, Larrisa, Heraklion, Chakilda and Lefkada. A massive column of students also carried out a march on Sunday, with a blood stained Greek national flag, reminiscent of the uprising of 1973.

The Communist Party of Greece (KKE) also said in their statement, “The slogans of the Polytechnic uprising are as timely as ever in the struggle against the policies that lead the people to poverty, unemployment, insecurity, against the involvement of Greece in the imperialist designs of NATO – US – EU, and against repression and authoritarianism.”

“It’s not coincidental that in Athens, the great anti-imperialist rally, marching through the central streets of the city, concluded in front of the American Embassy, to remind one that the imposition of the military dictatorship in 1967 served ‘by fire and iron’ the interests of the bourgeois class at the expense of the people, implementing the plans of the US and NATO imperialists, and culminating in the coup of Cyprus that led to the Turkish invasion and occupation,” KKE further added.

The Athens Polytechnic uprising began as a massive demonstration of the popular rejection of the right-wing US-backed military junta that ruled Greece between 1967 – 1974. On that day, a students’ strike in the Athens Polytechnic escalated into an open anti-junta revolt, ending in bloodshed in the early hours of November 17. A series of events to brutally suppress the uprising were perpetrated, starting with a tank crashing through the gates of the polytechnic. Diomidis Komninos, a Greek high school student, the first casualty, and was shot opposite the main gate of the Polytechnic.

The student uprising is hailed by many as a valiant act of resistance against the military dictatorship, and therefore as a symbol of resistance to tyranny.