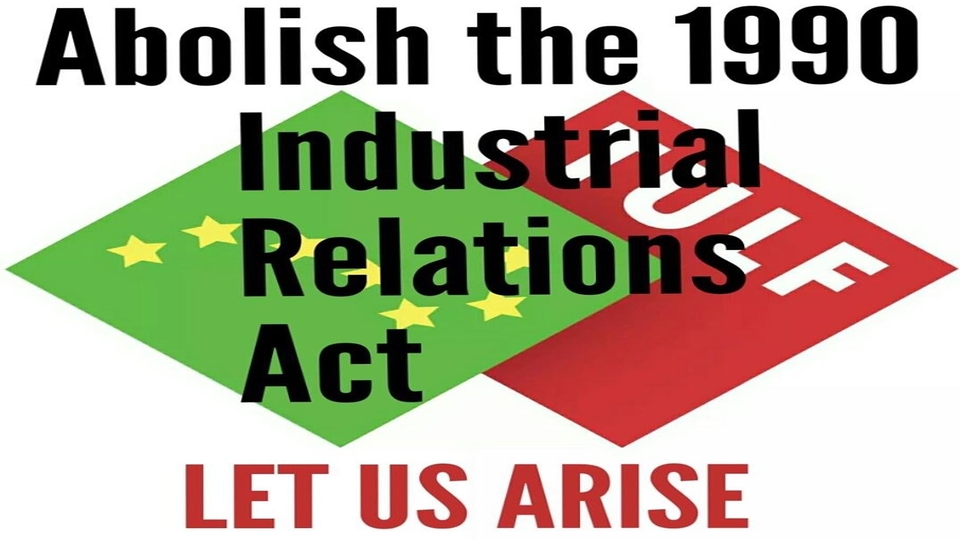 The Industrial Relations Act (IRA) was introduced in Ireland on July 18, 1990, as a mechanism to control trade unions. It was a response to an equivalent legislation that was introduced in Britain due to the rising strikes and industrial unrest emerging from popular dissatisfaction in the 1970s and 80s, when the post-war gains made by workers under social democracy were slashed. Unions were being softened, and having gotten too cozy with the state under social partnership, allowed the IRA to be introduced with minimum fuss.

Within some unions, major issues were raised with respect to many parts of the act, covering political strikes, secondary pickets, individual workers’ rights and the changes in requirements covering strike ballots. However, the act was accepted and passed, with reassurances and guarantees being given by the then Minister for Labour, Bertie Ahern. As he was an ex-union official he was regarded as a friend of the unions, who was sympathetic to the issue of workers’ rights.

The IRA introduced many changes to the accepted norms of industrial relations up till that time. The definition of a worker was made very loose, and self-employed and contract workers were left vulnerable to the growing gig economy. Bogus self-employment was on the rise, which has huge implications even today.

In single worker disputes too, the individual worker was left extremely vulnerable, as the new act stipulated that all agreed procedures must be exhausted before collective action could be taken. Thus any issue or dispute must be dealt with by a Rights Commissioner, the Workplace Relations Commission and the Labour Court, before collective action could be called for. The whole procedure could take months, if not years, with no guarantee of reinstatement at the end. The dragging out of this process for months and years effectively removed the power of instant action by co-workers in support of the individual worker. Through a lengthy bureaucratic ordeal, the strength and fight of the workers’ movement was sought to be diminished over time. Thus the IRA left individual workers at a huge disadvantage, striking at the very heart of the trade union principle of “an injury to one is an injury to all.”

However, the workers of the public sector enterprises in Ireland – which has been undergoing rampant privatization drives – seem more vulnerable presently. Particularly vulnerable in this regard are the employees of the state transport company, Córas Iompair Éireann (CIÉ) in Ireland, which has decided to sell off 10% of its service to private operators. More of the same can be expected down the line as the scepter of privatization hovers over Ireland. This will also have huge implications for the Electricity Supply Board (ESB), the state-owned electricity supply network, along with all state sector workers.

Additionally, under the act, secondary picketing and support strikes have been banned. During the recent Bus Éireann dispute, it was the secondary picketing at the Dublin Bus depots and the Irish Rail depots that eventually forced the company to come to the negotiating table, however, this was illegal and could have greatly cost for the trade unions involved. The unions could have lost their negotiating licence and their assets would have been seized if it was proven that they were behind the illegal action.

Also as per the act, a secret ballot of all members must be carried out before any strike action can be taken. In case of a majority vote in favor of strike action, the union executive has the final say in granting a go ahead for the strike. No similar authority is mentioned in case of a minority vote for strike action. It has been observed that as a result of this rule, union executives are generally reluctant to sanction strikes unless there is an overwhelming majority in favor of it.

Additionally, if a decision to strike is taken, a seven days notice must be given to the employer. However, some industrial disputes require immediate action, especially in cases where the health and safety of workers is affected. In another example, the recent Clerys department store situation where the business was sold and immediately closed down, resulting in the loss of 400 jobs, also required immediate action, but would be illegal under the 1990 IRA .

Even sit-ins are deemed as illegal under the act. Such restrictions only weaken the workers, while the employers are strengthened through endless possibilities for litigation to seek judicial interpretations regarding what qualifies as a legitimate strike, legal ballot or dispute.

While ballots were earlier a purely internal matter for the trade unions, the 1990 act gives employers the power to question how they are carried out. Essentially, the decision is put in the hands of the judiciary, which has often ruled against the workers of Ireland. In the recent Ryanair pilots dispute, a court injunction against the union was secured on the grounds that only 70 workers out of the 180 entitled to a vote, actually voted. This demonstrates the power of the 1990 act. In this manner strikes and industrial action may be delayed for weeks, allowing employers to take actions to lessen the effect of strikes.

Employers also have the ability to sue unions and officials for the loss of revenue due to industrial action, also made possible by the IRA. This is a huge weakening of the labor movement, as under the previous 1906 Act unions were exempt from such action.

Trade unions act to promote values of social solidarity and provide a check on the socially corrosive effects of the markets and individualism. In this respect, the 1990 IRA has been considered the worst dilution of workers rights in the history of Ireland. In a 1997 survey, 73% of union officials said that the IRA was a mistake, and should not have been accepted in its current form.

There is a growing campaign to have this act abolished and replaced with the right to union access, union recognition and full collective bargaining rights. Four trade unions – representing almost 200,000 workers a third of all union members in the country – have already made it their policy to have the act abolished.

With pay conditions under attack, along with rising inequality and poverty, the working classes in Ireland are in a state of crisis. In order for the workers to defend themselves under the current neo-liberal climate, there is an urgent need to repeal the 1990 act, and to strengthen worker’s power by bringing back pride and solidarity among them, if the trade union movement is to survive.

People in a struggle gain class consciousness through that struggle. It is time for the trade union movement to fight back against the class war being waged on workers in the country. In order to do that, the balance of power must be tipped from capital to labor, the first step towards which is the repeal of the 1990 Industrial Relations Act and the equivalent anti-union legislation in Northern Ireland. Unions must become radical or redundant.