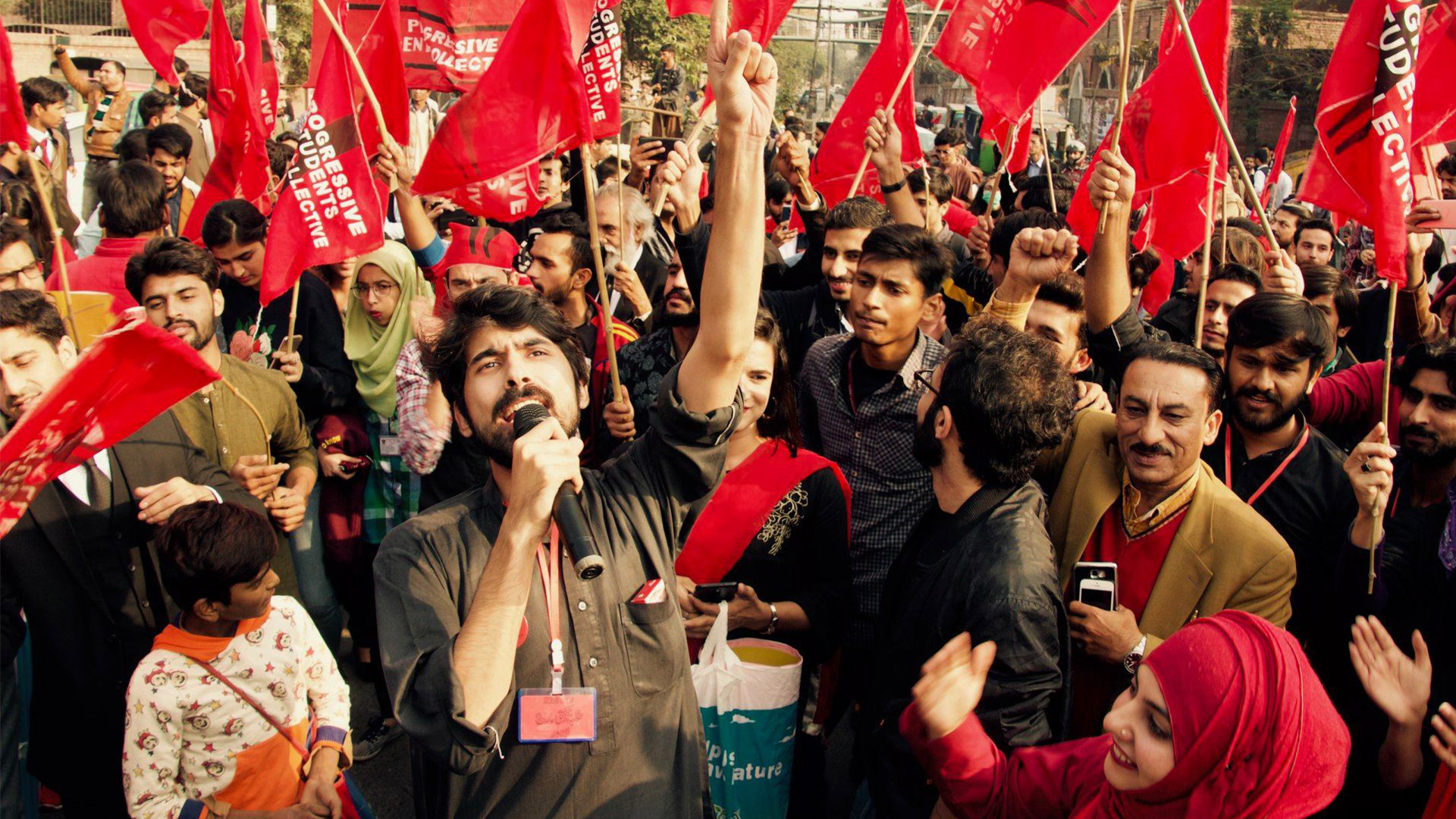 “Sarfaroshi ki tamanna ab hamare dil mein hai, Dekhna hai zor kitna baazu-e-qatil mein hai” [The desire for revolution is in our hearts, we shall see how much strength lies in the arms of the enemy]. On Friday, November 29, the whole of Pakistan reverberated with this revolutionary poem written by Bismal Azimabadi in 1921, as students marched across the country for their rights.

“We are standing here demanding the right to form student unions, and against the rampant fees hike that is happening. The students unions are about the freedom of expression and critical thinking, which the government fears.” said Arsalam Bhutto of National Students Front (NSF) speaking to Peoples Dispatch. Bhutto added, “The government is spreading lies that unions create violence.”

Their call to mobilization was adopted on a national level, and many more students organizations, trade unions, and civil society members began extending their solidarity with the students march.

A young student, Sahar from Karachi speaking to Peoples Dispatch said that she participated in the march because “private universities keep on increasing their fees and the government is doing nothing but suppressing the voices of students who speak against it.”

The participation in the students’ march on Friday was unprecedented, not only in terms of numbers but the expansiveness. In the most remote corners of Pakistan, university students participated in the Students Solidarity March. Activists report that mobilizations were held in more than 40 cities.

Students across the world have been on the front lines of mobilizations against neoliberalism and the rise of the right. In the capital city of Islamabad, one banner read, “Students of the world unite, you have nothing to lose but debts, loans and privatizations.”

The ban on student unions was imposed in 1984 by Pakistan’s military dictator Zia-Ul-Haq in an attempt to suppress resistance against the dictatorship. Students and workers were in the forefront of struggle against the brutal regime of Zia-Ul-Haq. This ban was briefly lifted in 1988 by prime minister Benazir Bhutto but the Supreme Court re-imposed the ban in 1993. The successive governments have used this ban to repress students’ voices demanding education for all, but today, students are rising up.

One participant in Friday’s mobilization said that to them, student unions are nurseries which equip students with the ability to think critically and to develop opinions. The violence that occurs on campuses is not because of the political activities organized by students, but due to the prominence of regressive ideologies that believes in suppressing critical thinking.

The Student Solidarity Marches across the country paid tribute to Mashal Khan and other students who sacrificed their lives fighting for a progressive Pakistan. On April 13, 2017, Mashal, a 23-year-old leftist student was attacked and brutally killed by a mob of right-wing Islamists inside Abdul Wali Khan University Mardan in Khyber-Pakhtunkhwa province. He was accused of blasphemy after a debate over the religion inside students’ dormitory.

Mashal’s father, Lala Iqbal also joined the march in Lahore to express his solidarity with the students and their cause, and for his son who gave his life for this cause. As his father entered the march, with tears in his eyes, the students began chanting, “Mashal Khan ko laal salam. Mashal tera mission adhura, hum sab milke karenge poora” [Red Salute to Mashal Khan. Mashal, we all will finish the mission you left behind].

The students are demanding April 13, be declared a public holiday as a tribute to Mashal Khan.

Hundreds of people from the education sector, trade unions, professional organizations and members of civil society joined the march calling for ‘Azaadi’ [freedom] from fees hike and privatization.

“We, the students and workers are united against the system of privatization, and we will see how they [elities] will stop our rage,” said Waqar, member of student wing of Mazdoor Kisan Party (MKP) speaking to Peoples Dispatch.

“One day this wave of students and workers will drown the rich and the elites and establish a world of working class and poor,” said Waqae.

The students are also demanding the allocation of at least 5% of the total GDP for education and the end of the militarization of campuses. Pakistan’s intelligence agencies are notoriously known for kidnapping students and activists who express their dissent against the policies of the government and military.

Students note that education in Pakistan has always been for the rich, but the policies of the new government of Imran Khan’s Pakistan Tehreek-e-Insaf (PTI) have exacerbated the situation and higher education is even more inaccessible for the poor. In a budget announced on June 11, 2019, the government imposed a massive cut of 37% to the higher education development budget.

All photos by Khalid Mahmood