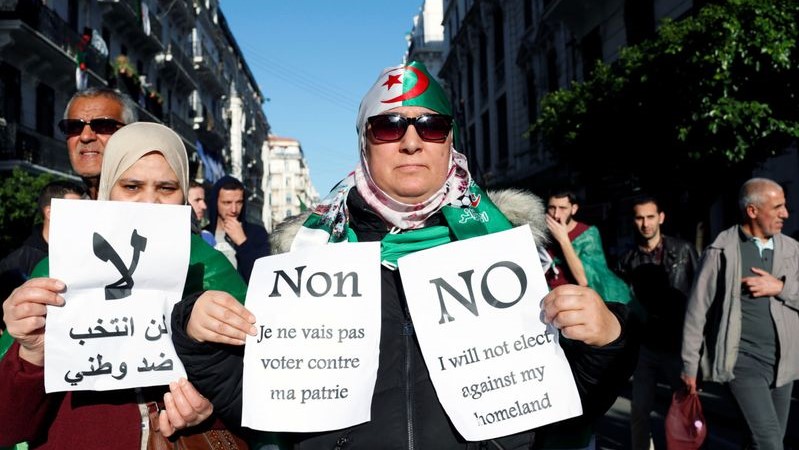 Algerians demand a boycott of the Presidential elections scheduled on December 12. Photo: Reuters

The movement which has been leading weekly protests in Algeria since February this year for greater political reforms in the country has called for a boycott of the upcoming Presidential elections on December 12. It alleges that under the current system no free and fair elections can be held.

Protesters have been demanding a complete overhaul of the political system in the country which continues to be dominated by the military or the loyalists of former president Abdelaziz Bouteflika. Ailing Bouteflika who ruled Algeria for 20 years was forced to abandon his attempts to push for a fifth term in April this year when months of popular protests and army’s refusal to back him forced him to resign on April 2.

Weekly protests have been carried out by the people since then demanding action against the widespread corruption and an overhaul of the political system in the country.

With regards to the upcoming elections, the movement believes that all five of the candidates are close to the establishment. Ali Benflies and Abdelmajid Tebbaoune, who opinion polls project to be the front runners, both served as Prime Minister under Abdelaziz Bouteflika. The other candidates include Azzedine Mihoubi, the head of the Democratic National Rally, former tourism minister Abdelkader Bengrina and Abdelaziz Belaid. The elections were originally planned to be held on July 4 but were postponed due to the lack of credible candidates.

Protesters claim that the army, under the leadership of Ahmed Gaid Salah, is pushing for a political solution to the crisis of governability within the existing system. Both the Army and the National Liberation Front, the party which has ruled the country since 1962, have expressed resolve to hold ‘free and fair’ elections and called the protests against the elections unjustified.

In what many see as a bid to win popular approval, the government has initiated a high-profile corruption case in which several politicians and officials have been brought to court. The government wants severe punishments for all the accused which includes two of the ex-Prime Ministers Ahmed Ouyahia and Abdelmalek Sellal and several other officials from the Bouteflika regime.

Undeterred by the move, hundreds of thousands of protesters turned up to last Friday’s demonstrations across the country denouncing the elections and chanting slogans such as “no to voting” and “no retreat”.

Marches were organized in the coastal towns and cities such as in Algiers, Oran and Constantine.