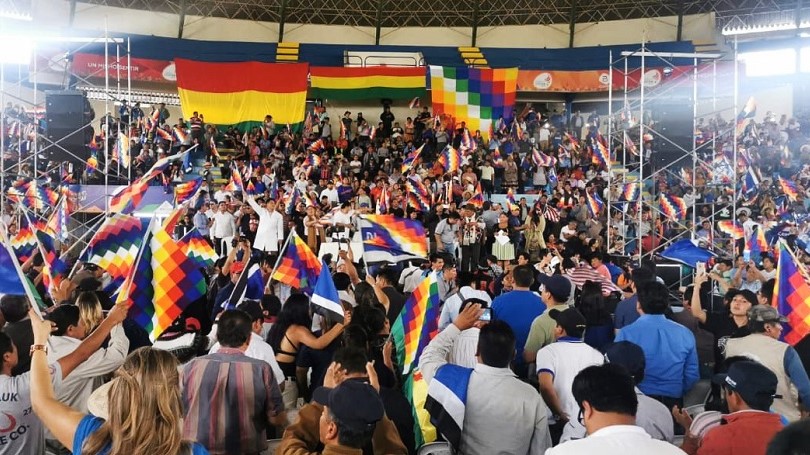 Political leaders, legislators, representatives of various social movements, grassroots organizations and trade unions from all the departments of Bolivia took part in the MAS assembly in Cochabamba on December 8.

On December 7, the Movement Towards Socialism (MAS), the left-wing political party of the ousted Bolivian President Evo Morales, held an assembly in the city of Cochabamba. The central aim was to reorganize the party and popular organizations to take steps to confront the current social and political crisis in the country before the presidential elections in 2020.

They agreed that “the right-wing parties accused the MAS of electoral “fraud” causing confusion with the help of the Organization of American States (OAS), to carry out the coup d’état and submit the Bolivian people to a dictatorship, exempting military and police officials from offense and liability for their genocidal crimes.”

The Assembly also called on international institutions to take concrete action to address the crisis in Bolivia. They specifically called on the United Nations and the Inter-American Commission on Human Rights (IACHR) to “ take responsibility for the impartial investigation into the genocide against humanity” and other crimes committed in the week following the coup.

After extensive deliberation, the participants outlined seven resolutions as a part of their political struggle to recover the government and to combat the socio-political crisis.

One of the central resolutions was “to maintain the unity of all social movements, activists and supporters, leaders and former leaders of social organizations at the national and international level.” The unity is key in order to “to guarantee the victory of the Bolivian people” in the elections that will be held in the first quarter of 2020. Evo Morales was appointed as the campaign leader of the MAS for these elections.

Morales, was in exile in Mexico at the time and has since arrived to Argentina, thanked social movements for trusting him and promised to win the elections again. “I’m grateful for the trust shown by appointing me as a campaign leader. We will choose a unitary candidate and we will win the election in the first round again. Thank you for not abandoning me, I will always be with you all. Together we will continue making history as we have until now. United we will win!,” he tweeted.

Until now, MAS has not nominated anyone to serve as candidate for president and vice-president, although some names have been proposed. Among them are Andrónico Rodríguez, vice president of the Six Federations of the Tropic of Cochabamba; Adriana Salvatierra, former president of the Senate; Luis Arce, former economy minister; José Alberto Gonzales, former president of the Senate, Eduardo Rodríguez Veltzé, former ambassador of Bolivia in Holland and Diego Pary and David Choquehuanca, both former foreign ministers. The MAS formula will be defined in the next assembly, which will be carried out in the city of El Alto in two weeks.

The MAS assembly also resolved to demand that the Plurinational Legislative Assembly initiate a trial against the self-proclaimed president Jeanine Áñez, the interior minister of the de-facto government Arturo Murillo and other government and military officials for genocide, torture, racism, discrimination and other crimes against humanity.

They agreed to create a MAS Human Rights Commission that would follow-up on the cases of selective prosecution and human rights violations during Áñez’s dictatorship. The commission would also defend the freedom of expression of community and intercultural media.

The meeting also agreed to demand that the Plurinational Legislative Assembly accelerate the election process of the members of the Supreme Electoral Court of Bolivia in an impartial and transparent manner, with honest professionals who can guarantee intercultural democracy and clean elections.

It was also resolved that the Pact of Unity (a national alliance of Bolivian grassroots organizations), the Bolivian Workers’ Center and other national organizations should take the decisions, resolutions and proposals decided on in the assembly and organize departmental and regional assemblies of MAS along with social organizations.

Participants promised to give continuity to the process of change with the patriotic agenda for 2025.

They also demanded the immediate approval of the Constitutional Guarantees Act and that the state of emergency is maintained throughout the country.