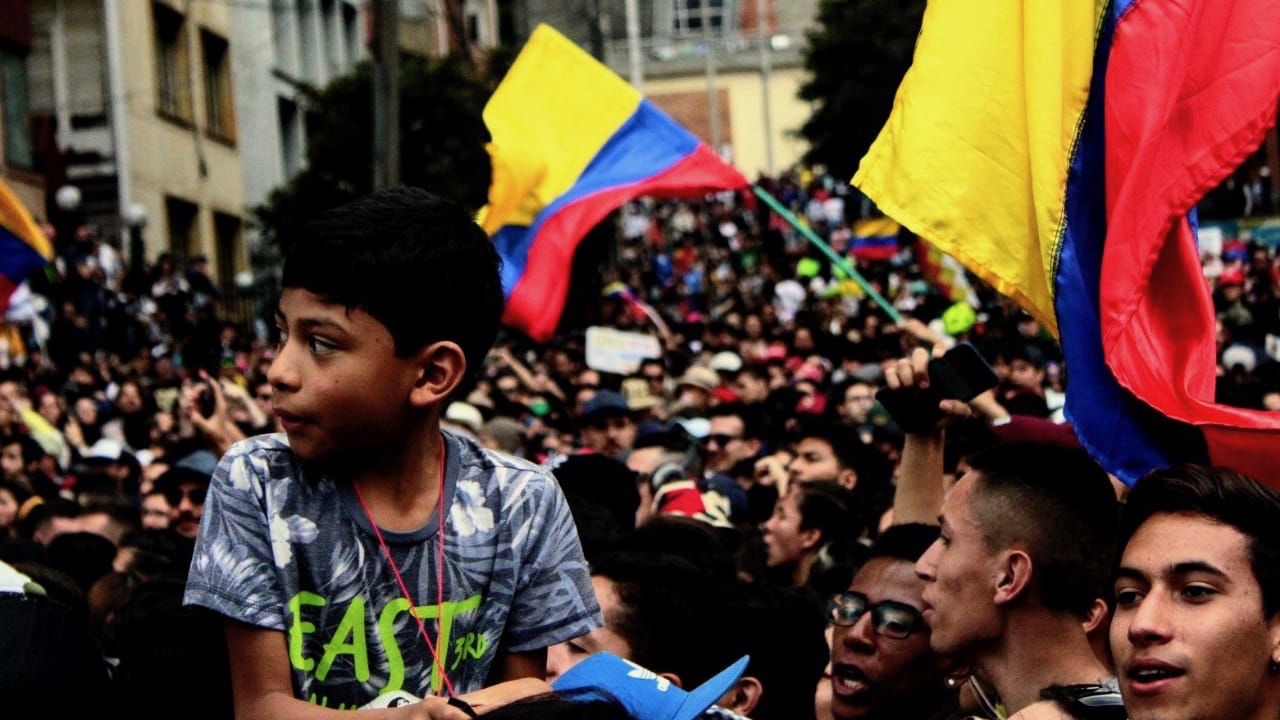 Over 100,000 people participated in the mobilization on December 8 which was called for by artists and cultural workers. Photo: Colombia Informa

Colombia is undergoing a historic moment of social transformation and struggle. Hundreds of thousands of people have joined the uprising against the criminal, neoliberal and repressive government of president Ivan Duque including famous musicians, beauty queens and athletes. In the universities, plazas, and streets of towns, municipalities and cities across Colombia, people from diverse sectors of society are bringing their pots and pans, placards, home-made shields, musical instruments, etc. to raise their voices against Duque’s government and in support of key demands to improve the lives of the Colombian people.

The mobilizations have awakened the consciousness of the people of Colombia who have long suffered under the yoke of neoliberalism and a war-mongering state. Though the police has responded with extreme violence, the more that the Colombian state reveals its deeply repressive nature, the more the support for the mobilization grows.

The small but not insignificant acts of solidarity and care, which have been documented and shared widely thanks to social media, have also been characteristic throughout the strike. The image of a grandmother fiercely hugging a young student in the middle of the street at night, surrounded by two dozen agents of the National Police and the Mobile Anti-Disturbance Squad (ESMAD) who were attempting to arrest the young boy and were unable to due to the woman’s intervention, is one example.

Karen Vanegas Puerta, a lawyer, human rights defender, and member of the youth and urban organization Ciudad en Movimiento and of the human rights team of Congreso de los Pueblos, spoke to Peoples Dispatch about what has been happening in Colombia for the past three weeks and how the social movements evaluate the mobilization.

With regards to the direction and organization of the mobilizations, she said that “After three weeks of strike, what we see is that after the spontaneity of the first days of mobilization, people have begun to coordinate in a much more organized way. This is being done through people’s assemblies in neighborhoods, communities and localities, which has allowed the organizations and people who are not part of organizations to coordinate their actions better in the strike.”

“At the same time,” she added, “cities like Medellín, Bogotá, Popayán, Cali and Bucaramanga continue to have constant mobilizations with participation of students and other sectors who have been organizing cacerolazos, concerts, and even educational activities about the mobilization going on in the country.”

Despite the historic nature of the size and frequenct of the mobilizations, the attempts to enter into dialogue with the government over the list of demands have not been successful. Vanegas explained that “the government has insisted that they will not engage in negotiations unless it is in the context of the National Development Plan.” This, Vanegas, said is antithetical to the demands of the movement because “it is the same plan that has the norms that the mobilization is demanding be repealed, such as the tax reform, labor reform, pension reform. All of these are included in the National Development Plan.”

Among the thirteen demands of the National Strike Committee, Vanegas highlighted four which are of particular relevance for the social movements in Colombia. They include the demand to dismantle the ESMAD in order to guarantee the right to social protest. The demand to guarantee the protection to life and the right to social protest, which necessarily means an end to the genocide and persecution of social leaders and human rights defenders. They also call for the government to show commitment to true peace in Colombia by following through with the implementation of the Havana accords and the restoration of the dialogues with the National Liberation Army.

State repression of social protest is not new in Colombia, but the intensity and brutality of the repression, coupled with the discourse of authorities that not only justifies the repression but criminalizes and stigmatizes those on the streets has shaken people. Vanegas, along with other human rights defenders of the Human Rights Commission of Congreso de los Pueblos, has been monitoring the abuses and violations committed by the Public Force as well as receiving testimonies of victims said that repression has been constant in response to the mobilizations irregardless of the type of protest.

On December 10, police and ESMAD personnel violently attacked students protesting at the National University of Colombia with tear gas, batons, and unconventional weapons, similar to the weapon that killed Dilan Cruz. ESMAD agents attacked with particular force the students who were organized in “the first line,” an initiative to create a first line of defense against police attacks and have a line of protesters with shields and gas masks.

The attacks continued for hours and at night, human rights organizations and alternative media began to sound the alarms that two students had been kidnapped by police agents and were taken away in unmarked cars. In the case of the female student who was kidnapped, people nearby followed the car, filmed the incident and managed to free her.

According to the Human Rights commission, 400 people have been injured, 1,000 people have been detained in the context of the mobilizations and 30 are still facing cases. In Colombia, the police has the ability to “retain” people, which is when you are temporarily detained in a special detention center for up to 12 hours (in theory) without charges pressed against you. Vanegas said that in addition to the police using this practice to generate fear, many have denounced that during these temporary detentions, they are subjected to “physical, psychological torture including threats of sexual violence”.

Vanegas stated that “this practice, to use the judicial apparatus as a way to repress or to intimidate the social protest, is continuously used by the Colombian government. They try to frighten, stigmatize, and above all try to demobilize those that have been in the streets and in the neighborhoods, alongside diverse sectors in this national strike.”

From December 6 to 7, the National, Trade Union, Social, Ethnic and Popular Encounter was held at the National University in Bogotá. A number of organizations that have been active in promoting and organizing the strikes and mobilizations over the past three weeks took part. The encounter, organized by the National Strike Committee, had the central objectives to forging unity among the different organizations participating in the mobilizations, amplifying the list of demands and the agenda of the struggle for peace and life, and creating a roadmap for the continuity of mobilizations.

In addition to reiterating and highlighting the demands of the strike to reflect the spirit of the people on the streets and the diversity the organizations, participants also analyzed and denounced the response of the government to the mobilizations. In the final declaration, it stated that the regime led by Iván Duque “deepens its anti-people and anti-democratic offensive, giving a war-like treatment to the social protest” while at the same time, it “recomposes its political oligarchic alliance with all of the right-wing parties in Congress to impose the tax, labor and pension reform, as well as to continue with the privatization of state companies and common resources.”