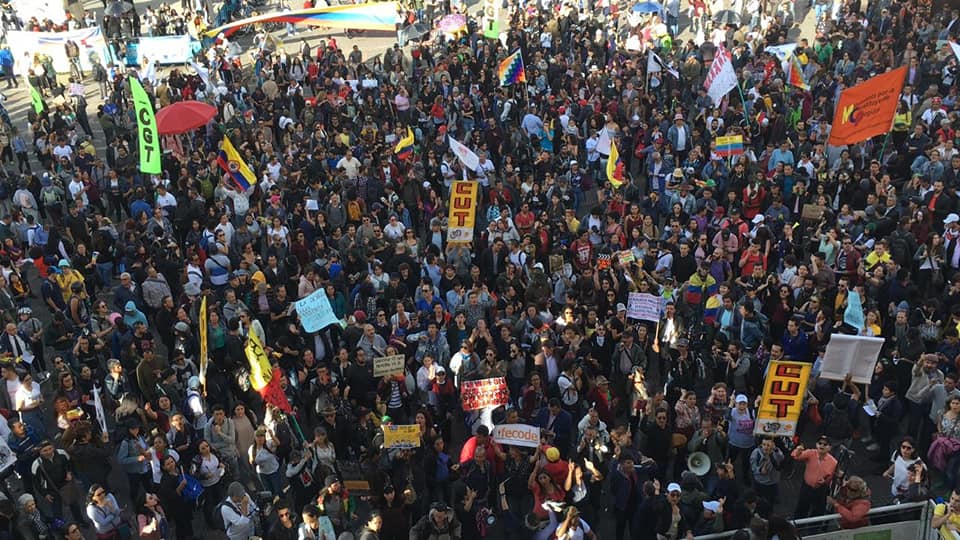 Thousands of citizens peacefully demonstrated at the Plaza Bolivar, outside the National Congress, in Bogotá, on December 16. Photo: Congreso de los Pueblos

On December 16, protests, demonstrations and cacerolazos were held across Colombia to reject a tax reform that the right-wing government of President Iván Duque aims to approve before the end of this year.

The tax reform, known as the Economic Growth Law, gives huge benefits to the corporate sector and completely overlooks the majority of Colombian working class. It offers a tax exemption of up to 20 billion Colombian pesos (5.9 million US dollars) to big businessmen and large companies. The reform is a part of what the social movements call as “Duque’s neoliberal package”.

In the capital, Bogotá, which was the epicenter of the protests, thousands of citizens and members of several social movements and trade unions, gathered at the Plaza Bolivar and peacefully demonstrated, banging utensils, displaying anti-government placards and singing revolutionary songs. Similar demonstrations were replicated simultaneously in all parks and plazas throughout the country.

Left-wing political leaders and legislators from the Common Alternative Revolutionary Force (FARC), Alternative Democratic Pole, Patriotic Union and Colombia Humana, among others, joined the people at the Plaza Bolivar in cacerolazo, a kind of protest in which people bang pots, pans and other utensils to express their discontent.

In the city of Cali, students, workers and citizens who were peacefully protesting on a public road against the tax reform were attacked by the Mobile Anti-Disturbance Squadron (ESMAD) with sound grenades and tear gas. During the repression, police arrested 16 people, of which 7 were brought by force to the Attorney General’s office, including 2 people who were on their way to work and not participating in the protest. Magaly Pino, a member of the National Agrarian Coordinator and Congreso de los Pueblos, was carrying out human rights monitoring of the protest and was brutally attacked by the police and brought to the Attorney General’s office.

While demonstrations carried on against the Tax Reform, just a few blocks away at National Congress, the House of Representatives approved the reform with 89 votes in favor and 48 against. It will now be debated and voted on in the Senate in a special session between December 17 and 20.

The national protests against the tax reform was called for by the National Strike Committee. It is a platform that brings together dozens of trade unions and peoples’ organizations, which have been on strike since November 21 and have been continuously mobilizing throughout the country against the anti-people, neoliberal and repressive regime of Duque.

The National Strike Committee denounced that the tax reform favors the rich people and big companies and thus, intensifies the social inequality facing the country. It deemed it as the “Economic Stagnation Law”. “It should be noted that these laws only serve the interests of the financial sectors, large capitalist enterprises, ignoring the middle class and the popular sectors,” said the National Strike Committee in an official statement. In the same statement, the Committee ratified that the national strike, which is in its fourth week, would continue until January 31, 2020.

The Central Union of Workers (CUT), the Colombian Federation of Education Workers, among other trade unions, also rejected the reform.

A day before the national protests, on December 15, various social movements, organizations and trade unions ran a campaign on Twitter and called on the people to reject the reform using the hashtag #16DTumbarLaTributariaDeDuque (#16DTakeDownDuque’sTaxReform).

On December 12, the day the bill was presented in the National Congress, mobilizations rejecting the tax reform were carried out throughout the country.

Protests have been intensified following the failure of the latest negotiation meeting with the government on December 13, in which the government refused to get engaged in a national dialogue with popular sectors to address their 13 point charter of demands and to implement public policies for the benefit of a great majority of Colombian population.

The 13 point charter of demands includes the immediate dissolution of the special police unit, the Mobile Anti-Disturbances Squadron (ESMAD); the implementation of effective measures to stop the genocide of social, peasant and Indigenous leaders; the compliance of the peace agreements with the Revolutionary Armed Forces of Colombia (FARC), signed in 2016 in Havana, Cuba; the re-initiation of peace talks with the revolutionary left-wing armed group, the National Liberation Army (ELN); among others.