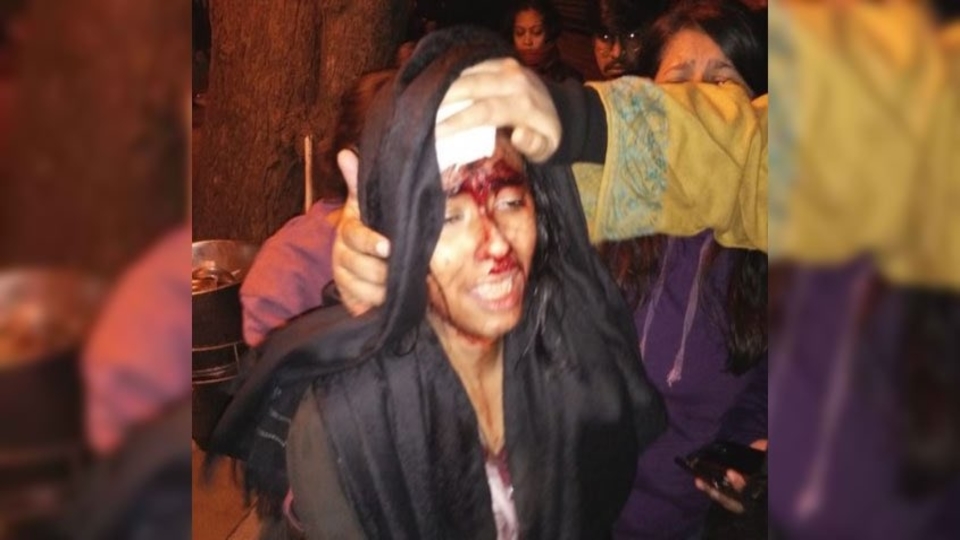 Armed goons, allegedly belonging to the far-right-wing Akhil Bharatiya Vidyarthi Parishad, went on a rampage inside the campus of Jawaharlal Nehru University (JNU) in New Delhi, India, on January 5, Sunday.

The JNUSU President was singled out and hit on her head by men who entered the university campus with the blessing of the guards, the administration and the Police. We need help. JNU is under attack. Indian Students are under attack. #SOSJNU #EmergencyinJNU https://t.co/HV6oesKMMn

Activists of left-wing students’ organizations, including SFI and AISA, were specifically targeted, as were faculty who were part of a meeting appealing for peace.

The students and faculty of the university have been involved in a months-long protest against fee hikes and have also been in the forefront of protests against the far-right Narendra Modi government’s divisive Citizenship Amendment Act (CAA).

The students and citizens of Delhi are gathering at various places in protest. A huge crowd has gathered at the headquarters of the Delhi police.

Wielding batons and rods, the masked goons have been on campus since the morning. In the evening, they went on a full-fledged rampage, attacking students, barging into hostels and vandalizing rooms.

The All India Institute of Medical Sciences reported that at least 20 students were admitted with injuries. Throughout this violence, the Delhi police was nowhere on the scene and did not take any action against the protesters. The JNUSU has alleged that the police and a section of professors are complicit in the violence.

It was only in the aftermath of the attacks that the police entered the campus, claiming that they were waiting for a request by the administration. Many hostels inside the campus have been vandalized, with doors shattered and students’ belongings strewn across rooms.

Sabarmati Hostel: right now. They are beating the students who are inside. Knocking on doors with rods. People are jumping from balconies. #SOSJNU #EmergencyinJNU pic.twitter.com/kWEsQaZ5gE

Room of a Kashmiri student residing at Sabarmati Hostel, JNU. Of all the rooms in the wing, this one was specifically targeted by right wing thugs. #SOSJNU#standwithjnu pic.twitter.com/SCuDylREAo

Left and opposition parties in India strongly condemned the incident. Communist Party of India (Marxist) Polibureau member Brinda Karat said that this was a clear bid by the far-right government was going all out to break the struggle of the students against fee hike.

Comrade Brinda Karat, after meeting students who have been hospitalised after brutal assault in JNU. She confurmed that the students are being treated.https://t.co/MKySNHtckN

We condemn the ghastly attack on JNU students and teachers inside the JNU campus where many have seriously injured. How was it possible that masked goons entered into JNU and launched murderous attacks while Police is posted right at that spot? https://t.co/mKkgllXfjG