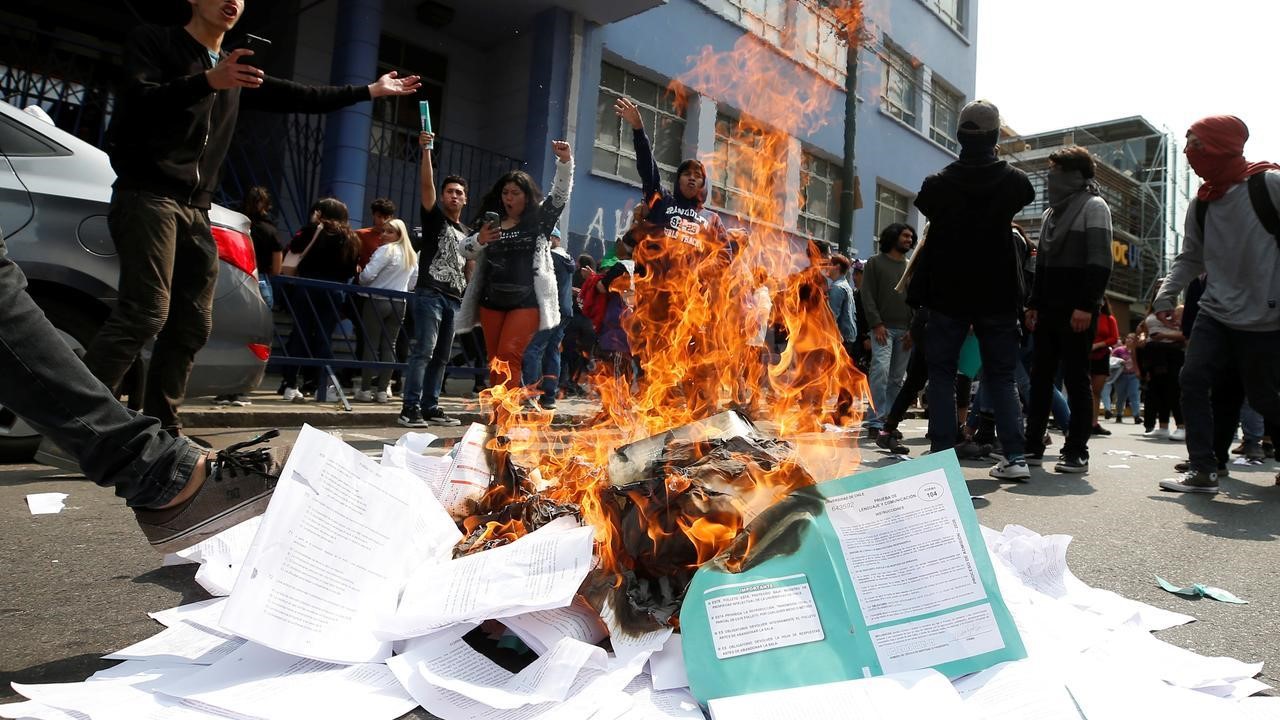 On January 6, hundreds of young students demonstrated outside several examination centers throughout the country and burned exam papers in an act of resistance. Photo: Reuters

In Chile, the week began with student protests. On January 6 & 7, high school students demonstrated across the country against the University Selection Test or PSU, a standardized national entrance exam for admission to the country’s universities. Student organizations such as the Coordinating Assembly of High-School Students (ACES) and the National Coordinator of High-School Students (CONES), which gave the call for mobilizations, claim that the PSU is discriminatory and deepens inequalities in the education sector.

On January 6, hundreds of young students demonstrated outside several examination centers throughout the country, including the capital Santiago, port-city Valparaíso and the cities of Calama, Concepción, Puerto Montt, Quilpue, San Pedro de la Paz, Villa Alemana, etc. In some places, students blocked access to the exam centers, prevented the entry of enrolled students, disrupted the exam by shouting and making noise, and burned exam papers in an act of resistance.

In many cities, students were violently repressed by the security forces. The police official brutally beat up students and forcibly arrested them. The Interior Ministry reported that 81 people were arrested nationwide for disorders and damage.

Students’ resistance led the university authorities to suspend the examination in 64 exam centers across the country, where protesters prevented its implementation or successful completion. The Department of Educational Evaluation, Measurement and Registration (DEMRE) of the University of Chile announced the suspension of both the exams, the Language and Communication exam conducted in the morning, the Science exam scheduled for the afternoon as well as the History, Geography and Social Science exam scheduled for the next day, in these 64 centers citing the safety of applicants, staff and exam materials.

Later during the day, the Council of Rectors of Chilean Universities (CRUCh) announced the nationwide suspension of the History, Geography and Social Science exam scheduled for January 7. The CRUCh in a statement said that the decision had been taken due to an eventual leak of questionnaire on social networks.

However, despite the suspension of exam, the students continued their mobilizations on January 7, demanding a structural transformation of the Chilean education system that makes it more inclusive.

The PSU admission examination has been used in Chile since 2003. It replaced the Academic Aptitude Test (PAA) which had been in use since 1966. The PSU consists of four sections: a) Language and Communication, b) Mathematics, c) History, Geography, and Social Sciences, and d) Science (Biology, Physics, Chemistry and Professional Technical Skills). The Language and Communication test and the Mathematics test are mandatory. While the students can select any one of the other two tests.

This year, around 300,000 students enrolled for the PSU, which was conducted in about 700 exam centers across Chile. However, due to the protests, about 10% of the students did not take the PSU.

Protesters claim that the current admission system privileges those who attend better schools, in better areas and have better resources to prepare for it and discriminates against a large majority of students who can’t afford higher quality education.

“We will continue to fight against privatized education system and for a country where poor and working-class children can study without competition or segregation,” said the ACES in a tweet.

The president of the national teachers’ union, Colegio de los Profesores de Chile, Mario Aguilar also supported the students’ claim. “The claim and the underlying theme both are valid. This is an absolutely segregating and classist test,” said Aguilar.

Likewise, the president of the Communist Youth of Chile (JJCC), Camilo Sánchez, declared his support for student protests. Sanchéz criticized the exam and said that the score resulting from this evaluation does not measure the ability to study a profession, but rather contributes to reserving some careers and universities for students with greater resources, thus excluding a large majority of the poor people.

The secondary students’ protest occurs in the context of a popular uprising in Chile, which will complete three months this January 18. The people of Chile have been mobilizing demanding a new constitution through a National Constituent Assembly and an end to the abusive neoliberal model enforced since the last civic-military dictatorship of General Augusto Pinochet.

This social outbreak was sparked by a high school students’ protest against the increase in the cost of public transportation services in the capital. In October 2019, high school students began refusing to buy metro tickets en masse and jumped the turnstiles to protest the hike. The resistance led by the Chilean youth served as the catalyst for the awakening the long standing discontent in the country. 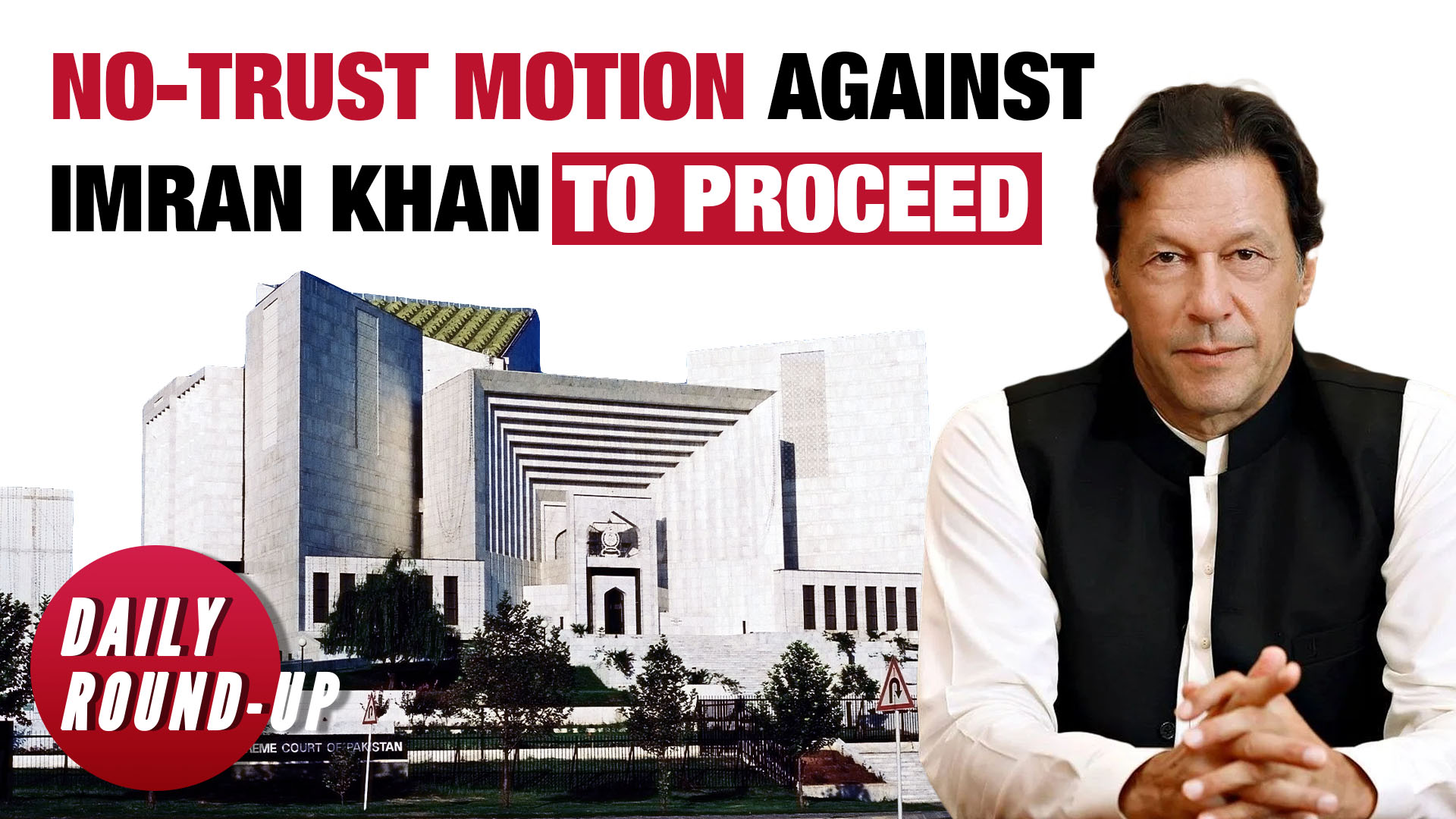