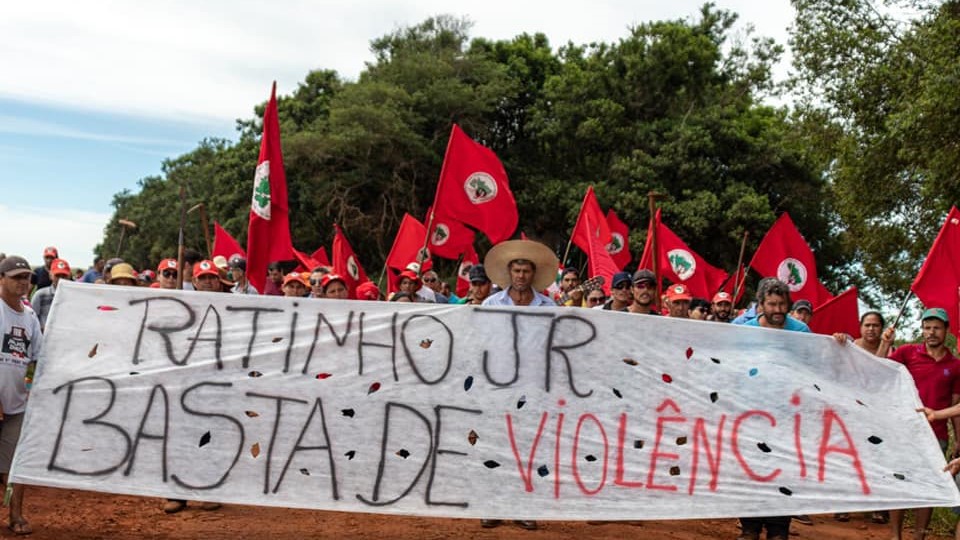 Hundreds of landless rural workers are participating in the “Peasant Resistance Vigil: for land, life and dignity” in Cascavel in the southern Brazilian state of Paraná. The vigil, which began on December 28, 2019, is in defense of the land where over 200 landless families live and produce, and where the State governor Ratinho Junior has authorized evictions.

The vigil, located by the BR 277 highway at km 557, is inspired by the Free Lula vigil that militants of the MST and other social movements in Brazil maintained for the 580 days of his imprisonment. The Peasant Resistance Vigil seeks to evoke the same spirit of permanent solidarity and resistance. Every day, from 10 am-3 pm, a mobilization is carried out and throughout the past two weeks, participants have held cultural activities, organized community lunches, barbecues, religious activities and political education activities.

The vigil is opposing the eviction notices that were authorized by Ratinho Junior against the three MST camps – Resistência Camponesa (Peasant Resistance), Dorcelina Folador and 1º de Agosto. These camps are home to 213 families (around 800 people, 250 of whom are children and 80 are elders). The camps are located on the Cajati farms in the municipality of Cascavel.

Angela Lisboa Gonçalves, who is a member of the board of the Resistência Camponesa camp, stated “Here is where we produce life and food. It is where we work. If they take away our land, it is not just our home they take away but also our work and our dignified life.”

Participants in the camp have also highlighted the impact of the evictions on the children. Vera Lucia Marcondes, a teacher at the Municipal School Zumbi dos Palmares located on the Valmir Mota Settlement, also in Cascavel, stated, “In addition to the children losing their homes,, they also lose their place to play, their toys and their pets.” She added, “They will also lose their school, their friends that studied with them, they do not know where they will study.”

According to Marcondes, two-thirds of the students at the Zumbi dos Palmares School are from communities that are threatened with eviction orders. If they are carried out, the whole school community will suffer.

Local religious and political leaders have also lent their support to the vigil. Luiz Carlos Gabas, of the Episcopal Anglican Church of Brazil participated in a mobilization and declared, “We appeal to the governor Ratinho and to the State government so that they pay attention to the lives of our brothers and sisters, and give these families in the camps the right to access land. Agrarian reform is necessary and should happen. The government should not give privileges to the rich. It has to look out for the poor people who live in this State.”

Historian and city council member in Cascavel from the Communist Party of Brazil, Paulo Porto (PCdoB), spoke at the vigil, “Today you are organizing to demand an end to the violence from the government of Ratinho Junior that unfortunately follows the same logic of the government of Bolsonaro at a federal level. 500 families have already been evicted [in the State] and the struggle now is that not one more [be evicted]. I came here to lend support and tell you that you are not alone.”

The organizers of the vigil have stated that the action will only end when the evictions are suspended and the state continues the process of expropriating the land and designating it for agrarian reform.

While the demands of the vigil are specific to the camps in Cascavel, the organizers also seek to draw attention to and denounce the situation faced by landless families across the State that has dramatically worsened under the presidency of Jair Bolsonaro and governor Ratinho Junior.

Ratinho Junior, son of Brazilian multimillionaire Ratinho, has time and again demonstrated his close allegiance to large rural landowners. From May to December 2019, he authorized nine evictions of land occupations. According to the MST, around 500 families in the State have had their houses and agricultural production destroyed. These violent evictions have occurred without any possibility of dialogue with the police.

The organization also reported that since the beginning of the mandate of Ratinho Junior, communities in camps have denounced the presence of planes and drones passing overhead, the use of rubber bullets and sound grenades. The increase in violence and the illegal evictions has shaken the nearly 7,000 families that live in the 80 occupations in Paraná. The MST highlighted that all of these occupations are on land that has been declared unproductive, areas confiscated from drug traffickers, denounced for using slave labor, or from tax evaders.

The trend seen in Paraná with regard to the violent treatment of the occupations of landless families and workers is reflected on a national level. Since Jair Bolsonaro took office in January 2019, the number of eviction notices has increased. Federal and State governments have created legal roadblocks to impede the advancement of agrarian reform, all while the Ruralistas – the large landowning lobby – and the agro-industrial sector have received benefits and encouragement. In practice, land redistribution has been halted and landless workers have been confronted with an increasingly violent and hostile attitude.

All this takes place in a country where a mere 3% of the population owns two-thirds of the arable land due to the failure of agrarian reform.

The MST has been fighting for agrarian reform since its founding in 1984. The movement organizes landless families to occupy land that does not meet its social function so that they can have the opportunity to build homes and engage in production.

Once the land is occupied by landless families and they build homes, schools and churches, and organize agricultural production for their subsistence and for distribution, these are called camps. They then demand that the government, in accordance with the Constitution of 1988*, expropriate this land, usually owned by large agro-industry companies, large landowners, or rich individuals. If the government does this and the land is made public, it can be designated for agrarian reform and established as settlements.

However, before camps are legally recognized as settlements, they remain vulnerable to diverse types of violence. The threat of eviction by the police is constant for camps that have existed for a month and even for camps that have existed for decades, like in Cascavel, where families have built houses, schools and developed agricultural production. Many camps also suffer threats, intimidation and attacks from private security forces or militias who are contracted by the landowners to drive them off the land.

The brazen and violent statements of Bolsonaro against the MST have further encouraged this type of violence against landless workers who are simply trying to have access to land to work, survive, live and produce on. Despite the worrying shift to the far-right in Brazil, the MST continues to exist and demand that the State guarantee minimum conditions so that all in Brazil have access to a dignified life.

Adair Gonçalves, a member of the State board of the MST in Paraná, explained that the “Peasant Resistance Vigil: for land, life and dignity” is about denouncing injustice committed by the State, “This is a very difficult moment for the entire working class, and that is why it is the moment to do a permanent vigil. It is the way to make this resistance a daily and collective process, that helps to increase our hope.”

(*) The Brazilian Constitution passed in 1988 outlines that the state must expropriate land that does not meet its social function which is defined as rational and adequate use, adequate use of available natural resources and preservation of the environment, observation of labor laws, and production that favors the well-being of the owners and workers.