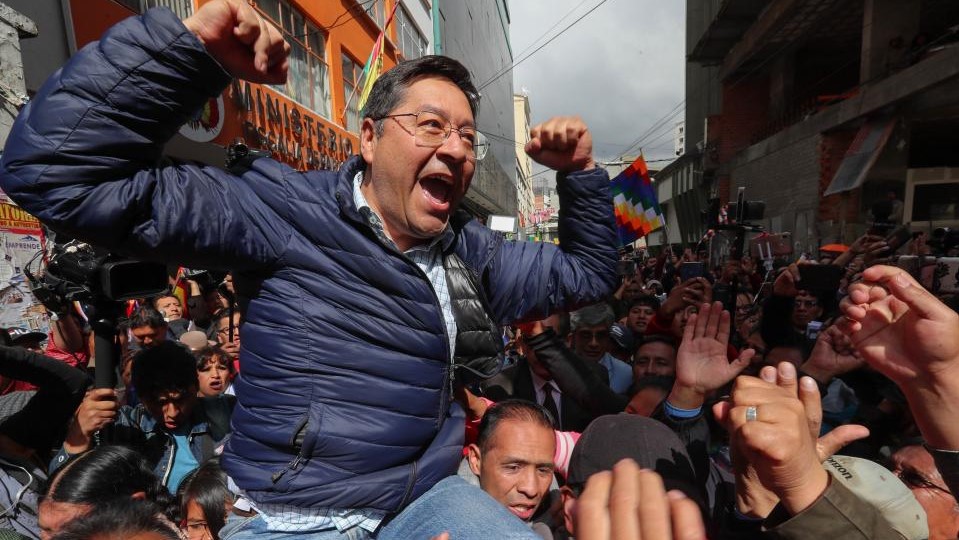 Upon leaving the Attorney General’s Office, Arce was received by hundreds of MAS supporters who shouted slogans in support of his presidential candidacy. Photo: Página 12

Bolivia’s coup regime led by far-right, Jeanine Áñez, filed a corruption case against the presidential candidate of the Movement Towards Socialism (MAS), Luis Arce on January 21. The interim government accused Arce of alleged embezzlement of the Indigenous People and Farmers’ Development Fund (FONDIOC) in 2015, when he was serving as Bolivia’s Minister of Economy and Finance.

Upon leaving the Attorney General’s Office, Arce said that he had nothing to do with the facts that prosecutors are investigating. “I am a transparent man, I came to testify because I have nothing to hide. I am not corrupt,” said Acre, surrounded by hundreds of MAS supporters who shouted slogans in support of his presidential candidacy. “This is eminently political against our MAS-IPSP candidacy and we are going to confront this for justice,” he added. The former economic minister reiterated that he could have never diverted funds because he did not manage those funds.

On January 24, Arce denounced that the de-facto government was trying to impede his participation in the upcoming general elections on May 3 as the legal procedure began immediately after he was announced as the presidential candidate on January 19.

Acre left Bolivia on December 6, 2019, amid an escalation of threats and intimidation to government functionaries, members of the MAS and their family members, following the civic-military coup against the constitutional government of MAS, led by Evo Morales and Álvaro García Linera on November 10. He left the country with the support of the embassies of Mexico, Uruguay and Argentina and sought political asylum in Argentina.

He came back to Bolivia on January 28, a day before the trial, to begin his election campaign. At the airport in the city of El Alto, he was received by his running mate, David Choquehuanca, and a large group of other MAS leaders and supporters with dozens of Wiphala flags (Indigenous flags) and slogans cheering for their ticket.

Arce was asked to appear for the FONDIOC case investigation while he was still at the airport. An officer from the Attorney General’s office gave him a notification soliciting his appearance on January 29 to provide information on the case.

The persecution of MAS functionaries and social leaders is nothing new under the dictatorship of Jeanine Áñez. After the right-wing coup, the MAS deputies and ministers, who sought refuge in the Mexican embassy located in La Paz, were intimidated by an increased military presence and arrest warrants were issued for five MAS ministers. A warrant has even been issued for former Bolivian President Evo Morales accusing him of sedition, terrorism and financing of terrorism. The abrupt corruption case against Arce is a step further in the same line.