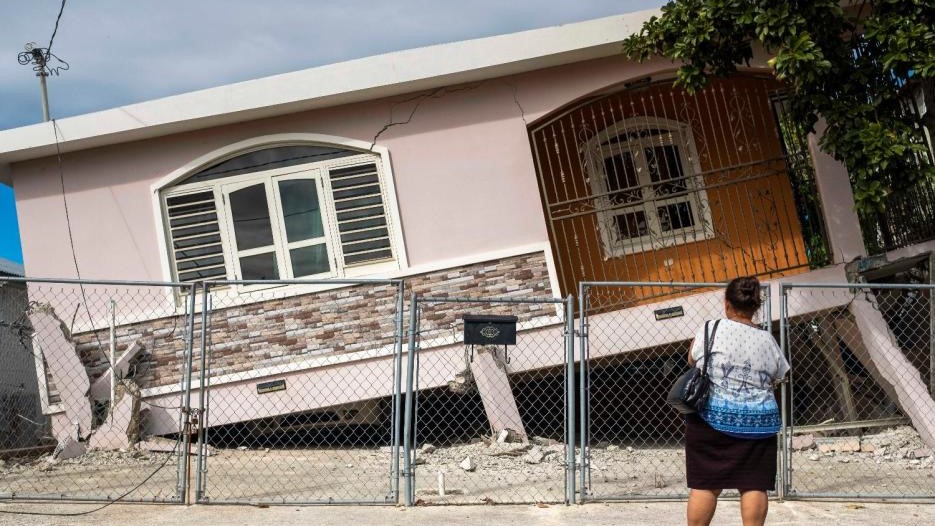 Hundreds of homes were destroyed in the series of earthquakes that hit the South of Puerto Rico during the first week of January. Photo: Ricardo Ardurengo/AFP via Getty Images

Thousands of people have taken to the streets of Puerto Rico over the past couple of weeks. The protests took place amid mounting public anger in the aftermath of the earthquakes in the south of the island in the last days of December 2019 and into the first week of January. The strongest quake on January 7 was of 6.4 magnitude. As a result, over 8,000 people from Ponce (the island’s second largest city), Yauco, Peñuelas, Guánica, and Guayanilla were displaced and are living in outdoor shelters. Hundreds of homes and buildings have been destroyed and thousands are still without electricity and water.

The response from the government was weak and slow. The people quickly mobilized to buy emergency supplies, organize community kitchens, help create makeshift shelters and open their doors to those in need – an outpouring of human solidarity in the face of state abandonment.

Amid the ruin following the earthquake and the tremendous suffering of the communities in the south, residents in Ponce discovered a warehouse full of emergency supplies such as water bottles, diapers, food, propane gas and beds that were intended for Hurricane María relief but were never distributed. The rightfully angry residents recorded videos of the discovery which were circulated widely on social media and mobilized many to take to the streets in indignation. Protesters also have clear demands that the local authorities and the federal government take more serious measures to protect the people of Puerto Rico and that governor Wanda Vazquéz and others involved in corruption and mismanagement resign.

The Puerto Rican local administration has yet to give a clear answer or explanation as to why the supplies were sitting in the warehouse unused. The director of Emergency Services Carlos Acevedo was fired and the government promised to write up a report of what happened with the supplies, which has yet to be published. Whatever the official explanation is, the people know what the impact has been and it is just one more example of state abandonment and negligence in a crisis situation which has exacerbated the suffering of the people instead of alleviating it.

Marisel Robles Gutiérrez of Social Cafeterias of Puerto Rico (Comedores Sociales de Puerto Rico), an organization that emerged in response to the economic crisis on the island to distribute food and resources to the people by the people, explained some of the different factors at play in the latest social outburst.

“The whole question of the supplies was one of the central motivating factors to bring people to the streets because these supplies have been there since María. These supplies were for the people of María that died,” Robles Gutiérrez explained, referring to the more than 4,500 people who died during the hurricane and in its aftermath.

She also pointed out that due to the government withholding supplies and aid following the January earthquakes, the people who mobilized to support the southern communities were forced to “buy these same supplies in the transnational supermarket distributors like Walmart and other companies that have profited enormously with the crisis.”

The (lack of) distribution of supplies was just one aspect of the “terrible” government response. One of the central questions that remains is with regard to people’s homes. The earthquake destroyed hundreds of homes and left thousands uninhabitable and unstable. Yet, weeks later “There are no responses about the homes of the people,” Robles Gutiérrez explains, “but the majority are uninhabitable. What they are doing is marking them with an X written with spray paint, saying here is uninhabitable and they give you 24 hours to leave but they do not give you a response of where to.”

Thousands of people have been forced to take refuge in makeshift camps while they await a possible solution from the government. The camps have “extremely undignified conditions” which have affected the overall physical and mental health of the people staying there.

To put salt in the wound, while thousands remain homeless, suffering in overcrowded makeshift refuges that lack sanitary conditions, Puerto Rican politicians have made statements to the press stating that “people are content to be in tents, to be living in these conditions, to be wet all the time, eating military food,” Robles Gutiérrez said, “and we do not know and we do not understand if they are joking.”

For organizers like Robles Gutiérrez who have been mobilizing against the corruption and mismanagement of Puerto Rico for years, the government’s response to the latest disaster reflects their overall administration of the economy and political life of the island which places the interests of foreign capital over the survival of the people.

One key demand with regard to housing for disaster victims is for the administration to use the nearly 300,000 houses that have been repossessed by banks, as well as the municipal housing projects across the island which have vacancies, as a solution to the thousands of displaced people whose homes have been destroyed.

However, the organizer explains, “None of these options have been given because there are interests in that the majority of these people that can leave, leave again, just like what happened with María. [They want] them to go into exile in the United States, and those who cannot, well they receive their limited aid and the question of housing usually isn’t solved. The same with the camps, they want people to get tired of the camps and for them to look for their family members and they put them up in their homes, which of course already happens but it is not sufficient enough of a response.”

The gradual erosion of conditions on the island due to both the frequent ‘natural’ disasters and neoliberal economic policies have driven hundreds of thousands off the island. A study by the Center for Puerto Rican Studies at Hunter College CUNY, estimated that over 135,000 people migrated to the United States from Puerto Rico in the six months following Hurricane María. This number represents 4% of the population which has now dropped to 3.2 million.

For Robles Gutiérrez, this exodus is intentional, “Their goal is to empty the area. The southern area is going to be completely emptied, increasing the possibility that speculation occurs with the land, that this land is sold, and then for the area to simply be energy projects. They are doing everything to assure this result and the foreign investors are the ones who have gotten off best in this process,” she stated.

In 2016, the PROMESA Law (Puerto Rico Oversight, Management, and Economic Stability Act) authorized the creation of a Fiscal Control Board by the US Congress in order to deal with the ‘debt crisis’. The Board has the power to make crucial decisions about the Island’s debt and budget which until now has closed hundreds of schools, slashed pensions, privatized state enterprises and implemented other anti-people neoliberal economic measures which have eroded the rights of the people and the guarantees to basic necessities for survival.

Yet, despite facing the most aggressive impacts of climate change, colonialism and neoliberal economic policies, the people continue to organize, to provide what they can for their community with whatever they have, and to demand that those responsible for their suffering leave office. In July, their impressive mobilizing led to the resignation of then Governor Ricardo Rosselló and increased awareness across the world about the critical situation in Puerto Rico.