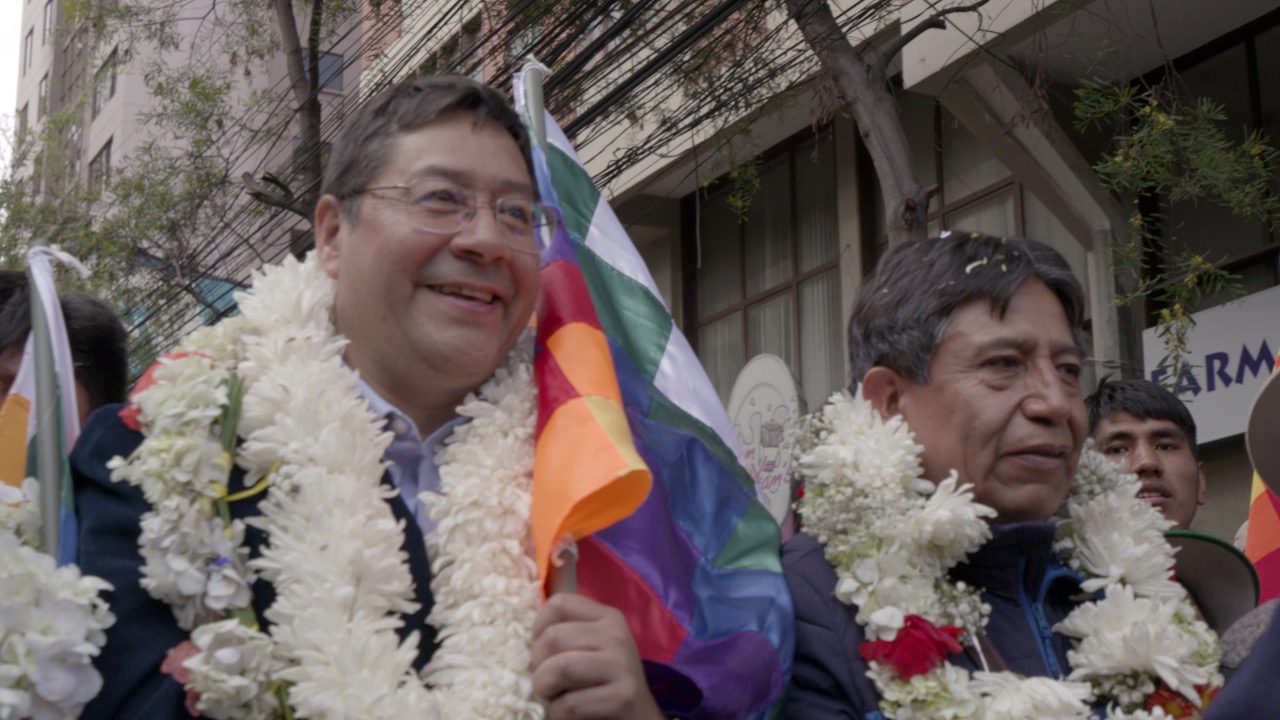 On February 3, the presidential candidate of the Movement Towards Socialism (MAS), Luis Arce, and his running mate, David Choquehuanca, registered their candidacy at the office of the Supreme Electoral Court (TSE) for the general elections on May 3 in Bolivia. Despite the constant political persecution by the coup regime, led by far-right, Jeanine Áñez, the leftist party MAS, led by former President Evo Morales, presented the list of its candidates for president, vice-president, senators and deputies and successfully filed their nomination.

The MAS candidates, Arce and Choquehuanca, arrived at the office of the TSE accompanied by a massive crowd of the MAS leaders, supporters and social movements, who marched with them from the San Francisco Plaza to the electoral office.

“We have the people on our side, we are the only party, the only political option that represents the interests of the poorest people, of the indigenous brothers, peasants, of the impoverished middle class, which has been increasingly impoverished by this de-facto government. There are many people who are suffering, not only because of the limitation in political participation, but also in the economy. We have the support of the majority of the people,” said Arce, minutes after filing his nomination, manifesting his confidence in the people of Bolivia.

Arce also sharply criticized the de-facto government for its hostile actions against the MAS functionaries to prevent their participation in the elections. Referring to the recent incident of harassment and attempted arrest of the legal representative of President Morales, Patricia Hermosa, and his lawyer, Wilfredo Chávez, Arce said that “we denounce the harassment that our delegates suffer before the Electoral Court, another trick of the de-facto government that does not want us to take part in the elections.”

Hermosa and Chávez came to the TSE with all the necessary documents to register former President Morales as a candidate for the Plurinational Legislative Assembly. However they were stopped from doing so and became the new victims of the harassment and political persecution of the dictatorial government of Áñez. Hermosa, who was carrying the power of attorney by President Morales and a military service notebook, was arrested by the police and sentenced to six months preventive detention the same day. Chávez, who couldn’t be arrested with Hermosa, had taken refuge at the Argentine embassy in La Paz, Bolivia.

President Morales condemned Hermosa’s arrest on twitter and denounced the lack of evidence to carry out the arrest. “Justice in Bolivia is subordinated to the dictatorship. In a completely illegal way, they send my representative Patricia Hermosa to prison; without any evidence or legal basis they deprive former public servants of their freedom,” Morales wrote.

The persecution of the former government members happened over the weekend as well. On February 1, the former Mining Minister Cesar Navarro and former Agriculture Minister Pedro Dorado were arbitrary arrested at the El Alto airport when they were about to board a plane to Mexico to seek political asylum in that country. The officials were granted a safe-conduct which allowed their free departure from the country, despite that, the Interior Ministry arrested them disrespecting the safe-conduct granted by its government. After spending hours in detention and the public apologies of the interim government, both officials were released and they managed to reach Mexico.

Last month, the de-facto government tried to impede Arce’s participation in the upcoming elections by filing a false corruption case against him.

Since the civic-military coup against the constitutional president Evo Morales on November 10, selective persecution of MAS functionaries and social leaders has become normal practice on part of the coup-born government. After the right-wing coup, the MAS deputies and ministers, who sought refuge in the Mexican embassy located in La Paz, were intimidated by an increased military presence and arrest warrants were issued for five MAS ministers. A warrant has even been issued for former Bolivian President Evo Morales accusing him of sedition, terrorism and financing of terrorism.

Despite US dirty tricks, Bolivia is finding a way to stay independent

Subnational elections in Bolivia: another vote of confidence for MAS party