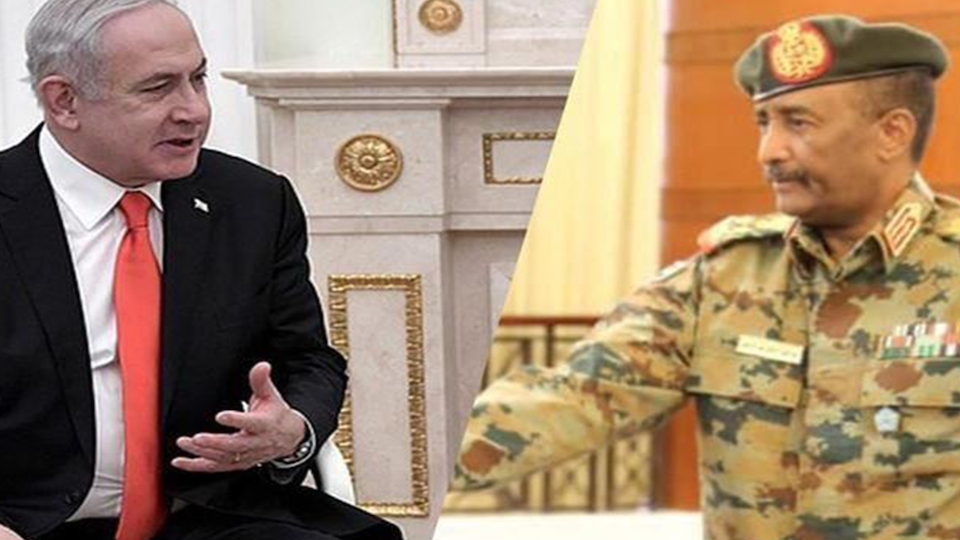 In a statement after a meeting on Friday, February 7, the Central Committee of the Sudanese Communist Party (SCP) condemned the meeting between the president of the Transitional government’s Sovereignty Council, Lt. Gen. Abdel Fattah al-Burhan and Israel’s prime minister Benjamin Netanyahu on February 3.

The purpose of the meeting, the committee said, was to create support in the region for Donald Trump’s “peace plan” for the Israel-Palestine conflict, which has been widely criticized as a smokescreen to make way for full annexation of Palestine by Israel.

This meeting, the statement read, is a step towards the US plan to create a “horn of America” in the Middle East and North Africa region, “and to eliminate the Palestinian issue in full and to encourage the Arab governments to participate in the project in the region and to stop the struggle of the Arab peoples in Iraq, Lebanon, Sudan and Jordan.”

Neither the prime minister nor the cabinet was informed about this meeting where al-Burhan and Netanyahu discussed the normalization of relations between Israel and Sudan. As per the constitutional document signed by the representatives of the former military junta and the civilian opposition to make way for a joint civilian-dominated transitional government, foreign policy must be conducted by the cabinet.

All members of the cabinet, except the ministers of home affairs and defense, are appointed by the civilian coalition, the Declaration of Freedom and Change Forces (DFCF). The DFCF came together to represent the protest movement that brought down the dictator Omar al-Bashir and forced the military junta which had subsequently seized power to make for a civilian dominated government.

On the other hand, the sovereignty council, headed by president Burhan, does not have the power to conduct foreign policy. Despite this, the president met Netanyahu and discussed the normalization of relations in the Ugandan city of Entebbe.

“The Prime Minister was not informed about the visit of the Chairman of the Sovereign Council to Entebbe or his meeting with the Israeli Prime Minister. Accordingly, there was no notification or consultation regarding this matter,” said Faisal Mohamed Saleh, information minister and the spokesperson of the cabinet. The minister said that they found out about the meeting through the media.

However, it appears that the US secretary of state, Mike Pompeo, was aware of the meeting. Soon after the meeting, State Department spokesperson Morgan Ortagus issued a statement confirming that Pompeo had spoken to Burhan the day before the meeting.

“Secretary Pompeo thanked General al-Burhan for his leadership in normalizing ties with Israel as a result of General al-Burhan’s recent meeting with Prime Minister Benjamin Netanyahu in Uganda at the invitation of Ugandan president Yoweri Museveni,” the statement read.

However, the Ugandan government has made no statement on the meetings, whose pictures have not been released. An unnamed military official reportedly told Associated Press that the meeting was coordinated by UAE. However, the US role in setting up this meeting was also indicated by the statement of Ofir Gendelman, the spokesperson of Israel’s prime minister.

“Prime Minister Netanyahu believes that Sudan is headed in a new positive direction and he expressed his views to the Secretary of State of the United States of America,” he said in a tweet.

The Palestine Liberation Organization (PLO), on the other hand, has expressed its disappointment. Secretary General of PLO, Saeb Erekat, said in a statement, “This meeting is a stab in the back of the Palestinian people and a blatant departure from the Arab peace initiative.”

“The historic position of the Sudanese people and their state is to not deal with or normalize relations with Israel, in support of the Palestinian people and their legitimate rights to build their fully sovereign state,” said the Sudanese Professionals Association (SPA), an umbrella organization of trade unions banned under al-Bashir’s regime, which speareaded the Sudanese revolution which put an end to his almost 30 years of rule.

The sovereignty council, the SPA insisted, has no right to change this position of the Sudanese people in support of the Palestinian cause.

Condemning al-Burhan’s exceeding of his constitutional mandate, the SPA has yet again reiterated the need to complete the formation of legislative council. With 67% of its seats reserved for DFCF and the remaining for other political parties which did not support the former regime, the legislative council can serve as a bulwark against the tendencies of the military components of the transitional government to exceed its mandate and hijack the role assigned to the civilian authorities.