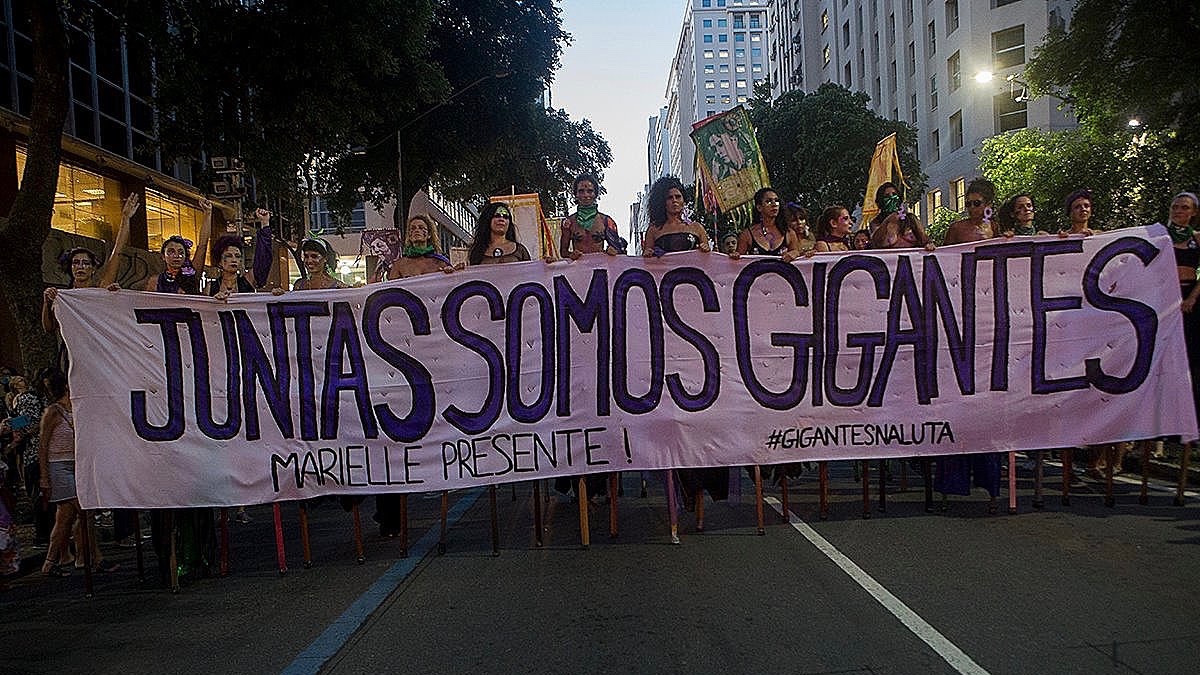 “All I ask of our brothers is that they take their feet off our necks and let us walk”. The phrase by Women’s Rights activist Sarah Moore Grimk, who lived in the nineteenth century, has not become irrelevant. More than 200 years later, the sentence describes with almost surgical precision what the biggest impediment to equality is.

Till this day, according to data from OXFAM, women are at the forefront of more than 75% of unpaid labor in the world. Before becoming of age, they already dedicate considerable hours of their lives to a market that sustains capitalism: they are responsible for the upbringing of the youth, care for the elderly, maintaining households and even caring for the most basic needs of their husbands and partners.

Currently 42% of women find themselves outside of the formal labor market. Among men, this number is 6%. At the same time that this scenario is perpetuated, the presence of women involved in social struggles also grows. It is them who are at the forefront of movements that are sometimes not directly related to the feminist cause. In unions, collectives, major global and regional issues, political protest and so on, female leadership is more and more on display.

Brasil de Fato collaborator and militant in the Brazilian Popular Front, the lyricist Lorena Lemos recently analyzed how women have fought all major battles for the opposition. She uses the Belo Horizonte street carnival as a microcosm that reflects a global shift.

“I think the strength we dream about and build on in our day to day comes from women. We know for a fact, that even though we are the majority, all the time our abilities, our wages and our accomplishments are diminished. Based on the debate that we want to build a different society, this new society has to based on women’s struggles. If finds fertile ground in women’s struggles. This bring me a lot of hope, because I think that change comes from women”, points out Lemos.

Following this same thought process, this week, the Tricontinental Institute of Social Research began publishing the series, Women in Struggle. During the course of the year, stories will be told of women who constructed, and continue to construct resistance movements globally. In the first edition, the Institute analyses the intersection of women’s struggles in the Americas, Asia and Africa.

One of the cases mentioned in the dossier is the construction of the Not Him Movement, born in 2018, and against the election of Jair Bolsonaro to the presidency of Brazil. The organizing and reach of the protests, which happened internationally, are fruit of women’s labor. The issue wasn’t specific to the feminist cause, but today the Not Him Movement is considered the largest female mobilization in the history of Brazil.

In Venezuela more than 60% of the leadership of local councils is exercised by women. In South Africa, they are protagonists in the fight for access to medication, which began in the 1990’s. More recently, in India, women are at the forefront of the fight against changes in citizenship laws, which discriminate against the Muslim population.

In Brazil, the expressive growth of women taking part in militancy is being observed for some decades. From being present in the fight against the dictatorship, to the Not Him Movement, they have been essential for passage of amnesty, the direct vote, the union movement, the taking to the streets of the “painted faces” for the impeachment of Fernando Collor de Melo, the student movement, the fight for land and housing among so many others.

The photographer Claudia Ferreira tracks tracks and portrays this movement since the 1980’s. She manages the image bank Memory and Social Movements, whose mission is to help saving the memory of, and be a public historical archive for Brazilian social movement, especially feminist ones. More than just the participation of women in social movements, Claudia also notes the diversification of this presence.

“I used to say that I photographed the feminist movement, but today I say that I photograph social movements. Women are very much present in the political sphere, as well as the rural workers sphere, the LGBTQ spaces, in the black movement. When I started off, the feminist movement was basically white middle class women. Today it’s a completely different story, it’s much more ample”, stated Ferreira.

Women of the countryside, forests and rivers

The examples of social struggles that illustrate the protagonism of women are increasingly common. In Brazil, perhaps one of the movements we can see this most clearly is the movement for the right to land. The March of the Daisies, organized by the National Confederation of Agricultural Workers (CONTAG), has brought thousands of women from rural regions to Brasilia for the past twenty years. Every year this mobilization grows in strength.

In the first edition in 2000, there were 20,000 participants. In 2019, around 100,000 women participated in the march, in spite of the conservative and oppressive political climate that has taken over the country.

Vilenia Aguiar, researcher from Family Agriculture Studies of the Federal University of Santa Catarina and advisor of the Women’s Secretary of CONTAG, explains that the daisies reveal a specific type of feminism, that comes from the daily demands, not the liberal ones, and that impact every detail of these women’s lives.

“They are women that struggle, that deal with things that women in urban contexts do not have to. They are women that sometimes do not have access to water, that have precarious housing situations. In the countryside, forests and rivers, many times the social security depends on them. There is no State for these women. They have to take care of health with what they have, because they do not have access to a health center. With the question of health, food, education, it is women who must guarantee all of this. Where the State is not present, women must take charge of social security. They feel very strongly. When they say ‘I am here for rights’ they know exactly what they are saying,” explains Aguiar.

The Daisies March is one of the movements that Cláudia Ferreira has been photographing for the last couple of decades, and for her it is one of the movements with the greatest potential to go far.
“I feel that, if there is a movement that has the capacity of transforming what we are seeing, this lack of hope, it is the feminist movement. It is us women that are organizing to confront all of this barbarism. It is impossible to stop women,” Ferreira concluded.