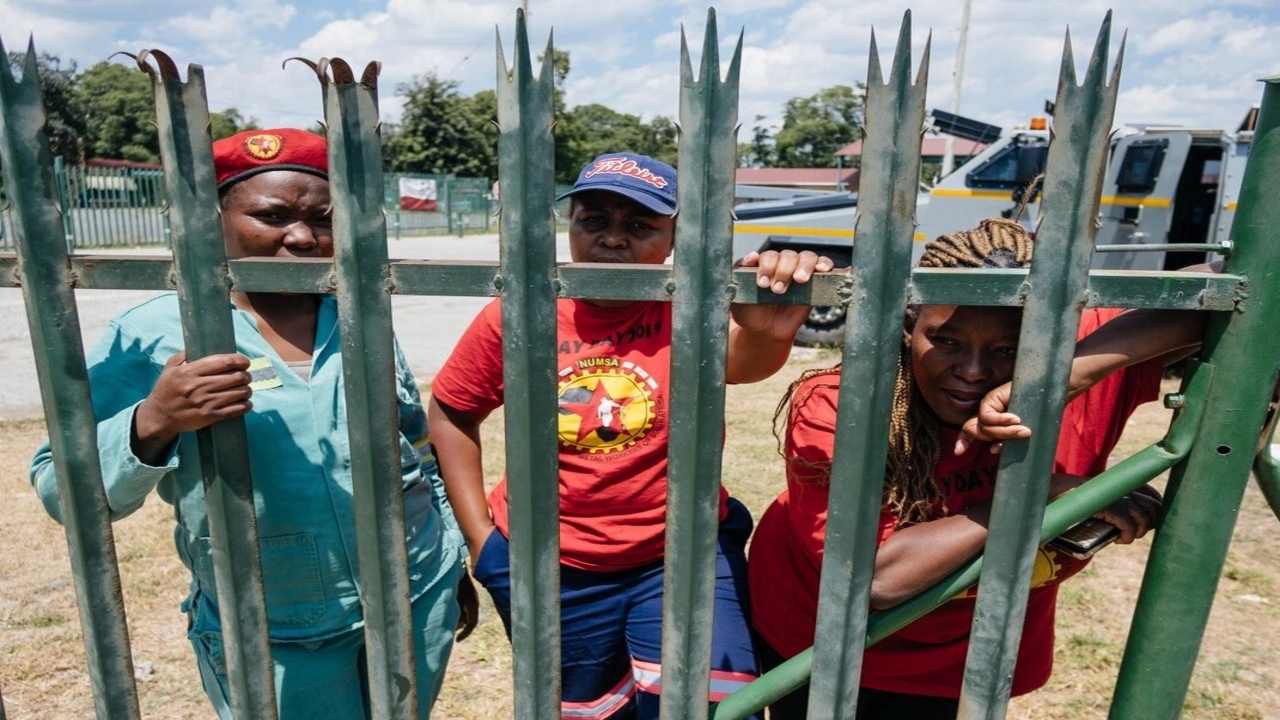 (From left) Mathapelo Nyanga, Lucy Bessit and Matshidiso Leballo, who were forced to leave the underground sit-in strike on March 5 after being denied access to sanitary pads. (Photo: New Frame)

On March 15, Sunday, South Africa’s South Gauteng High Court granted an interim order in favor of the National Union of Mineworkers of South Africa (NUMSA), allowing the union to provide food to its members who have been on an underground sit-in strike at Lanxess Chrome’s Rustenburg mine since February 17.

Lanxess is a manufacturer of chrome chemicals and one of the world’s largest suppliers of chrome ore, employing 14,300 workers across its operations in 33 countries. The management had refused to permit NUMSA to supply any food to the miners on strike, against which the court passed this intermittent order.

According to NUMSA’s Hlanganani regional secretary Jerry Morulane, the strike action is in “protest against various issues, including sexual harassment and the exploitation of contract workers at the mine.”

He added that the management “are protecting a sexual predator who was found guilty by an independent chairperson of sexual harassment and a recommendation was made for his immediate dismissal, but Lanxess refuses to fire him. They are protecting him and he has been placed on special leave. Lanxess management is shamelessly defending a sex pest and they must be condemned!”

The other main grievance of the workers is the company’s practice of employing workers through labor brokers, thereby paying lesser wages and providing fewer benefits for the same work.

A Constitutional Court ruling in July 2018 had stipulated that any worker hired by a company through a labor broker at a pay of R205,000 per annum or less would become an employee of that company. However, Lanxess has not paid heed to the ruling, paying contract workers less with fewer benefits than the permanent employees for the same work.

NUMSA general secretary Irwin Jim claims that the contractors and labor brokers employed to outsource the “so-called non-core services” by the company can “only deliver sweatshop conditions.. All they deliver are inferior infrastructure, inferior hostels, squatter camps and loan shares. Remember that this is what was at the core of the Marikana massacre of 2012.”

After workers took to the sit-in strike on February 17, the NUMSA general secretary had tried to persuade the company management to address their grievances on February 23. However, the management’s refusal to meaningfully engage with them further angered the protesting workers, he claimed.

This strike action was, however, ‘unprotected.’ This meant that the employer could legally cut salaries or dismiss those on strike, as per South African laws which prescribe all other conciliatory measures to be exhausted before a ‘protected’ strike can be initiated.

Jim maintains that this strike “could easily have been avoided”. CEO Leon Richardson had been approached by the democratically elected shop-stewards representing the workers, following a general meeting over their grievances. They presented the issues faced by the workers including corruption and irregularities in payments before the company management, seeking redressal.

However, the CEO “dismissed them” and “unceremoniously frogmarched them out of the office,” Jim added in his statement. The disrespect towards the workers’ representatives escalated tensions, after which the sit-in strike was started inside the underground mine.

NUMSA maintains that as a union, it “cannot condone any strike action which does not conform with the Labor Relations Act”, yet “we have a duty to ensure that our members’ constitutional rights are protected.”

While NUMSA was denied access to the striking workers, the management only supplied them with Phakamisa cereal in a bid to coerce them to give up the protest and come overground in order to get cooked food. Several workers had collapsed in the mine due to the lack of proper nutritional intake, many more suffering from diarrhoea and other stomach-related issues.

Deeming it a “barbaric act”, NUMSA while approaching the court argued that the company’s actions were a “gross violation of human rights”.

The court’s intermittent order on Sunday gives the union access to supply food to the striking workers until Thursday. There are other serious concerns faced by workers inside the mine as well, including load shedding which has now become endemic to South Africa due to the financial crisis in the state’s electricity company, Eskom.

Regional secretary Jerry Morulane has warned that in case of a power cut, “the ventilation gets cut off and this also cuts off all communication. This means workers [will] not have access to fresh air, nor can they radio for help during a blackout. This is extremely worrying given that accidents happen regularly and it is extremely unsafe underground.”

“Furthermore”, he added, “the recent announcement by president Cyril Ramaphosa to declare a national state of disaster because of the rapid spread of the Coronavirus has deepened our concerns for the safety of our members.”

NUMSA is set to appear in court on March 19 to “argue for a permanent order on this issue.”