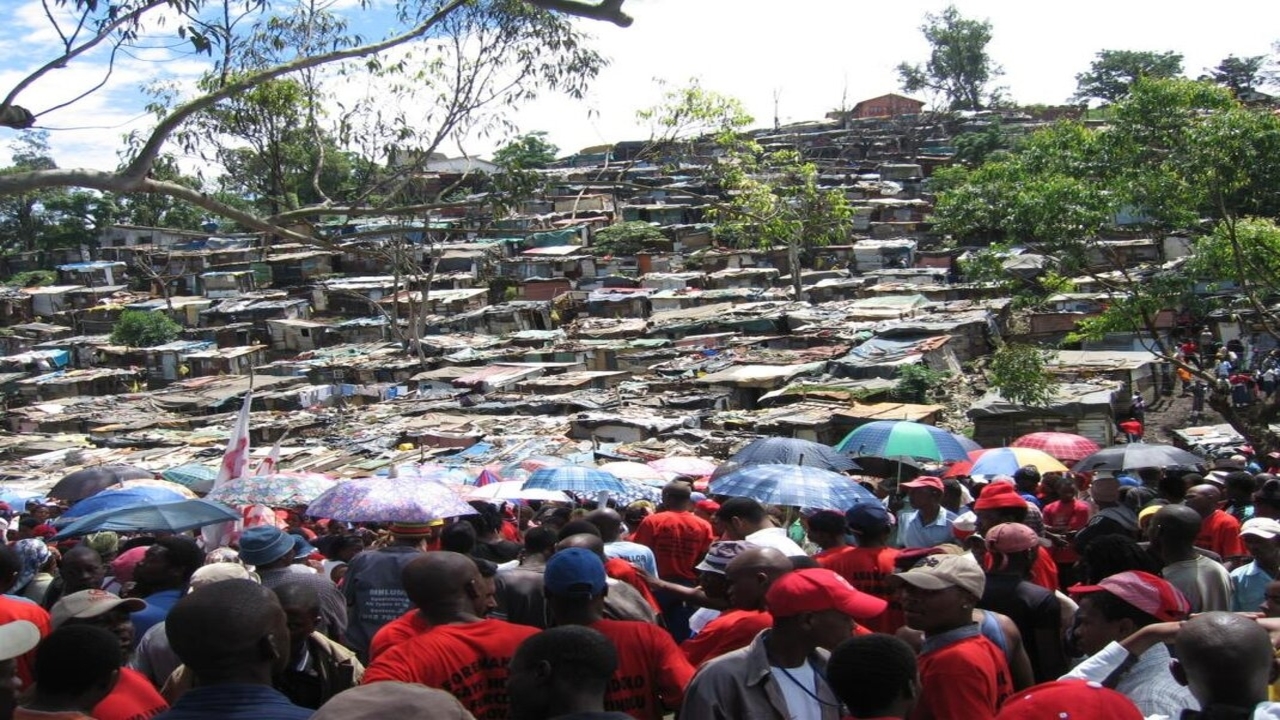 Settlements generally consist of around a hundred shacks tightly packed together, with entire families crammed into single-room spaces.

The deadly Coronavirus has already infected over 550 people in South Africa. President Cyril Ramaphosa declared the pandemic a national disaster on March 15, when the government had confirmed 62 positive cases in the country. On March 24, he declared a three-week lockdown to help restrict the spread of infection.

The South African government also imposed travel restrictions, shut down schools and banned gatherings of over 100 people, in addition to other measures taken to contain the spread of the virus. However, it has drawn criticism for not taking into consideration the condition of the urban poor, who are unable to abide by the health advisories issued.

Ramaphosa had earlier said, “We are undertaking a mass communication campaign on good hygiene and effective prevention behavior,” and called on everyone to “wash their hands frequently with soap and water or hand sanitizers for at least 20 seconds”, and to “avoid close contact with anyone with cold or flu-like symptoms.”

Nevertheless, a sharp spike in cases has been registered in South Africa.

The president, while advising precautionary measures for everyone, has assumed “that everyone lives in a house, a house that is at no risk of being destroyed by the state, a house which has water and sanitation. But the reality is that millions of us continue to live in shacks of indignity,” said shack-dwellers’ movement, Abahlali baseMjondolo, in a statement.

Abahlali’s leader, Sbu-Zikode, said that the government’s recommendations are a “joke” for those who live in the makeshift shacks built by Abahlali members. Settlements generally consist of around a 100 shacks tightly packed together, with entire families crammed into single-room spaces. Such settlements have only one communal tap as a source of water, often put in place by the shack dwellers themselves with no government assistance or approval.

When such “illegal” connections are identified by the government, water supply is cut, forcing the shack dwellers to rely on collecting water from nearby streams. Domestic waste also often piles up in these settlements as municipalities across the country refuse to collect waste from these places.

Additionally, having no access to toilets, most of the dwellers in these settlements “are still using bushes to relieve themselves,” said Abahlali in its statement. They are also repeatedly subjected to violent evictions, with the police and Anti-land Invasion Units invading settlements, demolishing shacks and burning down the dwellers’ meager belongings.

House quarantine without a house?

Even in the midst of this declared national disaster, another such violent eviction was carried out in the township of Ekuphumleni in Eastern Cape on March 22, Sunday. During the eviction, one Abahlali member was injured and had to be hospitalized.

Along with Abahlali, 26 other social justice organizations – including the Association for Rural Advancement, Reclaim the City and Socio-Economic Rights Institute of SA – have called for a moratorium against all evictions until the Coronavirus outbreak is brought under control.

“One cannot practice physical distancing should you find yourself and your belongings on the side of the road or in an open space and exposed to the public with no means of protection,” stated a letter from these organizations addressed to the National Command Council (NCC). The body has been set up and chaired by the president to coordinate the measures taken to tackle the COVID-19 emergency, and includes the ministries of health, home affairs, human settlements, rural development, land reform and the police.

Through the declaration of a national disaster by the president, the relevant ministries and the NCC have been granted powers to fight the outbreak. The letter to the NCC states that under the circumstances, the body is authorized to impose a moratorium on evictions. Failing to take this urgent step could result in dire consequences, the letter warns.

“Research worldwide has shown that homelessness is closely linked to exposure to infectious diseases, specifically respiratory illnesses such as tuberculosis and immunodeficiency,” as per the organizations.

According to UN Special Rapporteur on the Right to Housing Leilani Farha, “As the virus spreads across the globe, I’m concerned that many are still facing evictions and the threat of evictions.. A global policy has emerged to contain the virus: Stay home and Wash your hands. The logical extension of a global “stay-home policy” is a global ban on evictions. There must be no eviction, of anyone, anywhere, for any reason. Everyone must be able to stay home.”

“This doesn’t just mean no eviction order, or no eviction notices,” she adds, “It also means ensuring the ban is fully implemented – including banning evictions that were ordered prior to the pandemic. And it extends to not just those living in the formal housing sector, it extends [also] to those living in the informal settlements.. to indigenous people living on their lands.”

However, experts in South Africa fear that even if evictions are halted, the unhygienic conditions in the shack dwellers’ densely packed informal settlements may lead to mass infections.

38-year-old Fezile Ncethwa, an Abahlali member living in a shack in the Kennedy Road settlement in Durban, told the Daily Sun, “We’re expecting the worst. We pray that none of us catch the virus because if that happens, it will finish us all.”

Along with the moratorium on evictions, Abahlali has demanded a moratorium against the stoppage of water and electricity supply to the self-laid connections in their settlements. It has also demanded inclusion of the informal settlements in municipal refuse removal programs and the provision of sanitation “to all shack settlements as an urgent priority.”

“All people detained by the state for non-criminal acts, such as being undocumented, occupying land, participating in arranging self-organized connections to water, electricity and sanitation, and so on, must be released with immediate effect,” states their list of demands.

Abahlali also insisted that all hospitals and health centers in the country be made accessible to everyone living in South Africa, “including undocumented migrants,” who have lately been frequent targets of mob attacks and police repression.

Abahlali, since its inception in 2005, has been organizing the urban poor to occupy unused lands and build shacks in areas where economic opportunities are relatively accessible. It has also been striving to impart political education to the urban poor.

“Disasters, like fires and floods, always affect impoverished people the most. For this reason, we have been saying, during [the] 15 years of struggle, that disasters are political,” its statement says.

As per Abahlali, “Disease is also political,” and “Class determines who has medical aid and who does not, who has access to water [and] sanitation.. and who does not. We have reminded all our members that access to life saving medication for people living with HIV was won through struggle and the politicization of an important health issue. It is now vital that we politicize the crisis caused by the coronavirus and that impoverished and working-class people take their place in this process.”