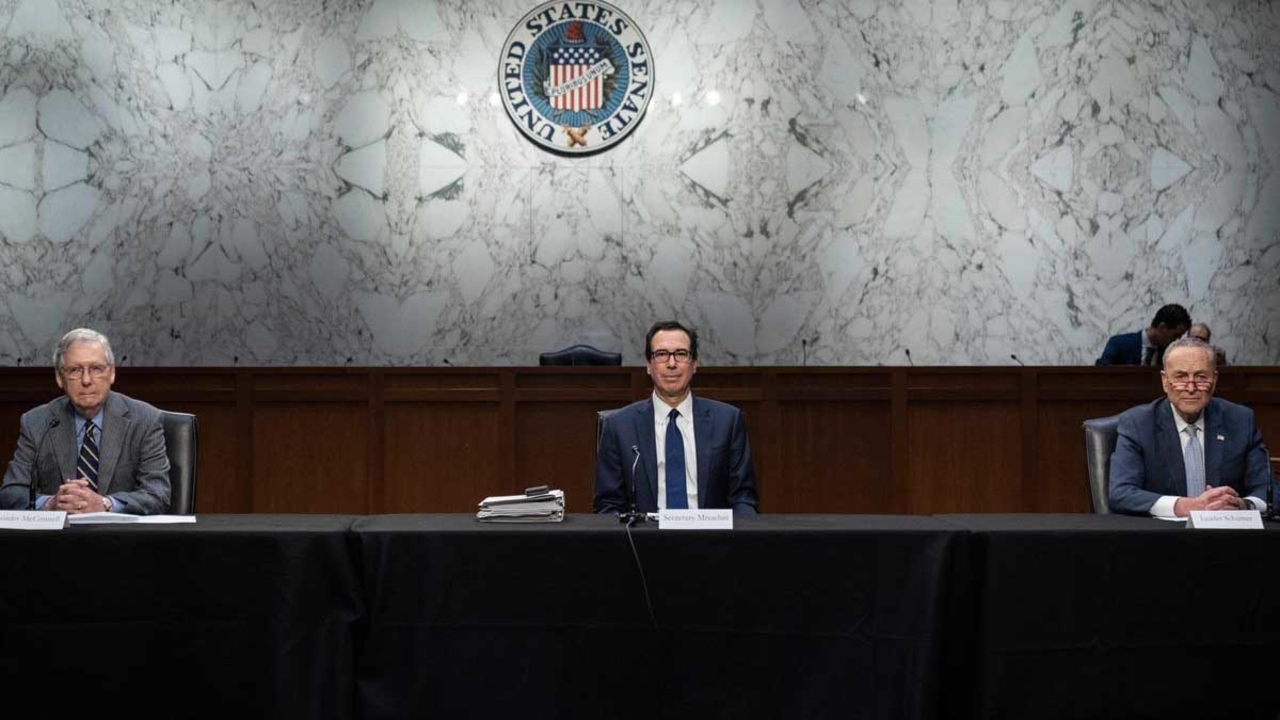 (From left to right) Mitch McConnel, Steven Mnuchin and Chuck Schumer, part of the negotiations for the relief deal. (Photo: AFP)

On March 25, Wednesday, the US Senate unanimously approved emergency relief spending of USD 2.2 trillion in a 96-0 vote to fight the COVID-19 crisis in the country. The US House of Representatives is also expected to vote in favor of the bill on Friday. The Congress and the administration of president Donald Trump had successfully negotiated the deal on Tuesday. Called the Coronavirus Aid, Relief, and Economic Security Act (CARES Act), the plan has bipartisan support from both the ruling Republican Party and the opposition Democratic Party.

The US is fast becoming a major hotspot of the COVID-19 pandemic, with close to 70,000 cases and over 1,000 deaths reported so far. The government however has struggled to come up with a comprehensive emergency plan to tackle the crisis.

The relief package on Wednesday was declared after marathon closed-doors negotiations for nearly 15 hours between the Trump administration represented by treasury secretary Steven Mnuchin and the Senate leaders of the Republicans and the Democrats, Mitch McConnell and Chuck Schumer, respectively.

The deal will pave the way for investment worth USD 2.2 trillion to boost medical infrastructure and support establishments and firms that will be affected by the lockdown. It is also expected to include direct cash transfers of USD 1,200 to low and middle class households.

The bill expands unemployment insurance by USD 600 for workers employed in small and large businesses, including those working in the gig economy and the self-employed. There were disagreements between the Republicans and the Democrats over the lack of adequate support to hourly-wage and gig economy workers in the deal and the limited scope for rent and mortgage freezes.

As per the deal, a USD 150 billion infusion will be made into the healthcare system, including the Indian Health Service (for native Americans). USD 150 billion is allocated for local governments to deal with funding shortages due to lockdowns and USD 367 billion in soft loans and grants for small and medium businesses.

Another relief package was also negotiated and passed with bipartisan support recently to sanction USD 100 billion for paid sick leave benefits and to expand coronavirus testing, which also had president Trump’s approval.

Meanwhile, Trump is already planning on rolling back the social distancing measures implemented in various parts of the country by Easter. Such a plan may be disastrous and against the multiple warnings and advisories issued by public health experts and the WHO to deal with the pandemic.