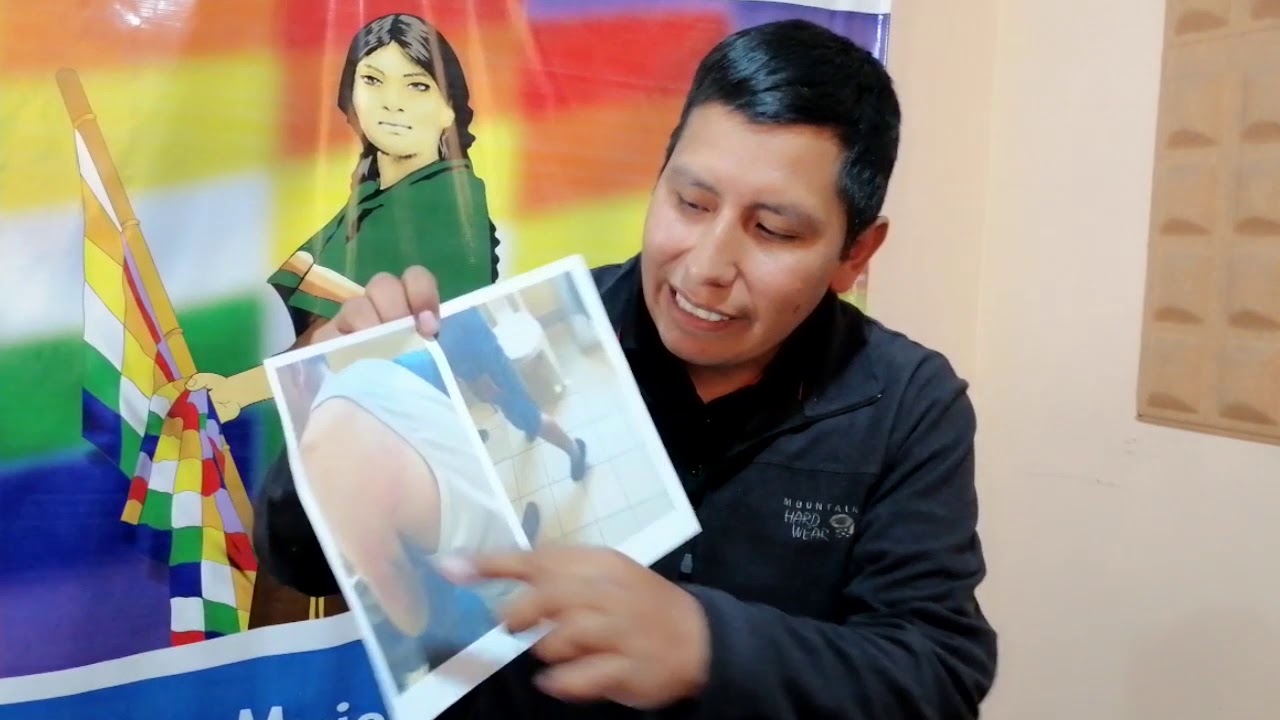 Rene Guarachi was tortured by the police after filming a video of state repression.

Rene Guarachi, a Bolivian journalist, was in the Indigenous city El Alto reporting on a protest when police launched a violent attack. Guarachi filmed the acts of repression that he and dozens of others witnessed and suffered. He circulated the images widely across social media, showing once again the violent, racist and undemocratic nature of the de-facto government that seized power following the coup d’état on November 10 which forced President Evo Morales out of office.

The people in El Alto were protesting against coup-supporting politicians who were in their city for a special session of the Senate to honor the 35-year anniversary of El Alto. The community took the opportunity to denounce the human rights violations of the de-facto government and the repressive forces since the coup, such as massacres, one of which took place in the Senkata neighborhood of El Alto, and the arbitrary detention and imprisonment of dozens of youth and activists now held as political prisoners. The survivors demanded justice for their family members and criticized the repressive actions of the coup government. In response, police attacked the protest and launched tear gas, hitting a primary school and affecting the children who were in class at the time.

Shortly after the protest, Rene Guarachi was arrested, beaten and tortured by the police. Since the coup in November 2019, working-class media and media that was allied with the Morales’ Movement Towards Socialism (MAS) have suffered constant attacks.

He's still in custody because in Bolivia freedom of the press and of expression don’t exist under the Añez regime. pic.twitter.com/wwo6zmWLyL

In the first weeks of the coup regime, teleSUR and RT were forced off the air and grassroots journalists had to flee or go underground. Bolivia TV had been taken over by a mob protected by the right-wing. Al Jazeera TV journalist Teresa Bo was tear gassed directly in the face but continued to report. People began recording from their own phones. They were harassed, beaten, tortured, jailed.

Mainstream Argentinian TV journalists were threatened and fled the country under diplomatic protection. An Argentinian, Sebastian Moro, was likely beaten to death on November 16, though the coup authorities insist he had a stroke. Since 2018, Moro had worked with a Bolivian campesino media outlet of the largest peasant confederation, Prensa Rural. His family investigated. The injuries were documented, and suggest torture.

Grassroots radio stations belonging to a network of 53, survived only because their communities protected them. All receive threats. Many are no longer on the air. Radio TV Bartolina Sisa has just played music for months.

Organizers and journalists, YaYa Marin Coleman, Christophe Simpson, Pambana Bassett, and Cindy Forster spoke with Rene Guarachi Charca who works with the Radio TV Bartolina Sisa, of the Confederation of Indigenous and Campesina Women of Bolivia, about his experience and the overall situation for people’s media in Bolivia under the coup regime.

Can you talk about the events of March 5 and what happened when you were illegally detained?

I was filming on the 35-year anniversary of the Indigenous city of El Alto, and coup politicians arrived in a city that hates them. The de-facto government had ambulances ready at their meeting place, as if they expected deaths.

A mass was held that same day in Senkata, the neighborhood of El Alto that suffered the massacre on November 19 and working people in El Alto were furious at the arrival of the right-wing politicians.

The coup regime launched tear gas, and some of it entered a school. The children were crying. They are from the same community where the massacre took place. There was fear, tear gas and panic.

I immediately filmed live and posted the recording to Facebook. None of the other journalists there was doing this.

There were outrageous attacks on children that I filmed. Afterwards, there was more police repression, which I also filmed and we shared on Radio TV Bartolina Sisa.

I had done nothing illegal. The police called me a fake journalist even though I showed them my official credential.

Then, they illegally detained me, burned my face with cigarettes, kicked and beat me. Not a single corporate media spoke of this or showed the photos of my injuries and burns. Self-censorship has been intense.

For the more extreme torture, they took me to another, more private location. No charges had been filed against me during all of this.

Finally, the national human rights defender contacted the police, at which point the police started inventing all kinds of false charges against me.

Guarachi was released without charges the next morning, March 6. Photos were circulated of his injuries. He explained that a psychologist who examined him prescribed 6 weeks of rest to recover from the trauma. But Rene Guarachi declared that he went back to work almost immediately because he is a journalist. He said:

My family begs me to leave my job. But I love this work.