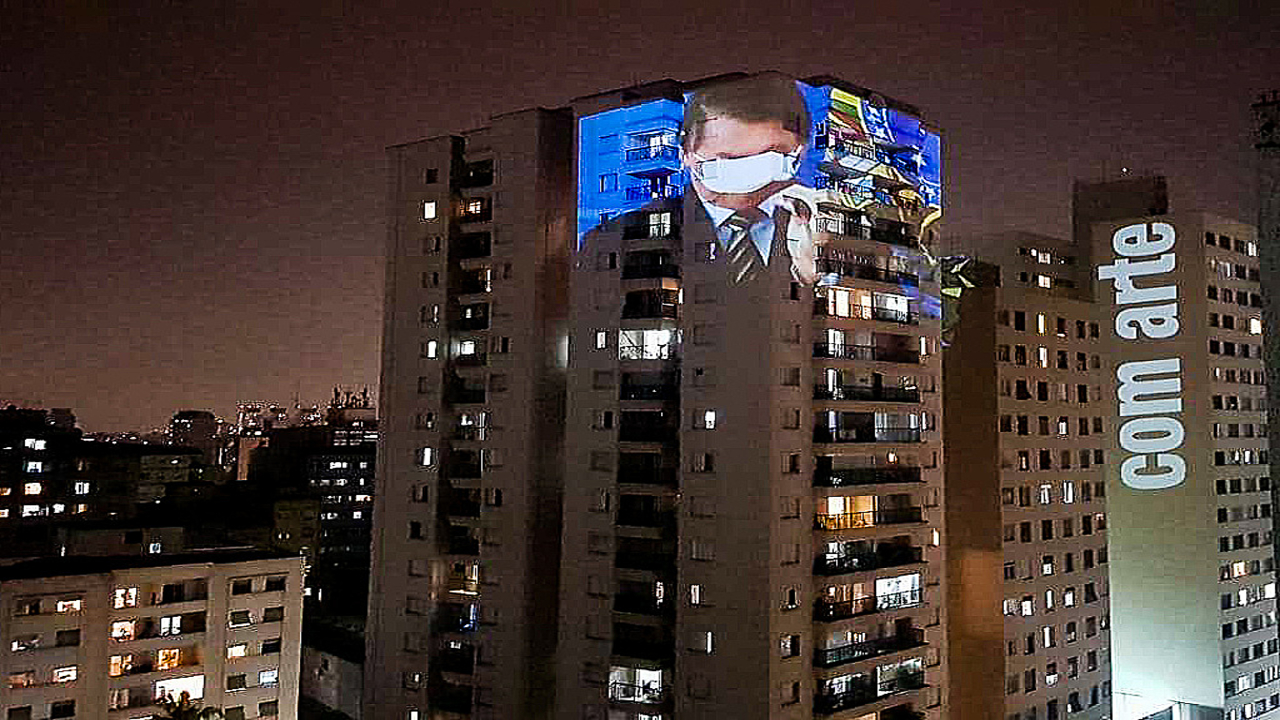 The government of Jair Bolsonaro has been severely criticized for its flawed handling of the COVID-19 pandemic. Here, an image of Bolsonaro failing to put on a mask properly is screened on a building as a mark of protest. Photo: Brasil De Fato

The criminal complaint (read here) against the President of Brazil, Jair Bolsonaro, was filed today, April 3, by the Brazilian Association of Jurists for Democracy (ABJD) with the International Criminal Court (ICC) for committing crimes against humanity.

The attorneys who filed the petition, Ricardo Franco Pinto (Spain) and Charles Kurmay (United States), alleged that Bolsonaro took actions “for the purpose of minimizing the seriousness of COVID-19 and encouraging activities that can only result in the rapid and uncontrolled spread of this deadly illness. These violations of international criminal law deserve the attention of the International Criminal Court to protect the lives, health and well being of millions of people living in Brazil and throughout the world. Statistical projections demonstrate that there will be more than 1 million deaths in Brazil if the WHO recommendations are not met.”

The ABJD requests that the International Criminal Court initiate an investigation into the President’s  conduct and indict him for putting the lives of millions of his citizens at risk of illness and death pursuant to Article 7 (1) (k) of the Rome Statute.

The complaint argues that the president has attempted to minimize the severity of the pandemic while violating the recommendations of health authorities around the world, especially the guidelines of the WHO and those of all nations that were or are at the epicenter of the pandemic through:

As stated in the criminal complaint, Mr. Bolsonaro through his actions has “substantially endanger[ed] the physical health and well-being of the Brazilian population, exposing them to a lethal virus which has the capacity to swallow the population whole, as already has been seen in several countries. Countries that have neglected the quarantine policy are where the impact of the pandemic has proved to be greatest, as in Italy, Spain and the United States”.

According to the ABJD, Bolsonaro has and continues to commit the crime of epidemic, established in article 267 of the Brazilian Penal Code and in Law number 8.072 / 1990, which provides for atrocious crimes, in addition to violating the preventive sanitary measure, as established in article 268 of the Penal Code. The President also has violated Law number 13,979, of February 6, 2020, which deals specifically with the emergency of Covid-19 and inter-ministerial decree number 05, of March 17, 2020, which establishes in its articles 3 and 4 that the failure to comply with the isolation and quarantine measures, as well as the resistance to submit to medical examinations, laboratory tests and specific medical treatments can lead to sanctions according to articles 268 and 330 of the Penal Code.

For this reason, the members of the Association complain that Bolsonaro as a Head of State and the Executive Branch of Brazil’s Government has rejected health and scientific authorities that recommend an effective strategy to reduce the effects of the pandemic and to save as many lives as possible. This, they argue, is because Bolsonaro finds their recommended safety measures inconvenient and harmful in the short term to the Brazilian economy.

Thus, ABJD complains that “The president of Brazil, echoing unscrupulous businessmen, has stubbornly refused to adopt the world standard of combating the pandemic, social confinement. Thus, Brazil due to the actions of President Bolsonaro ceases to participate in the strategy to flatten the infection curve. Rather, he seeks to expand it. Bolsonaro’s conduct inevitably will cause the health system in Brazil to collapse.”

The Rome Statute guides the actions of the International Criminal Court and it is included in the Brazilian legal system after its approval in the National Congress (Decree 4.388 / 2002). By incorporating the regulations, the country accepts that there are crimes that directly affect thousands of people globally, causing profound rejection of humanity.

Article 27.1 of the Rome Statute establishes that the immunity of the head of state does not exempt him from his criminal responsibility nor does it represent a reason for reducing his sentence. The immunity of the office does not prevent the Court from exercising its jurisdiction either.

Brazil not only ratified the Rome Statute, but included it in its 4th paragraph to article 5 of the 1988 Federal Constitution, recognizing the country’s submission to the jurisdiction of the International Criminal Court.

Thus, the ABJD affirms that it has no doubt about the legitimacy and competence of the International Criminal Court to process its complaint. In addition, the Association shows that members of the Brazilian federal prosecutor’s office had already tried to get the Attorney General of the Republic – the only authority that could sue the president in the country – to convince Bolsonaro to refrain from continuing to take actions that put the population at risk to a serious epidemic; however, the request was shelved and no action was taken.

“To our knowledge, Brazil is the only country in the world that has a Head of State who advocates against the legal determinations of his own country and those of international health organizations, putting the Brazilian population at grave risk (due to the effect and harmful impact of its attitudes towards the general public, who will not know whom to obey, putting themselves at serious risk),” it adds.

“As has been said many times, the raison d’être of the ICC is to combat impunity. To date, because President Bolsonaro has been able to act with relative impunity he has been emboldened to commit the crimes discussed herein and at present there is absolutely nothing to deter him from continuing to do so”, concluding that “The attitudes of Bolsonaro and his government are leading Brazil to a humanitarian crisis which is as lethal as any genocide, crime against humanity, or war crime that has come before this International Criminal Court.” 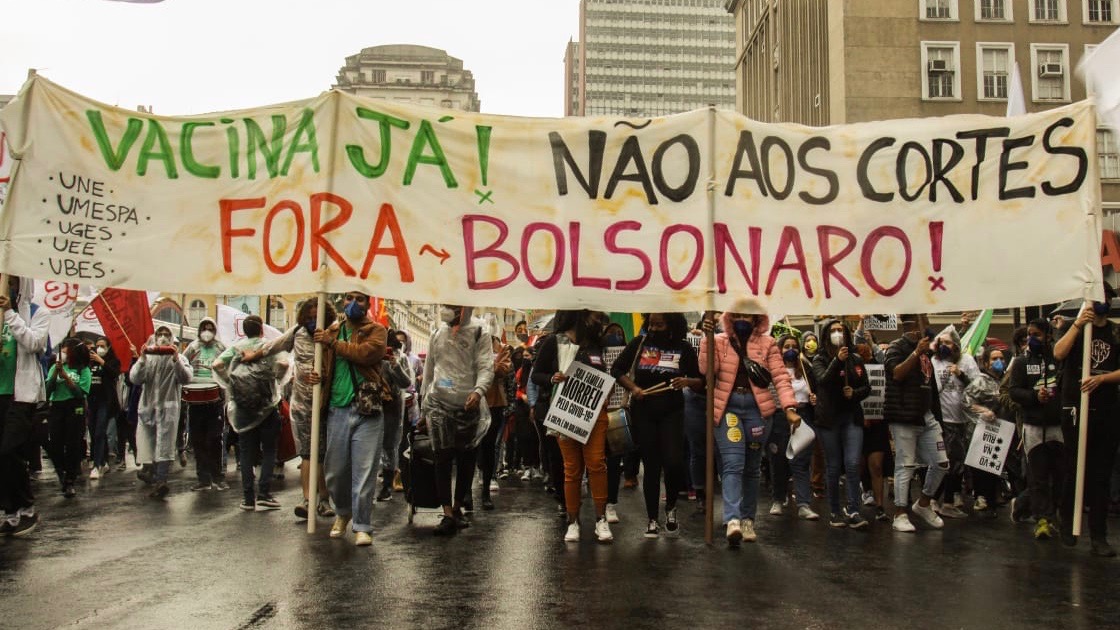 Mobilizations against Bolsonaro gain strength and mobilize around 750 thousand people 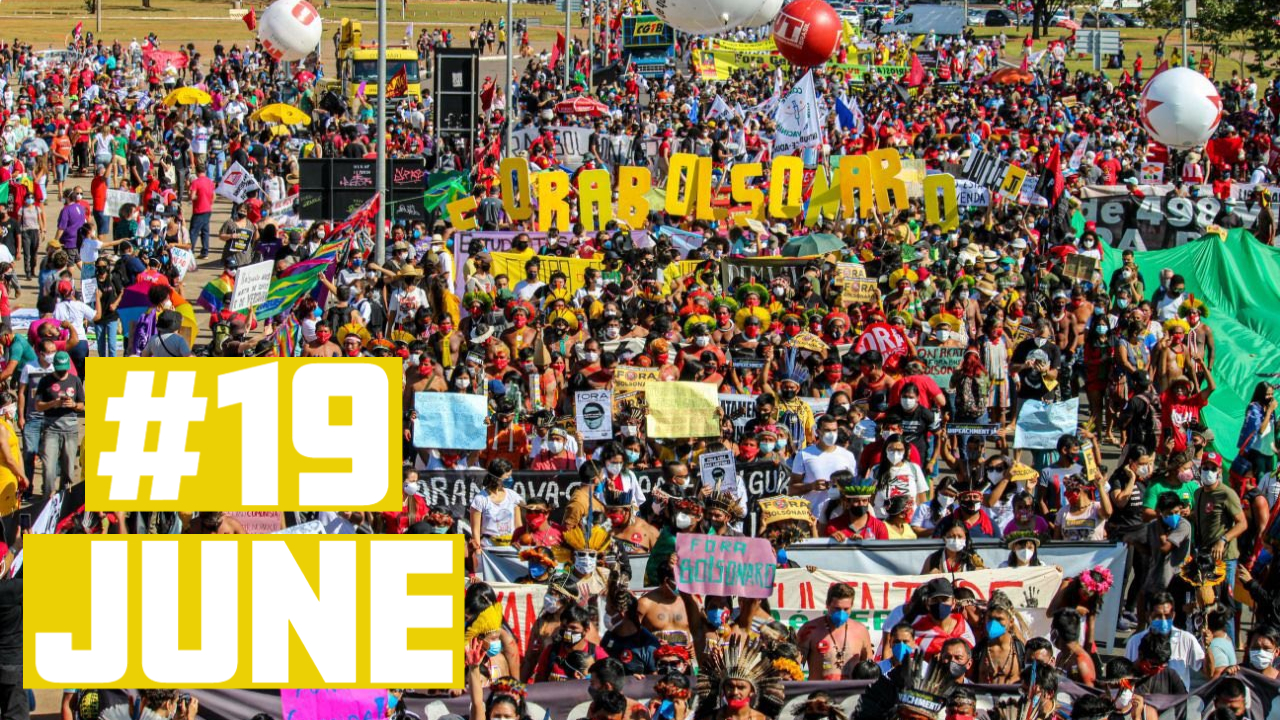 Hundreds of thousands hit the streets against Bolsonaro in Brazil