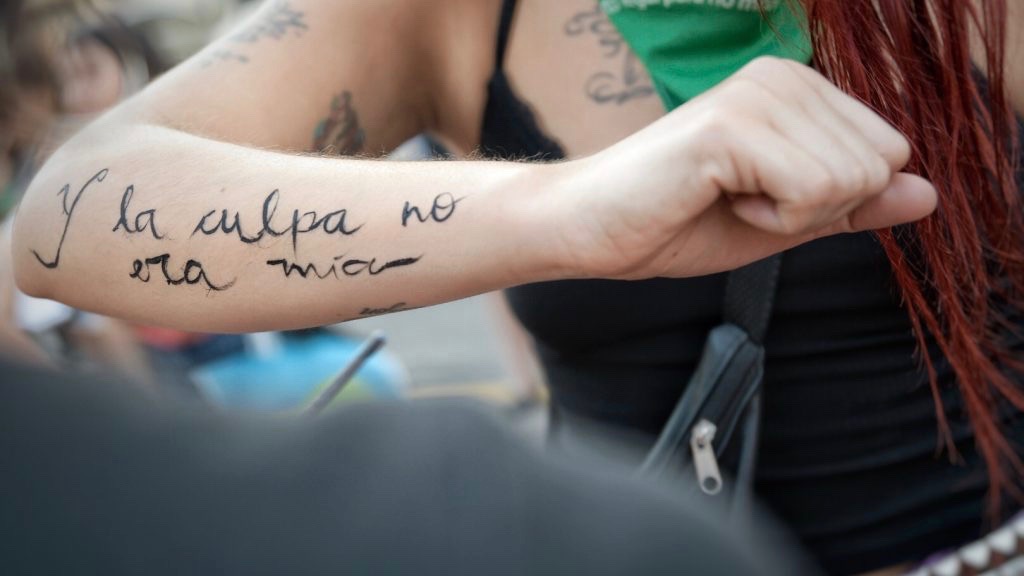 From the Women's Day March in Argentina year. The message on the arm reads "And it is not my fault". Photo: Marcha Noticias

The effects of the shutdown of services, absence of social engagement, unemployment and economic distress due to the global COVID-19 pandemic have led to a spike in domestic and gender-based violence cases worldwide. In Latin American and the Caribbean, where rates of femicide and violence against women is already very high, the preventive and compulsory home-quarantine has aggravated incidents of violence towards women, young girls and the LGBTQI community.

For many across the region, the home is not a refuge, as many of them are forced to shelter under the same roof as their potential abusers. People in the LGBTQI community are especially impacted as they face the added challenge of dealing with the potential lack of social acceptance by families.

In countries across the region, Americas Quarterly and the Agence France-Presse (AFP) reported that hotlines and help-centers have received notable increases of denouncements and reports of incidents of gender-based violence. The number of reported femicides, or the killing of women because they are women, has also seen a troubling increase.

Feminists movements, women’s rights and human rights organizations from across the region have denounced the intensification of gender-based violence and have urged governments to step up measures to address all forms of misogynist violence and protect women, children, and the LGBTQI community.

In Argentina, since the beginning of the social isolation measures, there has been an increase in complaints of domestic violence and rape to women’s helpline no. 144, which provides advice and support to women in situations of violence. The Ministry of Women, Genders and Diversity indicated that such calls increased by 39% during the national quarantine.

In this regard, Ricarda Polo Quispe, an Argentine feminist, warned of the danger that the coronavirus had taken media’s all attention, making invisible that sexism and machismo is killing people. “We have forgotten that there are families who are experiencing gender-based violence: chauvinist, jealous, controlling men, who are taking advantage of this quarantine to lock them up, shut them up, make them submissive,” denounced Polo Quispe. She also said that “the women are exposed to double-edged confinement” and are victims of non-consensual sex. “Men are also satisfying their needs, without their consent,” said Polo Quispe.

During the quarantine in Argentina, at least 19 femicides were registered and 45% of the cases, the murderer was the partner.

In addition, according to a report prepared by the Observatory of Femicides Adriana Marisel Zambrano, from March 20 to April 16, 22 femicides were reported throughout the country. In other words, a woman died every 32 hours in Argentina. The age of murdered women ranged from 2 months to 53 years. According to the police investigation, 72% of the murders occurred in the victim’s home, 56% of the killers were their partners or ex-partners, while in 89% of the cases, the victim knew their aggressor.

Since the beginning of quarantine in Bolivia, the cases of incest and child sexual abuse have seen a significant increase. According to the Bolivian national police, more than four dozen cases of violence against children, including sexual assault and rape, have been reported on an average in a day in the country.

Brisa De Angulo, founder of A Breeze of Hope, a Bolivian organization for child victims of sexual abuse, expressed deep concerns about this sensitive issue. De Angulo told the Thomson Reuters Foundation that during the lockdown, “the risk has increased exponentially.” “Now children are 24/7 with their aggressors. We’re very worried. I’m expecting that this is just going to increase in the following days,” she added. She also reported that “the calls and text messages had been relentless in the night.”

Pilar Díaz, the director of the Office of the Special Prosecutor for Crimes of Sexual and Gender-Based Violence, informed that between March 31 and April 12, over 545 complaints of domestic violence were registered. The department of Santa Cruz, with 221 cases, recorded the highest number of such incidents, followed by La Paz with 105 complaints and Cochabamba with 82 cases.

In addition, according to the Special Force to Combat Violence (FELCV), during the first week of quarantine, Bolivia registered 3 femicides.

In Brazil, since social confinement began in some cities, complaints on social networks about cases of domestic violence increased 431%, according to a study carried out by the Brazilian Public Security Forum (FBSP).

The FBSP analyzed more than 50,000 posts on Twitter, almost 6,000 of which indicated the occurrence of violence against women and girls.

In Chile, calls and text messages reporting gender violence shot up by 70% during the first weekend of the quarantine, according to the Ministry of Women and Gender Equity.

The numbers in some places, such as the Providencia district of Santiago, are distressing. In Providencia, the rate of said calls for help from a local office providing legal, psychological and social assistance grew by 500% during quarantine.

With selective quarantines and less night curfews, the number of reported femicides is low compared to the increase in complaints. In the past one month, 4 femicides have been reported.

In the case of Colombia, according to data from the Colombian Observatory of Women, calls to hotline 155 to report violence against women surged by 91% during compulsory quarantine.

On the very first day of the nationwide lockdown on March 24, a man allegedly shot dead his wife, her sister and mother inside their home in the city of Cartagena. This triple femicide was just a sign of what was to come. According to Vice-Attorney General Marta Mancera, since quarantine was decreed until April 14, 19 women were murdered in femicides.

The Integrated Emergency Service of Ecuador also received 6,819 calls reporting gender-based violence between March 12 and April 11, an average of 235 calls a day.

According to the authorities, the actual number of cases could be higher as the mandatory quarantine, in addition to providing favorable conditions for violence against women, also reduces the opportunities to make complaint calls.

The Central American country is already one of the most dangerous for women as it has one of the highest homicide and femicide rates in the region. In 2019, 406 women were assassinated in the country, the majority with firearms. Activists and civil society groups have reported that the prior rate that one woman is assassinated every 23 hours continues amid lockdown.

In only the month of March, 17 femicides were reported, reaching a total of 72 from the beginning of the year to end of March. The National Police of Honduras as well as the Attorney General also reported a drastic increase in number of domestic violence cases reported, acknowledging that the number reported is not even a complete reflection of reality.

In Mexico, calls and text messages for help against domestic violence jumped by 80% in the first month of mandatory quarantine, the National Network of Refuges (RNR) of Mexico reported recently.

The National Public Security System (SNSP) of the country also informed about the increase in calls to 911 from women, seeking help against family violence, sexual abuse and child abuse.

Additionally, the Marea Verde, a women’s right organization, reported that an astounding number of 163 femicides were perpetrated between March 16 and April 14.

Feminists in Mexico have denounced the increase in violence and demanded that President Andrés Manuel López Obrador execute more effective policies to combat the wave of violence.

Various feminist collectives have adopted different measures to help the victims. For instance, Las Brujas del Mar has been using its social media network to extend digital aid to victims. It has launched an emotional containment network with the support of professional psychologists, who guide victims towards “a safe mental space”, by calls or audio messages. A spokesperson of the collective explained that the services benefit “women who are locked up with their abusers, losing their job, without money, having anxiety attacks, or suicidal thoughts.”

The collective is also offering digital accompaniment and tracking services for women, who work in essential services that are operating during the lockdown and have to walk alone in empty streets.

During the COVID-19 quarantine in Peru, between March 16 to April 15, 87 women and girls were raped, informed Lisbeth Guillén, spokesperson for the Manuela Ramos Movement, a feminist NGO dedicated to improving the situation and position of women in Peruvian society.

Due to the national lockdown, the Women’s Emergency Centers, run by the Ministry of Women, that provide psychological or legal support to women who come to make complaints of violence, have suspended the activities.

Guillén denounced this hindrance in assistance and demanded that the national government resume such services.

In addition, Guillén informed that the Manuela Ramos Movement has taken the initiative of digitally distributing a booklet with information that women can use in cases of violence during quarantine.

Similarly, feminist movements in other countries across the region have also directed their efforts in responding to the rise in gender-based pandemic amid the health pandemic. 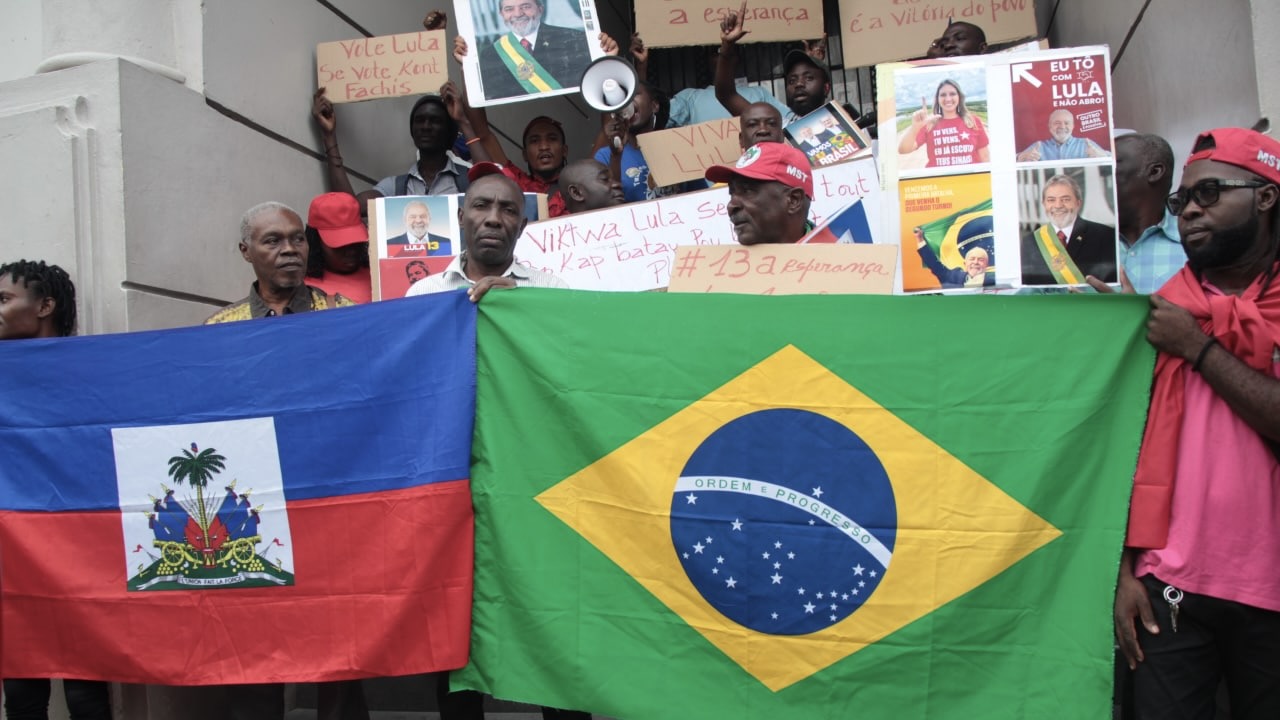