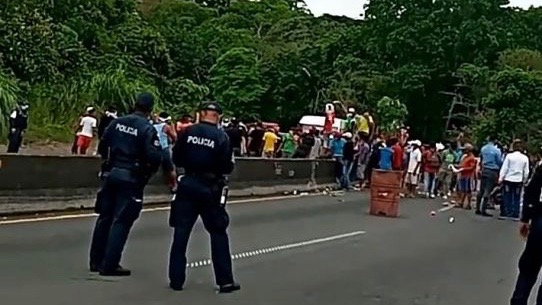 For the last two weeks, citizens of Panama have been protesting against the lack of government aid during the lockdown imposed due to the global COVID-19 pandemic. In the past two weeks, more than 25 incidents of highway and road blockades by protesting citizens have been registered in different parts of the country.

Yesterday, on April 29, hundreds of residents of four towns in the Guna Yala region, blocked the Pan-American highway at Loma Cová, in Arraiján district, for several hours. The protesters demanded the delivery of the solidarity vouchers, food bags and other aid promised by the national government under the Panama Solidarity Plan to economically help its vulnerable population.

A group of protesters reported that residents of some areas had been given bags of food, but that they were not enough for everyone. They informed that last week the government had sent 500 food bags for 5,000 people living in the area. While another group reported that no aid had come to their town.

In addition to Arraiján, demonstrations were also reported in the cities of Colón, La Chorrera, Pedregal and San Miguelito. People banged utensils, whistled and screamed that they needed to be taken care of.

A day before, on April 28, a large number of residents of the Felipillo town, located in the north-east of Panama City, also blocked the Pan-American Highway, for more than 12 hours. The residents denounced that they don’t have money to buy food and that they have not received any social aid from the government during a month of quarantine.

In the face of the difficult economic situation experienced by several Panamanian households due to the strict national lockdown, the center-left President Laurentino “Nito” Cortizo introduced the Panama Solidarity Plan in late March. President Nito announced that with this program, aid would reach at least 1 million people, and that local government representatives would be a part of the team that would deliver the vouchers and food bags, door to door. He directed the ministries of Social Development, Agricultural Development and Public Security, among others, to coordinate the distribution. An initial budget of 50 million ISD was announced to activate the program.

However, several social movements denounced an increase in irregularities in the distribution of aid with each passing day. They denounced that the majority of vulnerable people and families are being neglected and do not have access to aid distributed by the government, which forced them to take to the streets and break quarantine amid the health emergency. More than 30% of the country’s population lives in poverty and the lockdown has added to their misery.

Meanwhile, the government urged the people to remain calm and assured that it is working to deliver food bags across the country.

Yesterday, the president announced that the monthly vouchers of 80 USD redeemable at supermarkets by presenting personal identity cards had been activated.