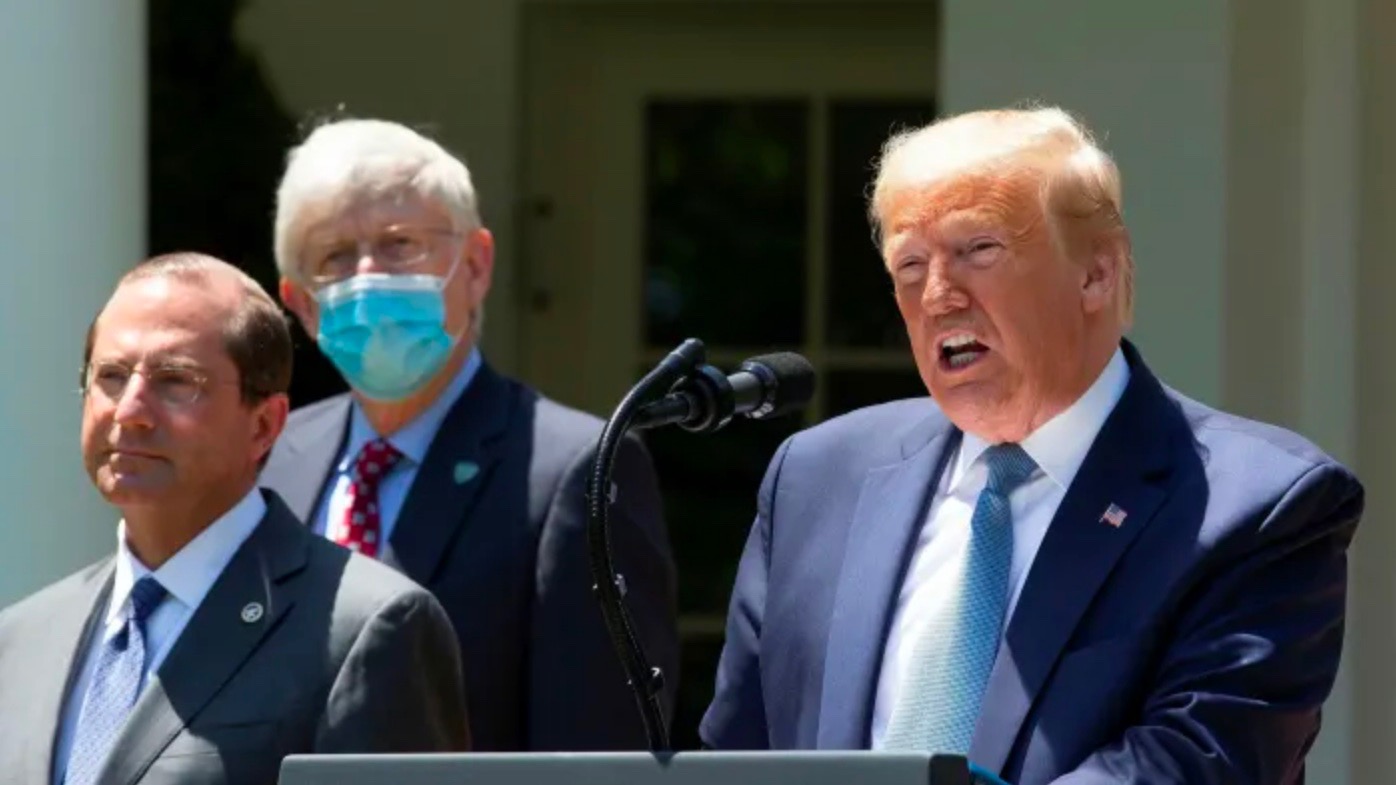 On March 20, just after the World Health Organization (WHO) declared a global pandemic on March 11, the US National Security Council (NSC) sent a cable to US State Department instructing officials how they should speak about China and the novel coronavirus, according to the Daily Beast, which obtained the cable. One section of the cable is called “NSC Top Lines: PRC [People’s Republic of China] Propaganda and Disinformation on the Wuhan Virus Pandemic.” The cable says, “Chinese Communist Party officials in Wuhan and Beijing had a special responsibility to inform the Chinese people and the world of the threat, since they were the first to learn of it.” Instead, US officials were instructed by the cable to contend, the Chinese government “hid news of the virus from its own people for weeks, while suppressing information and punishing doctors and journalists who raised the alarm. The Party cared more about its reputation than its own people’s suffering.” The cable suggests the NSC instructed US officials to trumpet this narrative, and to say instead that the United States must be thanked for its “extraordinary humanitarianism.” “The United States and the American people are demonstrating once again that they are the greatest humanitarians the world has ever known,” the cable continued.

There were two immediate reasons for the US to blame China for the novel coronavirus global pandemic. First, it was a convenient way to divert attention from the fact that the US government had done nothing—despite months of notice—to effectively prepare for the arrival of the virus. Second, it was a necessary way to undermine the remarkable way China had been able to tackle the epidemic, with massive infusions of personnel and equipment as well as relief into Wuhan and Hubei province. US President Donald Trump’s attack on China is explained not as the rant of an unstable individual, but as part and parcel of the agenda of the US government to displace its own incompetence onto China, and to ensure that China does not receive credit or associated benefits on the world stage from its own swift public health response.

On December 31, 2019, Chinese authorities contacted the Beijing office of the World Health Organization and informed them about an outbreak of pneumonia of unknown origin observed in late December; on January 3, Dr. George F. Gao—director of China’s Center for Disease Control and Prevention (CDC)—spoke to Dr. Robert Redfield—head of the US Centers for Disease Control and Prevention (CDC)—about the “severity of the virus,” and Gao “burst into tears.” This was just a few days after the first cases of the mysterious pneumonia were detected in Hubei. A high-level team arrived in Wuhan from Beijing on December 31 to investigate the as yet unknown virus, the same day that the Chinese authorities informed the WHO. Trump’s administration was first formally notified about the outbreak in China on January 3. The United States government, in other words, was personally informed about the danger of the virus within days of when the Chinese government told the WHO.

On January 1, the WHO set up a team across three levels of its organization (regional headquarters, country-level, and headquarters) to address the outbreak, and the next day, the WHO alerted all levels of its organization to the emergence of this virus, according to its situation report. The WHO announced publicly that the Chinese authorities had informed it of “a cluster of pneumonia cases—with no deaths—in Wuhan” on Twitter on January 4 and publicly released its first risk assessment on January 5. On January 3, Dr. Redfield of the US CDC informed the US Department of Health and Human Services, whose leader—Secretary Alex Azar—is a cabinet rank official. Azar was picked by Trump not for his government experience, but for two other reasons: first, Azar is known to be fiercely loyal to Trump, and second, he comes from the pharmaceutical industry (from 2012 to 2017, Azar was the head of the US division of Eli Lilly, one of the world’s largest drug companies, and he was on the board of the Biotechnology Innovation Organization, a trade association of the drug industry). Azar informed the National Security Council, which he is obliged to do. But he did not brief President Trump with the actual facts. In fact, as the Wall Street Journal reported, Secretary Azar “waited two weeks to brief the president on the potential severity [of coronavirus], calling him to assure him the agency was ready to handle any cases in the US.”

Dr. Rick Bright, a US government scientist who headed the Biomedical Advanced Research and Development Authority, said that he warned the government in January that the US must prepare for the virus. Azar did nothing. When asked why Azar downplayed the threat of the virus by CBS on May 18, Bright said, “You know, I don’t know why he would do that.” Not only was the government not being clear with the public, but it also ignored the warnings from private companies that said the supply chain for medical goods was “running dry,” according to Bright.

On January 20, Chinese medical authorities announced the virtual certainty that the virus could be transmitted between humans; this was validated by the WHO on January 22. The announcement led to the shutdown of Wuhan and soon thereafter of Hubei province. Trump and Azar did nothing but downplay and ignore the threat of the coronavirus—despite the fact that the first US case of coronavirus was confirmed in Seattle on January 21. On January 28, Azar said that Americans would find that the virus “should not be an impact on their day-to-day life.” On the day that the WHO declared a public health emergency of international concern—January 30—Trump said, with no evidence, “we think we have it very well under control.” He did not declare a national emergency (Azar declared a public health emergency the next day, which meant merely that agencies could reallocate personnel and resources to deal with the virus). Trump set up the first task force on January 29—by which time there were already five known cases of coronavirus in the United States. The declaration that set up the task force maintained that “the risk of infection for Americans remains low.” The task force and any other actions taken by the US in response to the coronavirus were hollow. For instance, Azar did not clear labs to conduct testing until February 29—an entire month after declaring the US public health emergency; this has had catastrophic impacts on the ability of local governments to do contact testing and to manage the spread of the disease.

Right through January, February, and March, Trump minimized the threat. His Twitter feed provides all the necessary evidence. On March 9, Trump likened the virus to the “common flu”; “Think about that!” he tweeted. Two days later, the WHO declared a global pandemic. On March 13, Trump declared a national emergency; this was six weeks after the WHO had declared a public health emergency of international concern. These six weeks might have been used in crucial prevention, contact tracing, testing, and other planning efforts to combat coronavirus and lessen the infections and deaths, but were lost.

The March 20 cable with the NSC’s instruction to attack China’s response to coronavirus was likely led from the very top. On March 10, Trump retweeted the right-wing commentator Charles Kirk who wrote, “With China Virus spreading across the globe, the US stands a chance if we can [get] control of our borders.” That day, Dr. Redfield appeared before the US Congress for a hearing. When Representative Lois Frankel (Democrat from Florida) asked Dr. Redfield if, “It is absolutely wrong and inappropriate to call this the Chinese coronavirus,” Dr. Redfield answered that he agreed with her. The WHO had anticipated this. On February 14, the WHO’s Director-General Tedros Adhanom Ghebreyesus called for “solidarity, not stigma.” This is what Dr. Redfield recognized, but it was precisely what the US government denied.

On March 16, Trump wrote on Twitter, “The United States will be powerfully supporting those industries, like Airlines and others, that are particularly affected by the Chinese Virus.” This was when the incendiary term “Chinese virus” entered wide circulation. It was part of the campaign to blame China for the epidemic and to suggest that China should receive no credit for its remarkable fight to contain the outbreak. Trump’s Secretary of State Mike Pompeo used the term “Wuhan virus,” and the entire administration and the far-right press—as well as “moderate” Democrats, including Trump’s 2020 presidential election challenger Joe Biden—began to blame China for the outbreak.

By March 16, when Trump was going on about the “Chinese virus,” there were 88 deaths in the United States by the novel coronavirus. About a month later, more than 50,000 people in the US died from the lethal virus, far more than died in China. Rather than look deep into the record to see how the US had destroyed its own public health system by austerity, how the US government had disparaged a science-based approach, and how the US had ignored the warnings from the Chinese and from the WHO, the Trump administration and the entire US political class finds it easier to blame China.